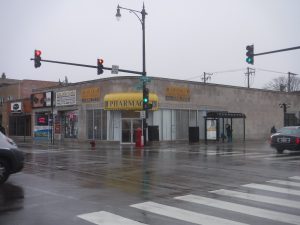 Kedvon Pharmacy is one of the handful of Russian businesses still remaining near Devon/California intersection. (Photo by Igor Studenkov/for Chronicle Media)

As recently as the early 2000s, the section of Devon Avenue between Fairfied and Francisco avenues had plenty of Russian stores and other businesses with signs in the Cyrillic alphabet.

There are still a few signs of the old shopping strip here and there, but these days, most of the businesses along the strip are run by immigrants from Iraq, Syria and other Middle Eastern countries. This was due to the shifts in the population, as well as the broader changes in customer buying habits. But while Chicago may no longer have a Russian commercial district, there are still plenty of Russians living in the city — and there are plenty of programs and events that bring together the community that has spread across multiple neighborhoods and suburbs.

Russian immigrants have been coming to United States since the 1860s, with the first major wave arriving in 1880s. According to the Chicago History Museum’s Encyclopedia of Chicago, the population labeled as “Russian” at the time weren’t all, strictly speaking, ethnically Russians. It included other ethnic groups that lived in the Russian Empire, including Ukrainians, Belarusians and Russian Jews. The latter tended to settle around Maxwell Street, while Slavic groups tended to settle in the West Town community area. Over the next few decades, the populations shifted, with all groups moving further north and west. By the 1960s, the West Ridge community became a major destination for the Russian Jewish community.

But the immigrants that wound up establishing the Devon commercial strip belonged to a later wave. According to Julia Bikbova, the principal immigration attorney at Chicago-based Bikbova Law, it had its roots in the late 1960s, when Israel lobbied the Soviet government to allow its Jewish population to immigrate — which it did. But this alarmed the American Jewish community, and many Soviet Jews that did want to leave the Soviet Union had their concerns as well. 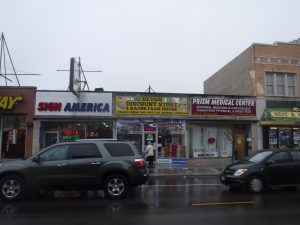 As the result, a compromise was reached. Soviet Jews were allowed to leave on Israeli visas, but they didn’t necessarily have to go to Israel. Italy was established as a transfer point, where Soviet Jews that wished to immigrate to United States would wait while they applied to be accepted as refugees.

That said, the Soviet Union did not necessarily allow everyone who wanted to leave, with restrictions ebbing and flowing depending on the state of its relationship with Western powers. As Bikbova noted, after the USSR invaded Afghanistan in 1980, the immigration virtually stopped.

In the mid-1980s, the more open attitudes brought on by Mikhail Gorbachev taking power caused the restrictions to loosen. The number of refugees increased dramatically, beyond what the United States could accept. In the 1990s, the Lautenberg Amendment, which was sponsored by U.S. Senator Frank Lautenberg, made it easier for Russian Jewish applicants to prove their refugee status, causing a further surge.

“[Lautenberg] is the man to whom the second wave of immigrants owes everything,” Bikbova said.

The collapse of the Soviet Union in 1991 led to another immigration wave, as Jewish and non-Jewish Russians came into United States in search of the better opportunities.

Alla Dekhtyar left in 1989 with her baby daughter and two suitcases, all in a dim hope that she would be able to find something better.

“I didn’t know a single person in United States,” she recalled. “I don’t know a word of English. I was a musician. And that’s it. In my head, I only had one thought — to survive.”

While Dekhtyar herself settled in Rogers Park, near the lake shore, most immigrants moved to West Ridge, near Devon Avenue. There were several reasons for that. A number of social service agencies catering to the new arrivals were located near the intersection of Devon and California avenues. And, according to Dekhtyar, the proximity to synagogues and access to educational opportunities helped, too.

“There was a school on California, two blocks south of Devon,” she said. “There were loads of Russian children, there were English as a Second Language classes.”

According to Irving Loundy, Vice President of the West Ridge Chamber of Commerce, some of the first businesses included the Argo Georgian Bakery, the Kedvon pharmacy, Moda clothing store and Russian Books and Souvenirs, which most members of the community knew as Ilya Ryudyak’s Russian Books. 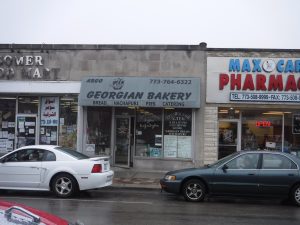 Dekhtyar said she had fond memories of that last store in particular.

“You could ask [owner Ilya Ryudyak] for a book printed in 1963, and he went up the ladder, grabbed a book,” she said.

A number of other stores would emerge, including Three Sisters grocery store, Elita Video Russian movie and music store.

But even in the early 1990s, not all of the new arrivals stayed near Devon.

“Everyone who was a little rich — and there wasn’t a lot of them — [and whose] kids were school age, they went to Skokie,” Dekhtyar said.

While she said that the quality of schools was a major driver, the fact that Skokie was located near West Ridge and already had a large Jewish community didn’t hurt, either.

The trend only accelerated as kids got old enough to attend to high school. By the mid-1990s, a growing number of Russians who were looking to buy homes moved to Niles. Des Plaines, which was located near O’Hare International Airport, became a major destination for new arrivals and more established immigrants alike. But Dekhtyar said that, for a while, Devon was still a center of Russian cultural life.

She said if there was one major thing that defined the Russian community, is its appreciation for arts and culture. Back in the Soviet Union, she held an unsanctioned poetry salon. She said that she didn’t think she would put together anything like that in United States — she had to work and raise a child. But about five years after she arrived in Chicago, a friend of hers contacted her, saying that she wanted to bring Sergey Gandlevsky, a famous Russian poet, to do a reading in the area. She asked Dekhtyar to see if she could arrange a venue. Dekhtyar jumped at the challenge, trying to contact every person she knew — which, by her own account, wasn’t that many people. But word spread, and the event wound up bigger than she could have imagined. 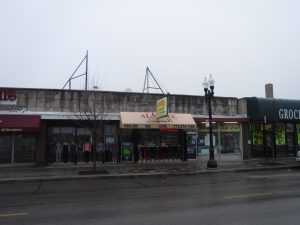 “In the end, I did [the reading] in two different houses of my friends,” Dekhtyar said. “There are always people who want — they are ready to have their house to put on something like this.”

This evolved into the Chicago Russian Literary Salon reading series. Now in its 23rd year, it went through several different venues, hosting poets, prose writers, filmmakers and musicians. While Dekhtyar said it has occasionally been a struggle at times, because she didn’t have large fundraising apparatus, the fact that it is still going showed just how important those kinds of events are to the community.

As 2000s wore on, the Russian community continued to move farther from the city. The ones particularly well-off tended to settle in Northbrook, while middle-class residents gravitated to Buffalo Grove and Wheeling.

Dekhtyar said that the search for better schools is a major reason — but she also felt there was another, darker reason why many left.

“The people who are older want to move to the areas where there aren’t [as many] Mexicans,” she said. “And it’s painful, because they raise kids, and [the kids] don’t understand what their country is.”

By late 2000s, more and more businesses closed. A few old stalwarts, such as the Georgian Bakery and Kedvon, are still open, but all of the video, music and book stores have closed, as have Three Sisters. Michael’s Green Store, a vitamins and supplements store, doesn’t have any Russian signage, but it does sell Russian health magazines and greeting cards.

Both Loundy and Dekhtyar said that the closures due to decline in the Russian population, as well as changes in buying habits. For example, in the age of Amazon and Netflix, there is less need for stores that sell physical books and CDs. Dekhtyar also noted that there is less need for Russian food stores, because grocery stores such as Rogers Park’s Devon Market and Fresh Market chain, which has locations in both the city the suburbs, serve a wide variety of ethnic groups, including Russians.

And as the Russian moved to the suburbs, some businesses followed them, and new Russian businesses opened up. The City of Joy, a small Russian bookstore chain, has locations in Wheeling and Skokie. Wheeling is home to a Moda Too store. And cultural events still bring together the Russian community from all across Chicagoland. Glenview’s Christian Heritage Academy regularly hosts musical performances and other events. When the Niles Public Library launched a Russian-language children’s storytime series in 2013, families of came from Buffalo Grove, Des Plaines, Glenview and Wilmette.

Back along Devon Avenue, the storefronts that used to be occupied to by Russian businesses haven’t gone empty, as clothing stores, grocery stores, video stores and other businesses established by Assyrians, Iraqis and immigrants from other Middle Eastern countries have moved in.

“I respect anyone who wants to start something new, and open something new,” Dekhtyar reflected. “But it’s scary to think that there are [businesses] that just left.”

Loundy said that, while the corridor is facing some challenges, it still has its strengths, too.

“I would say it is [a good place to do business],” he said. “It is still a major thoroughfare of the community. It may not be doing [as well] as they did in the past, but some businesses are doing quite well.” 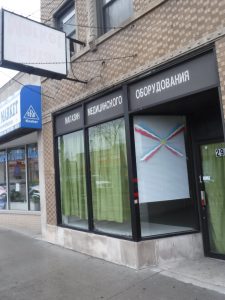 Many Russian-speaking seniors still live near Devon Avenue. And, according to the 2010 U.S. Census estimates, 28,264 people identified as Russian/Russian-American on the census

live in Chicago, 4,561 of whom are foreign-born. 1,180 of them entered Chicago in 2000 or later. Looking at the ancestry data, 2,095 people reporting Russian ancestry live in West Ridge.

Dekhtyar said that, from what she has observed, many Russian-American children born to parents who came during the previous immigration waves, much to their elders’ bewilderment.

“[They say] ‘I don’t understand why the children who are [now] adults, who get married, want to live in the city, it’s nice and peaceful [in the suburbs],’” she said.

But it is a development Dekhtyar welcome.

“There are a lot of talented youth moving to Chicago, and they are doing some great things,” she said.

Pioneer Press columnist Lee Litas, who left the Soviet Union with her family in 1975, summed up her feelings about the current state of the Russian community:

“They worked hard to become self-sufficient quickly, to integrate into their new home and culture but they did not forget their roots,” she said. “They were always grateful for the help they received from organizations like [Hebrew Immigrant Aid Society] and [New York Association for New Americans] to get out of the hell that was the Soviet Union.”

— A look back at Devon Avenue’s Russian-American community