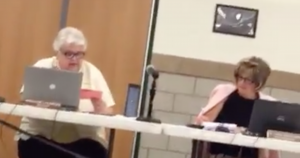 Asbestos violations found at Lyons Elementary D103 racked up $20,000 in fines from the Illinois Department of Public Health in May, the school board and superintendent acknowledged at a July 24 board meeting.

Former school board member Deanna Huxhold obtained an IDPH civil penalty notice via the Freedom of Information Act and presented it to the board.

“Why should we, the taxpayers, pay these fines for $20,000? This is stealing from the children’s education,” Huxhold said.

Notice of the fines was addressed to former board President Michael Bennett, but should have been delivered to the newly elected President Marge Hubacek.

After the meeting, Hubacek acknowledged that she did not see the letter until two weeks after it was delivered. Supt. Carol Baker said she received the letter and forwarded it immediately to the district’s law firm.

The fines, at $1,000 each, were for 20 violations found at a “records review” visit in March. The state board of health and the Cook County Environmental Control agency visited the district after a February incident where asbestos dust was dislodged during the renovation of floor tiles in the administration building. The dust triggered smoke alarms, which sent the Lyons Fire Department to the district administration building to investigate. Records from the fire department obtained via FOIA confirm the call around 10:30 p.m.

No mention of floor tiles or the February incident appeared in the investigators’ violation list. The list did cite a violation for allowing unlicensed persons to remove transite ceiling materials from another district building.

The violations also included failure to properly train employees in the Asbestos Abatement Act and Code and improper notices for parents and staff. The district failed to identify and train a person to serve as asbestos manager and failed to file an asbestos management plan.

The district will participate in a phone pre-hearing conference scheduled for May 8. Before then, the district must hire certified personnel to help develop an asbestos management plan. The board tabled an “emergency” contract for help getting the district into compliance. The vendor, Hinsdale-based K-Plus Engineering, is part of a family of firms formerly affiliated with former Metropolitan Water Reclamation District Commissioner Terrence O’Brien. O’Brien, who ran unsuccessfully for county commissioner, has been a campaign contributor to political campaigns of Lyons Mayor Christopher Getty.

At an Aug. 1 special meeting, the board was to consider two proposals for an asbestos manager, either from K-Plus or their former asbestos contractors, Yorkville-based Midwest Environmental Consulting Services.