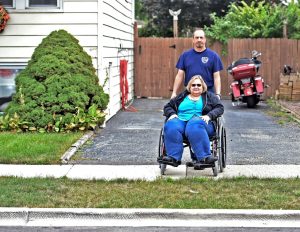 Sandy and Michael Donigain’s driveway was curbed off by the Village of Lyons in fall of 2015, causing mobility problems for Sandy. (Chronicle Media)

A woman with a disability and her husband settled June 22 with the Village of Lyons in a federal lawsuit to replace the driveway apron and curb cut the village removed from her property in fall of 2015.

Thirty-year resident Sandy Donigain, who uses a wheelchair, said she had been “a prisoner in my own home” on the 4400 block of Ana Avenue without vehicle access to the driveway that allowed her to park near her back door. Also upsetting during the suit were documents from the village produced in discovery, that appeared to be screenshots from Sandy Donigain’s home computer, she said.

Federal Magistrate Judge Sidney I. Schenkier ruled that the village must replace the apron and curb cut within two weeks. The Village of Lyons was also ordered to pay the Donigains’ legal fees and “a little something extra for us,” Sandy Donigain said.

Sandy said no one really noticed when the village passed an ordinance in spring of 2015 that any side driveway that did not lead to a garage would be curbed off during alley reconstruction, and aprons would be removed unless residents promised to build a new garage or modify an existing one.

But then the village received Community Development Block Grants (CDBG) to partially pay to repave about one third of the streets in Lyons, a town of 2.2 square miles.

As street crews began to repave streets in 2015 and summer of 2016, residents received notices that they would lose access to their side driveways, some of which had been there for decades.

“I understand some houses in Lyons were built with a side driveway meant to allow the owner to build a garage later,” Sandy Donigain said.

In her case, the driveway was already there when Donigains purchased the house in the 1980s with her father, who she said, was an amputee and also used the driveway to park close to the house.

After the driveway was cut off, the Donigains begged the village to install a handicapped parking sign in front of their home, but were told Sandy needed a handicapped license plate, not the placard she used, to qualify.

“The state told me the placard and the license plate were the same thing,” Sandy said. She was unable to attend cardiac therapy appointments because she couldn’t get out of her house to the car while her husband was at work, she added. “This whole thing may have caused permanent damage to my health. It’s been exhausting and frustrating.”

After months of what Donigains called lack of response from the village, they asked for the apron to be replaced, based on Sandy’s physical hardships and were told that would happen. But it did not, said the Donigains’ attorney Jeff Hagen. He filed a suit in March alleging the village was discriminating against the Donigains under the Americans with Disabilities Act.

The village responded to the suit April 25, denying all of the Donigains’ allegations, but then offered to meet for a settlement conference.

“I felt bad that taxpayer money would be used to pay our lawyer bills, but then I found out the village has insurance that would pay,” Sandy said.

“The girl deserves a gold medal,” said Lyons resident JoAnne Schaeffer, whose driveway was also blocked off by the new village code when her street was repaved. Schaeffer said her husband also has problems walking and the family used the driveway to park closer to the house.  Schaeffer begged the village board to spare her driveway apron at a public meeting and got nowhere, she said.

The Donigains estimate 140 homes in Lyons are eligible under the new rules to have aprons removed and curbs blocking driveways.

“We thought some other people might want to be part of a class action, but they were unwilling to put up the money, and I understand that,” Sandy said.

Donigain said she was further alarmed during the settlement hearing to see some documents that looked like screen shots from her private computer produced by the village during discovery.

“The documents looked like someone got into my personal email,” she said. “There were screen shots easily identified as my tree of folders, and personal emails between me and the attorney, me and my son, even some work stuff,” she said. “I wanted to know how they got into it.”

Attorney Hagen confirmed that documents produced in discovery appeared to have been screen captures of personal emails. But Hagen declined to elaborate about the case, saying the village and his clients were still in negotiations.

“I feel like we should break out a bottle of champagne and christen the driveway when it’s done — like a ship,” Sandy said.