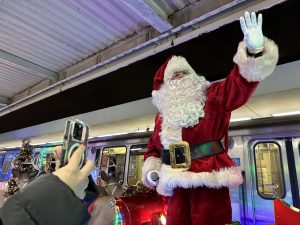 Santa and his fan gallery at the Brown Line Kimball stop of Allstate CTA Holiday Train in Chicago.

The holiday train, much loved by many families, began dashing through the snow and all other weather on the Friday after Thanksgiving.

Inside the train, expect to be seated on holiday green and red seating, depending on ridership numbers when you go.

Photographs of CTA holiday elves are included in spots that riders would normally see as advertisements placed on regular CTA trains.

As in previous years, Santa and his reindeer ride along outside the train, traveling from rail line to rail line to greet children and families along published stops. 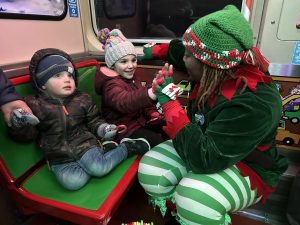 Spicy the Elf engages with (from left) siblings Leo, 3, and Maxine, 5, of Roscoe Village who were riding on the Brown Line of the Allstate CTA Holiday Train on Dec. 1 in Chicago.

“We’re excited to spread holiday cheer with our riders aboard the Allstate CTA Holiday Train as it travels on all of our rail lines this season,” said Maddie Kilgannon, CTA spokesperson.

“Thirty-one years later, we’ve continued that tradition and have distributed more than 10,000 food baskets thanks to the generosity of CTA employees,” Kilgannon said.

On the first day of December, a Thursday, riders packed the cars of the holiday train on the Brown Line. Outdoor temperatures were a frosty 34 degrees. If people waited for the holiday train, many folks were seen using the CTA’s popular platform heaters. 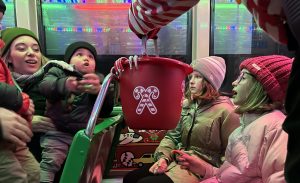 Candy canes and holiday buttons are offered to children on the Brown Line of the Allstate CTA Holiday Train on Dec. 1.

Riding the Brown Line was Arlene Johnston of Edgewater, a caregiver who chaperoned Roscoe Village siblings Leo, 3, and Maxine, 5.

“Oh my gosh, they’ve been waiting for it for a while now,” Johnston said, noting that the children were, “excited” and “just looking forward to it.

“I picked them up from school and that’s all she’s (Maxine) been talking about.”

Maxine jumped up and down on the platform waiting to see the holiday train approach. The sunset offered pink, purple and soft orange hues on a crisp evening.

Then all of the sudden, the holiday train brightened the rails from a distance, looking much different from plain trains that had already approached.

“It is magical,” Johnston said of the experience. 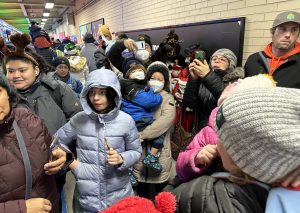 When asked what she wanted from Santa Claus for Christmas, Maxine said, “Everything!”

Leo said he wanted Santa to bring him, “Cars.”

Johnston has hopes for the holidays that include, “I just want everybody to be safe, to have fun, to enjoy the time and just be happy…be happy, and being healthy.”

Johnston, Maxine and Leo hopped aboard with other smiling holiday train fans. Johnston took photos of Maxine and Leo with Spicy, the CTA onboard elf.

This year’s design is red featuring a snowman with carrot nose.

A passenger named Taylore from Chicago reported to be having, “a blast.” 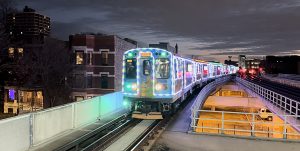 The Brown Line of the Allstate CTA Holiday Train comes to a stop on Dec. 1 in Chicago.

Elf McJingle said, “I like the smiles and the excitement from the kids and even the adults.”

Spicy the elf said about her job, “It brings me a lot of excitement.”

“I hope that she experiences the joy of Christmas,” Penelope’s mother said about what she hoped for the holidays for the child.

To the CTA, “Thank you so much, we appreciate it,” Penelope’s mother said.

“The love and the hope that you guys share in the holiday season is perfect for these kiddos,” Hannah Patterson added.

At the Kimball stop, Santa Claus revealed what he would like for Christmas.

Santa would, “like everybody to get along” and “peace.” 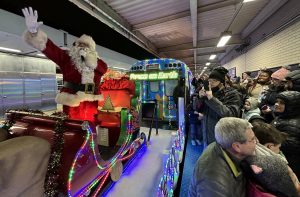 Santa Claus at the Kimball stop of the The Brown Line of the Allstate CTA Holiday Train in Chicago.

Customers looking to catch a ride or picture can follow the Allstate CTA Holiday Train via CTA Train Tracker at: thttps://www.transitchicago.com/traintracker/.

Look for the candy cane icon to find the Allstate CTA Holiday Train and when it might be getting close to your neighborhood station.

Fans also can see where to hop aboard the Allstate CTA Holiday Bus by tracking its location at: https://www.transitchicago.com/holidaybustracker/.