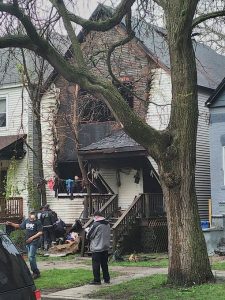 Chicago fire personnel examine the scene of a fatal house fire Thursday, May 14, in the city’s Englewood neighborhood. A man died in the fire at 6916 Union. Fire officials said the home did not have smoke detectors. (Chicago Fire Department photo)

A man was killed in a fire Thursday, May 14, in Chicago’s Englewood neighborhood.

A 62-year-old woman was able to get out of the residence on her own, according to police.

Another man was found dead on the second floor of the residence, fire and police officials said.

There were no smoke detectors in the home, according to fire officials. The cause of the blaze is under investigation.

Fire officials said the two surviving individuals were transported to a local hospital for treatment.