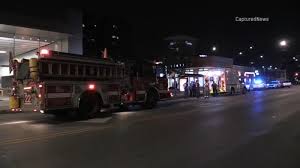 A man was critically injured Wednesday morning (July 1) when stabbed on the CTA Red Line.

Chicago police said a 33-year-old man on a Chicago Transit Authority Red Line train on the 1500 block of North Clybourn got into a physical altercation with an offender, who produced a knife and stabbed the victim.

Police said the victim exited the train and an officer discovered the victim with a stab wound to the left side of his chest. He was taken to Illinois Masonic Hospital in critical condition.

No offender was in custody. Chicago police Area 3 detectives are continuing to investigate the incident.