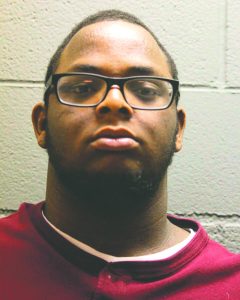 A Matteson man has been charged after Cook County Sheriff’s Police allegedly recovered two loaded firearms, during a traffic stop in Ford Heights.

At 5:30 p.m. Feb. 6, Sheriff’s Police pulled over a vehicle at Woodlawn Avenue and Route 30 in Ford Heights after a check of the license plate allegedly revealed the driver’s license was suspended.

After stopping the vehicle and making contact with the driver, Keith Owens, 24, of Matteson, deputies said they detected a strong order of marijuana inside the vehicle.

A search of the vehicle led to the recovery of a loaded .38 caliber handgun and a loaded 9 mm handgun, deputies said, in addition to hundreds of rounds of ammunition, a hunting knife, two black ski masks and a bag containing what was believed to be marijuana.

Owens was charged with unlawful use of a weapon. Additional charges are possible, police said.