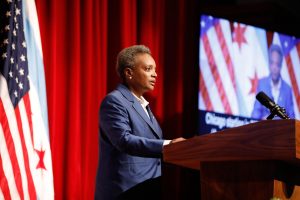 Chicago Mayor Lori Lightfoot delivers her first State of the City Address. She said she cannot rule out any options, including property taxes, for filling a $838 million budget gap. (Photo courtesy of the City of Chicago)

Chicago Mayor Lori Lightfoot says that the city must come together to face its tough fiscal problems and that she will look to join forces with other municipalities in the state to tackle pensions and other issues.

“Our fates are intertwined,” Lightfoot said of other parts of the state during her State of the City Address on Aug. 29. “That is why I intend to continue working with Governor (J.B.) Pritzker, the legislative leaders and other state lawmakers, regardless of party or geography. Illinois is only as strong as its cities and towns.

“We have to do the right thing and work together to solve this problem once and for all. I am willing to lead this charge, but I need you to join me.”

“For every dollar you pay to the city, 80 cents goes to pay the cost of personnel and benefits, along with pensions,” Lightfoot said.

The mayor said that steps to close the budget gap will include a graduated real estate transfer tax where the owner of a home valued at more than $500,000 will pay more when selling a home. She said her administration is also exploring revenue options that address rampant congestion, pollution and other issue, without detailing what those possible options could be.

Lightfoot said money from the marijuana industry will be counted on to close the budget gap, but that the industry’s recreational expansion into Chicago must create “new business and job opportunities for black and brown people who have been the victims of the War on Drugs, and who to date, have mostly been excluded from the legitimate medical and recreational markets as entrepreneurs.”

She said a Chicago casino would provide a dedicated revenue stream to address pension costs. 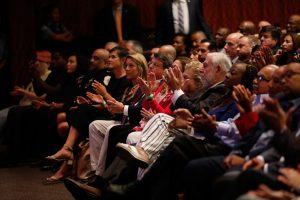 Audience members applaud during the mayor’s State of the City Address. Lightfoot said a Chicago casino would provide a dedicated revenue stream to address pension costs. (Photo courtesy of the City of Chicago)

“If we get the tax structure right, this will represent a structural solution to address long-term problems, not a one-time fix,” the mayor said.

Lightfoot said she wants to avoid turning to property taxes to fill the budget gap at all costs, but did not rule out such an option if other efforts don’t work.

“As your mayor, I cannot in good faith promise you that I will take any option off the table to tackle this crisis, whether it’s through budget reductions or by raising revenue,” she said. “What I can tell you is that I will work tirelessly to ensure whatever option we take will be made with transparency and with working folks in mind.”

Lightfoot said that she will conduct four budget town hall meetings across the city to hear from residents, including young people.

Those meetings will be:

“As I said on Inauguration Day, we should never settle for dividing up a shrinking pie or pitting one part of this city against another,” Lightfoot said. “Yes, some of our solutions will be hard. Yes, they may involve putting ourselves at risk; and if it means that I sacrifice myself politically, so be it in pursuit of the right thing.”

She said that only by working together as a city and state can a brighter future be created.

“Now is the time,” Lightfoot said. “Together, let’s seize this moment to do the right thing, to chart a new course and put our city on a stronger path once and for all.”

Adam Schuster, budget and tax research director at the Illinois Policy Institute, gave Lightfoot an A-plus for taking the steps to layout the scope of the financial problem facing the city and the seriousness of the problem.

He said Lightfoot hit on the constraints that are keeping the city from succeeding.

“She touched on the need to stop the outflow of residents, on overtaxed businesses and her reticence to raise property taxes,” Schuster said.

The Illinois Policy Institute budget director said it is unclear if Lightfoot is supportive of a state constitutional amendment addressing pension reform.

“(Mayor Rahm) Emanuel did endorse the amendment, but it was on his way out the door,” Schuster said.

Schuster said the institute’s position is against any tax increases in the city.

“We think residents are already overtaxed,” Schuster said. “That is part of the reason the city has lost population four years in a row.”

He said Chicago will not be able to meet its required pension payments in a couple of years without structural pension reform at the state level.

Schuster said pension reform is simply the right thing to do as more municipalities are seeing mounting pension debt.

“There are 650 pension funds, especially police and fire pensions funds, across Illinois that are badly underfunded and facing insolvency,” Schuster said. “Without changes to the system, Rockford, Peoria and other cities are going to be hurt. We need a real solution.”