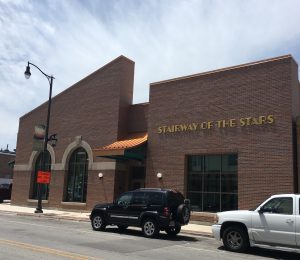 The new Stairway of the Stars building on 5th Avenue in Maywood. The three dance studios are packed morning to night, six days a week over the summer.

Seven years ago this March, the much beloved Stairway of the Stars dance studio in Maywood burned to the ground. While the fire was a devastating blow, its founders say it was just the latest in a series of obstacles they have overcome in 50 years of serving the youth of their hometown.

Lifelong Maywood residents Lois and Ernie Baumann’s current challenge is finding funding to retire the last $200,000 of a $2.1 million capital program to rebuild the dance studio, and additional funds to do needed remodeling at their second building.

Twenty years ago the Baumanns, who raised their six children in Maywood, turned their business into a 501(c)(3) non-profit under the name Maywood Fine Arts Association and purchased a second building across the street, the former Maywood Bank. In that time they have added tumbling, music instruction, acting and martial arts to their offerings.

Their website states they are “Dedicated to providing high quality arts instruction to the children of Maywood and surrounding communities.”

“We have 1,000 children a week come through our programs,” Lois Baumann said. Of those children, 72 percent are African-American and 21 percent Hispanic. Most are lower income.

“We offer diversity, quality and affordability,” said her son, Spooner, who teaches photography at the MFAA.

Baumann said her hometown is still suffering the effects of rampant “white flight” in the late ’60s amid fears over racial unrest and upheaval. Not only people but businesses left the village, devastating its economy and tax base.

But the Baumann’s choose to stay.

“I grew up in Maywood,” Lois Baumann said. The village’s children, she insists, deserve the opportunity to make their dreams become reality, whatever their economic status.

“We felt like we could make a difference. That we could have a positive, energetic place for the children.”

Starting in 1967, Lois and Ernie started teaching dance “wherever we could,” In recreation centers and church basements. In 1979, they leased the large third-floor space at 20 N. 5th Avenue, above the Walther Lutheran School’s Bronco Resale Shop, and founded Stairway of the Stars.

In 1996, with hundreds of children then enrolled at their dance studio, they incorporated as the Maywood Fine Arts Association, and purchased the former bank building.

In 2010, their dance studio burned to the ground, but it didn’t stop the dance classes.

“We were dancing the next day, in the basement of the 1st Congregational Church,” Spooner Baumann recalled. “We lost one day.”

The new Stairway of the Stars was in full use earlier in the month, as nearly 70 kids aged 7 years to teenage filled all three studios during the “dance intensive” that runs for five weeks, six hours a day.

Spooner Baumann  said the facility will get more crowded after June 15, when Chicago school let out for the summer, and another 15 kids are scheduled to participate in the dance intensive.

“We draw kids mostly from the (West Side) Austin Neighborhood,” he said.

Two weeks before the summer intensive program started, Stairway of the Stars put on their annual dance show. This year’s event, titled “Whale of a Tale, featured 335 aspiring dancers aged three to 18, all fully costumed. 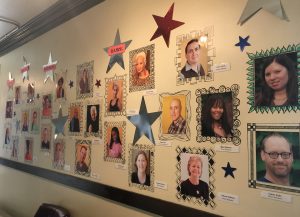 Stairway of the Stars boasts an impressive list of accomplished dancers, the most notable being Craig Hall, who started dancing at Stairway of the Stars as a four year old. He retired from the New York City Ballet after a long career as a featured dancer and now runs his own dance studio.

Lois and Ernie’s daughter Purdy was a Rockette in the iconic dance organization’s traveling troupe. Another daughter, Heidi, is the organization’s choreographer, dance instruction manager and all-around go-to person.

And Heidi’s daughter, Olivia Renteria, has performed in numerous theater productions around the Chicago area, including Brigadoon at the Goodman Theater.

But more than producing stars of the stage, both Spooner and Lois Baumann say, the organization is dedicated to producing disciplined, confident young people who become stars of their own lives and assets to their community. Every child, they insist, should have the opportunity to realize their dreams, no matter what their economic status.

“One of the most positive things is the students who leave us when they enter college, and come back and tell us they’re in a dance troupe,” said Lois Baumann. “My graduates all seem to be able to get good jobs teaching dance or tumbling.”

Baumann proudly points to the program’s latest success story, former MFAA student Erin Dunn, 19, who is working at Stairway of the Stars on her summer break.

“She’s a head assistant for our dance intensive,” Baumann said. “We have to have good people with good ideas coming into neighborhoods like ours.”

Personal qualities are particularly important in hiring people who work at the MFAA, says Spooner, who notes the organization “is like a family.”

“You have to have the right personality,” he said of the instructors. “Somebody who actually cares about the community. It’s not just a job.”

What the Baumann’s say they need now is for someone or some foundation to care for them and what they are accomplishing in Maywood.

The MFAA’s managing director, Katherine Bus, who handles the numbers side of the business, said the final $200,000 is proving to be a challenge for the nonprofit.

Bus said a major challenge in being located in Maywood is that there are not a great deal of business in the community.

Three funding sources the MFAA hoped to access this year have not panned out. That resulted in the MFAA having to postpone remodeling several spaces on the third floor of the old bank building and installing air-conditioning in the old structure.

An approved grant from the Illinois Department of Commerce and Economic Opportunity fell victim to political squabbling that has held up disbursement of those funds.

“The state money is on hold due to the budget crisis.” said Bus.

Spooner Baumann said they just missed out on an “Impact 100” grant of $100,000. The Suburban Chapter of Impact 100 website states that the intention of the grants is to “have a transformative effect on the receiving organizations.”

“We were awfully close,” he said. “We made great connections and everybody loved us.”

The MFAA also missed out on a Community Block Development Grant (CBDG), which are federal funds administered through Cook County.

Bus said she isn’t giving up.

“We have a couple things that hopefully will come to fruition. There’s still foundations we’re trying to get to and corporations were talking to.”

She said she’s grateful for those who have stepped forward to help, but more is needed.

“We have turned over each rock and stone we could find,” Bus said.

Echoing Lois Baumann’s goal of bringing positive change to Maywood, Bus said the new Stairway of the Stars has benefitted not just its students, but the village itself.

“What we learned from the new building is how it transformed this block in Maywood,” she noted.” And we would like to transform Maywood one block at a time.”

Bus laughed when asked about how an admittedly grassroots organization managed to raise $1.9 million the past seven years, saying, “We don’t know how we did it.” She allowed that the effort requires “hard work on the ground to make it happen.”

No one has worked harder than Lois and Ernie Baumann. On June 10 Lois Baumann, 70, rode 100 miles in the “Le Tour de Shore” cycling fundraiser, which raises as much as $30,000 for the MFAA.

Lois Baumann said that beyond the devastating fire seven years ago, she and her husband have endured many trials in their half century of teaching and celebrating dance.

“There’ve been a lot of obstacles but we’ve always made it work.” she said. She intends to keep going whatever it takes, for as long as it takes.

“I’d walk to California barefoot to keep this program alive.”