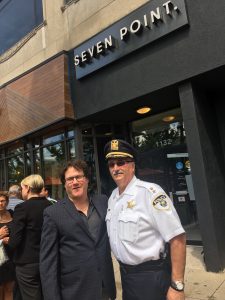 The new business at 1132 Lake Street held open houses over the weekend.

Owner Brad Zerman said the business would register new patients starting Tuesday and medical products would be delivered Thursday. He also said he hoped patients would “switch their dispensary,” since qualified people and their caregivers could only register with one dispensary at a time.

Cannabis products from 10 Illinois cultivation facilities will be on hand, Zerman said. Promotional material for the business said medical cannabis strains will be sold in a variety of delivery forms — other than for smoking — including oils, capsules, edibles and tinctures.

“There are videos to teach them how to inhale,” he said. “About 50 percent of our patients have no [prior] experience with cannabis.”

In June, after a lawsuit by veterans, a Cook County judge ordered the Illinois Dept. of Public Health to add Post Traumatic Stress Disorder to the list of maladies eligible for medical cannabis treatment. Seven other lawsuits are winding their way through Illinois courts with plaintiffs requesting treatment for other medical conditions including autism, chronic post-operative pain, intractable pain, irritable bowel syndrome, migraines, osteoarthritis and polycystic kidney disease.

“We’re optimistic some or all conditions might be added in the next few months,” said Zerman.

Patients can register onsite for a medical cannabis card. Their fingerprints and passport photos can be taken at the Oak Park dispensary.

In July, Gov. Bruce Rauner signed a new law extending the Medical Cannabis pilot program by 2½ years to 2020 and allowing medical pot to be used for PTSD. He also approved a means by which patients with a terminal diagnosis of less than six months to live could get an expedited card within two weeks. The logistics of that program have not yet been worked out by the Illinois Department of Public Health.

Zerman said he worked formerly in the ATM business, specializing in payment processing. An ATM is located right outside the door for the cash-based business.

Illinois medical cannabis purveyors have developed ways to move cash around since the U.S. Controlled Substances Act prevents banks from transferring money from the sale of Schedule 1 drugs. 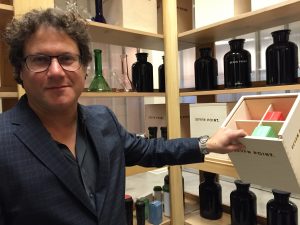 For Seven Point’s daily cash, Zerman has built a series of temporary safes and a vault. Cash will be sent via armored truck to a special bank in Springfield that has agreed to process profits from medical cannabis dispensaries and growers across the state, he said.

Zerman doesn’t know when or if Illinois will legalize recreational cannabis, as other states such as Colorado and Oregon have done. Medical dispensary owners are prohibited by law from opening recreational pot shops. He also doesn’t know what would happen if the federal rules on marijuana were relaxed.

“If cannabis is descheduled, that opens up the door for it to travel across state lines,” Zerman said. “I don’t know if a small dispensary would be able to have a place in the business competing with big pharmacies and companies,” he added.