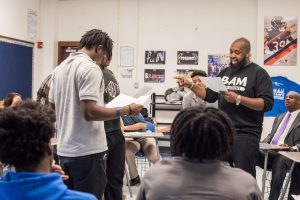 BAM coordinator Anthony Campbell (right) does a role-playing exercise with Phillips students during a recent Becoming a Man session. Studies have shown a return on investment as high as $30 for every dollar invested in the BAM program from the reduction in crime alone. (Nicole Wong/Youth Guidance)

Winning the state Class 5A football championship wasn’t the best thing for them academically, a couple of Phillips High School players confided to peers.

Sitting in a check-in circle as they do at the start of every meeting, members of the Becoming a Man mentoring program at Phillips listened to each other and raised their hands if they were going through the same thing or felt the same way.

“I’ve been out of school lately. When football ended it was hard to focus, hard to continue in school,” said Sherm (not his real name to protect his identity), a student at the high school on Chicago’s South Side. “I was getting low grades. I said something’s got to change. I’m getting along in classes now.”

A few hands went up as Sherm was talking.

In their check-in circle, each BAM participant goes through where he is at physically, intellectually, emotionally and spiritually. It is an opportunity for each of them to share with the group what is happening in their life and the opportunity for group members to see that they are often not the only one to be going through something or feeling a certain way,

Youth Guidance’s Becoming a Man is a group counseling and mentoring program for males in grades 7-12. BAM offers in-school programming for students to develop social and cognitive skills.

Two controlled trials by the University of Chicago Crime Lab showed that BAM: 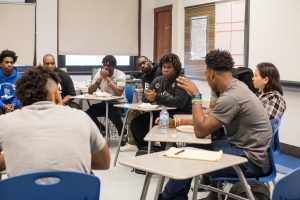 BAM participants, counselor and staff go around the check-in circle at Phillips High School in Chicago during a recent Becoming a Man meeting. “They give me a sense of balance. They help me be a leader,” one Phillips student said of the Becoming a Man sessions. (Nicole Wong/Youth Guidance)

Jamal (not his real name to protect his identity), another Phillips football player, said the BAM sessions help keep him grounded.

In 2001, the Becoming a Man program was launched to help young men navigate circumstances that threaten their future. Program founder Anthony Ramirez-Divittorio, who is still with the Youth Guidance agency, started by creating a safe space for young men at Clemente High School to openly express themselves, receive support and develop the social and emotional skills necessary to succeed.

Now in its 16th year, the BAM program is expected to serve 4,080 youth in more than 60 schools this academic year.

Anthony Campbell, BAM coordinator at Phillips, said he saw a difference in students after the school’s second state championship in three years. 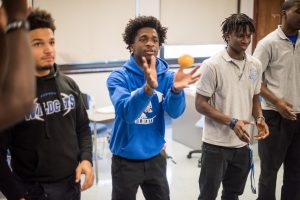 Members of the Phillips Becoming a Man group play a juggling game at the end of a session. The Becoming a Man program helps male students with accountability, integrity and other values. (Nicole Wong/Youth Guidance)

“I saw a change. There was a little ego when they got they championship,” Campbell said.

Like Sherm, other students also struggled when the limelight from the state title faded away, according to Campbell.

“When they’re not in football, it is a little harder to focus their attention,” Campbell said.

Also like Sherm, the players who were struggling have turned things around themselves through their own accountability steps.

“I do see growth when there is an investment made in them” Campbell said.

A role-playing exercise during a recent Phillips BAM session had Campbell playing a student who borrowed $10 from a friend and then kept having excuses on why he couldn’t pay the money back.

Words like “integrity” and “accountability” were shared by members of the BAM circle after the skit was completed.

“It’s the principle of the thing,” Jamal said, giving his input after the role-playing. “If someone knows he is not going to pay it back, be honest about it.”

Jason (not his real name to protect his identity) said he enjoys his time in the Phillips BAM circles because he gets a different perspective on things from his peers and the role-playing. He also enjoys the support that comes from the group.

“You can talk about things and get support, no matter what,” Jason said. “Whatever you are feeling, you can bring it to the table.”