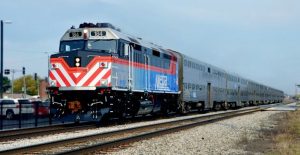 Rail commuters can expect to be approached at some of the region’s largest depots.

It’s neither politicians stumping for votes (at least not yet) nor marketers handing out the latest food products, It’s Metra personnel.

Employees of the transit agency will be periodically checking at platforms to ensure commuters have a ticket in hand or on their phone before boarding a train. It is Metra’s latest effort to make sure that people are paying for the rides they take.

Metra officials say they have no estimate as to how much money they are leaving on the table with commuters’ tickets not being checked or punched. However, with lagging tax revenue and lower ridership revenue than budgeted, the agency said it is trying to gain every dollar it can.

To that end, Metra officials are also looking at different fare-paying equipment to ensure that riders are paying their fair share (i.e. not using Zone C tickets while riding to Zone F).

“There’s no magic bullet or we would do it,” said Jeff Brantz, manager of service design for Metra.

Options being considered by Metra are installing ticket vending machines at stations; tap-in, tap-out systems (where passengers tap a card reader before and after riding a train); and gated turnstiles.

Brantz said that especially with a tap-in, tap-out system, it would be vital that the Chicago Transit Authority and Pace bus service convert to the same equipment to make it easier for commuters to go between the three transit systems.

Brantz and David Rubino, Metra’s director of station services, have been visiting different transit agencies on the East and West coasts to see what a good fit for the Chicago area rail service might be.

Other transit agencies that have put ticket-monitoring systems in place have also stiffened penalties for violators, Brantz pointed out. He said citizens who are passengers without a ticket run the risk of citations from $20 to $500 in some parts of the country.

Regardless of what ticket-monitoring system, if any, Metra goes to, there will be still be a verification step required after a person boards a train, Rubino said.

“We still need to have an audit process on the train,” he said.

Rubino said right now he, Brantz and other Metra officials are working to determine the cost-benefit of a ticket-verification system.

Brantz said it is likely that Metra soon will be seeking proposals from vendors to put ticket vending machines in stations.

He said to have electronic on-board ticket purchasing or verification, Metra conductors need to have internet connections. Brantz said Metra conductors, like restaurants, must be able to process credit-card payments quickly.

There is one big different between the two retailers though, Brantz noted.

“Restaurants don’t move around,” he said.

If Metra goes to a ticket-verification system, it must be quick, Brantz said.

“It has to be done in seconds,” he said.

He added that any verification system at stations also must work quickly with some trains carrying as many as 1,500 passengers.

Brantz said Metra officials will go in depth to ensure any system is cost-effective for the agency.

“We are not going to put a $350 million system in place to collect $2 million. That would not be responsible,” Brantz said.

He said gates and turnstiles would be extremely difficult to implement at Union Station.

“Union, by itself, would present some major challenges,” Brantz said.

Larry Falbe, who represents Lake County on the Metra Citizens Advisory Board, said that he would not support a gate/turnstile system.

“I am not in favor of that. The lines are long enough already,” Falbe said.