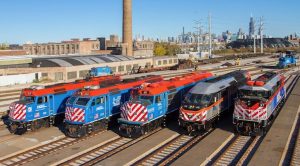 Metra will be creating short “How to Metra” videos, showing people how to read a train schedule, buy tickets and other steps in the rail-commuting process. (Metrarail.com photo)

Metra wants to get its story out to customers and potential customers.

The railroad company serving Chicago and its suburbs plans to ramp up its public relations efforts in coming months.

“We’ve got to be more dynamic,” Metra Director Rodney Craig said when the rail agency’s 2020 marketing campaign was being discussed at the Feb. 19 Board of Directors meeting. “We have a story to tell and we need to tell the story. People need to know that they are going to get there safely.”

“I question if we celebrate our successes,” Director John Plante wondered.

Metra Board Chairman Norm Carlson said the rail agency doesn’t toot its own horn enough about its on-time performance and its efficiency compared to comparable metropolitan transit agencies.

“Not only do we run the trains on time better than anybody else, but we run them efficiently,” he said.

Carlson said Metra had taken some critical fire in the past for being heavy on administration, but that is no longer the case.

“We have had effective cost-cutting,” the board chairman said. “… We do more with less.”

Robert Griggs of the rail agency’s marketing department said Metra will have a more customer-focused marketing campaign in 2020, showing that the agency respects that other commuter options are out there.

He said the agency will specifically market to individual events, such as the Black Women’s Expo in April at Chicago’s McCormick Place, expected to draw 15,000 to 17,000 people per day, as well as sending out broader messages, such as Metra being an environmentally friendly commute option.

“We are the greatest green initiative Chicago and the western suburbs has,” said Director Stephen Palmer, who represents the West Suburbs on the board.

Director Plante said that the agency needs to target people heading to special events, letting them know riding Metra is not a complicated and confusing process.

“We need to get the special events riders to say ‘Oh, I can handle this,’” Plante said.

Palmer said steps need to be provided for riders, such as letting them know where to go after the Metra ride in order to get to a Bears game.

“People need to know the next step, what to do,”’ he said.

Carlson agreed, saying some steps in the Metra process can be contrary to logic, such as entering an office building in some cases to get to the train line.

“We have to get at what in a person’s mind is barring them from using our service,” he said.

To that end, Griggs said, the agency will be creating short “How to Metra” videos, showing people how to read a train schedule, buy tickets and other steps in the rail-commuting process.

Griggs said that Metra is even looking at merchandising items to increase its name recognition with potential customers.

Plante suggested marketing the “big train” to parents as a thing to do with kids on the weekend.

“They need to know that they can get there on the train,” Plante said.

Director Don DeGraf said that Metra needs to do a better job of creating excitement about its services and where it can get people.

“Every advertiser knows that you don’t sell the steak, you sell the sizzle,” DeGraf said.

Griggs said the agency is considering a coupon deal with Uber that would be available for people departing from or going to Metra stations. He said it would be an effort to help people get to their destination more easily after a train ride.

Board Chairman Carlson suggested providing Metra information to municipalities in the area.

“Community and county newsletters are always looking for content,” he said.