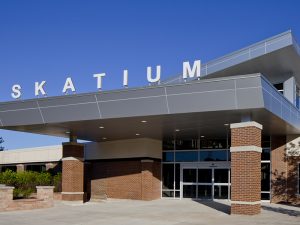 The Skatium Ice Arena in Skokie has been awarded a $2.5 million dollar state grant for various improvements. (Photo courtesy of Skokie Park District)

More than $24.9 million in state grant funding has been approved for local governments to construct, renovate, and improve buildings or purchase land to be used for public access and recreation.

The funding is made available through the Park and Recreational Facility Construction Act (PARC) grant program, part of the governor’s Rebuild Illinois capital program.

The PARC grant program is administered by the Illinois Department of Natural Resources (IDNR).

“We are encouraging Illinois residents and visitors to our state to explore more of Illinois and improving and enhancing recreation opportunities in local parks is a real plus for local communities, their citizens and visitors to those communities throughout the state,” said IDNR Director Colleen Callahan.

The PARC grant program provides up to 90 percent of project costs to help build, renovate and improve recreational buildings used by the public or purchase land to be used for public access and recreational purposes, with local governments matching the value of the grants awarded.

The PARC grant recipients and information on the projects are listed below:

Alsip Park District, $2.5 million:  A development project to expand the existing facility to include an indoor walking track, an additional multi-purpose gymnasium, an expanded fitness center, an indoor playground, additional program spaces including senior/teen areas, and seating in the existing gymnasium.

Chicago Park District – Calumet Park, $750,000:  A development project to restore interior finishes through the first floor of the park’s recreation facility including plaster, painting, other finishes on the walls, ceiling, doors, and windows. ADA upgrades in the restrooms, shower rooms and locker rooms including plumbing, fixtures, partitions, and lockers.

Chicago Park District – Cornell Square Park, $1 million:  A development project to restore exterior concrete, restoration or replacement of windows and doors, and ADA upgrades in the restrooms and locker rooms including plumbing, fixtures, partitions, and lockers.

Chicago Park District – Marquette Park, $750,000:  A development project to reconfigure the auditorium and stage to improve accessibility for all patrons. The auditorium improvements also include upgrades to the stage, lighting, ceiling, fixtures, and access to the stage.

The Chicago Park District has the largest swim clubs in the country and hosts various swimming and water polo events.

Improvements will include the demolition of concession spaces; reconstructing space for an indoor recreation wellness studio for small and large classes for yoga, pilates, cultural arts, and other related classes; and, updating site utilities including the heating and cooling system. Sidewalks, ramps, and curbs to the shelter and aquatic area will also be improved to ADA standards.

The project includes an elevator and a secondary entrance. Ice-skating support spaces will be renovated, and a new multi-purpose room, restrooms and storage are included. New dasher boards will be installed at both skating rinks.