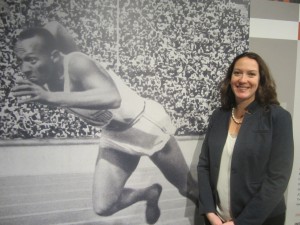 Illinois Holocaust Museum curator Arielle Weininger with a photo of Jesse Owens at the entrance of the Berlin Olympics exhibit.

Two Chicago-area museums are cooperating to stoke interest in the landmark 1936 Berlin Olympics on its 80th anniversary.

A Washington, D.C.-originated exhibit on the Olympics just opened for a run throughout the spring and summer at the Illinois Holocaust Museum and Education Center in Skokie. The display drew more than 400, a record for an opening of an exhibit, on Feb. 21.

Meanwhile, a documentary featuring actor Blair Underwood as executive producer and narrator had its rough-cut screenings last week at both the Holocaust Museum and DuSable Museum of African-American history. The film “Olympic Pride, American Prejudice,” focusing on the 18 black athletes on the 1936 U.S. Olympic team, played to three consecutive full houses at DuSable’s auditorium near Washington Park on the South Side, then sold out at the Holocaust Museum on Sunday, Feb. 28.

The sharing of resources and exhibit material was a product of good timing in an Olympic year for the pair of museums in different geographic and cultural regions. They also touch on themes that still resonate after all these decades.

Intertwined were a strong attempt at a U.S. boycott of the ’36 Games due to the Nazis’ escalating war against Jews, the African-American athletes’ desire to prove they could compete on an even international playing field after enduring virulent discrimination at home, and the Germans’ craven desire to paint a sanitized picture of their society to a skeptical world.

A smart decision was augmented by good fortune after Wilmette native Arielle Weininger, chief curator of collections and exhibitions at the Skokie museum, had booked the Berlin Olympics exhibit four years ago from its originating base at the U.S. Holocaust Museum in Washington, D.C.

The 20-year-old exhibit, featuring an old-fashioned collection of artifacts with some film instead of the modern trend of interactive displays, had played to big crowds at the downtown Spertus College in the late 1990s. Weininger had worked at Spertus at the time in its education department. 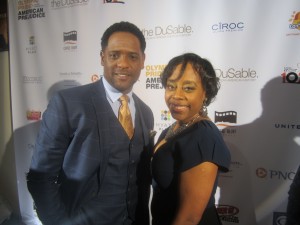 “I knew intimately how excellent this exhibit was and how people are drawn to it,” she said. “I knew we would be heading into an Olympic year in 2016. We have 60,000 children coming through annually. Every child remembers the first Olympics they were aware of. My cousins and I used to do handstands in Lake Michigan – we were all Nadia Comaneci.”

The exhibit paints a complete picture of the anti-Jewish legislation and boycotts against Jews from the moment Adolf Hitler came to power in 1933. Recognizing this mounting horror, thousands of Great Depression-wracked Americans strongly advocated a boycott of the Summer Games, a controversy that came to a head with narrow approval of the U.S. trip at the end of 1935. The displays show the depth of opposition and continued mockery of Hitler and the Nazis by U.S. editorial cartoonists during the Olympics.

What Weininger did not figure when she got the commitment to the exhibit were two films with Olympic themes coming out at the same time.

“Race” is a Hollywood feature film focusing on four-time gold-medal winner Jesse Owens. However, writer-director Deborah Riley Draper and others discovered Owens was joined by 17 other black athletes, including two women, on one of the first truly integrated sports associations or cultural institutions in U.S. history. Owens’ almost other-worldly track feats obscured the achievements of others. When Underwood heard of the project, he jumped aboard.

Despite the dramatic, appealing storyline, Hollywood took 80 years to make a feature film. The politics and economics of the business has been a factor, said Underwood, who first gained fame on “LA Law” in the late 1980s.

“That’s why this film had to be made, even though it’s a documentary,” said Underwood. “It’s so difficult to tell any period piece, No. 1. The expense, you’re dealing with the racial elements, it’s challenging to get financing dealing with period elements. You put the two together, it’s even more challenging.

“There are thousands of stories like this one. Not just Jesse, but the other 17 (athletes, including future Chicago congressman Ralph Metcalfe). It takes time. Better late than never.”

Hollywood moguls base decisions on “what can be sold in the marketplace,” Underwood added. “What do people want to see? What are they ready to see? It takes somebody to have the guts and the will to write a check to make it happen.”

The near 90-minute rough cut will be trimmed to under an hour for eventual video exposure on cable or a Netflix-type distribution, said Draper. The preliminary version drew huge cheers from the DuSable audience at the ancient black-and-white film feats of the ’36 Olympians. Their audio memories, interviews with family members and commentary from more recent Olympic stars led by Carl Lewis dramatically added to the time tripping.

All the subsequent achievements of black athletes, including Jackie Robinson, must be credited to the Berlin Olympians opening the door, said filmgoer Richard Dent, an NFL Hall of Famer and the Super Bowl XX most valuable player.

“We will forever be in his debt to honor them,” Dent said. “What sports does when it comes down to racial lines is reality, where people appreciate one another. When people compete, it’s not about a race. It’s about how people enjoy each other. That’s the appreciation of an athlete to an athlete.”