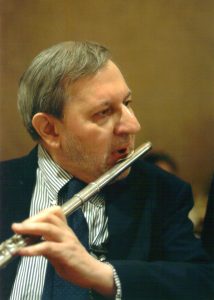 Richard C. Wyszynski (Feb. 15, 1933 – March 4, 2020) Wyszynski, a Quixotic figure in and out of Chicago’s orchestral music scene, lived by e.e. cummings’ principle: “An intelligent person fights for lost causes, realizing that others are merely effects.”

A musician who became known as a champion of Chicago orchestral music, and one of its most incisive critics, has died. Richard Chester Wyszynski was 87.

Wyszynski was something of a renaissance man, whose name made Chicago news numerous times. The same man who blew the whistle on poisonous fog used in theatrical productions was also the founder of a whimsical fantasy football league that captured the imagination of philosophical sports fans.

He was a virtuoso flutist who honed his craft under the tutelage of the legendary Marcel Moyse. He was also a conductor, composer and educator who made it his life’s work to bring classical music to broad audiences. He died in Chicago on March 4 after 18 months of ill health.

He developed music criticism skills in Los Angeles under a Rockefeller Foundation grant in the 1960s. He subsequently became the music critic for Chicago’s “Old Town Voice.”

The Chicago native was also published in national periodicals, and lectured at Northwestern, DePaul, and Loyola universities, Oakton Community and North Park colleges and the Newberry Library.

A substantial collection of work by and about Wyszynski is available for perusal in the archives of the Harold Washington Library Center, 400 S. State St., Chicago.

Wyszynski founded and conducted Chicago’s Cardinal Chamber Orchestra, beginning in the 1950s. He hosted a radio broadcast at the University of Chicago and appeared on the old WNIB classical radio station, with Studs Terkel on WFMT, and on National Public Radio.

In 1977, Wyszynski made a name for himself in Chicago theater when, as a pit musician, he blew the whistle on the carcinogenic “fog juice” used during the crucifixion scene of “Jesus Christ, Superstar,” leading to the Chicago Fire Department shutting down the show. He claimed he was blacklisted ever since, but quipped to Lerner Newspapers columnist Pat Butler, “I’d rather be blackballed than black-lunged.”

Prior to “Superstar,” Wyszynski was flutist for the touring companies of “Camelot” and “Man of La Mancha,” where he was also assistant conductor.

He ran a one-man campaign against the use of classical music in commercials, and was a prolific letter-to-the-editor writer, usually on behalf of the impoverished and downtrodden, and often under assumed names like “Fred Naracott,” a character he acted in an Agatha Christie play.  He made it his mission to provide advice to his friends, solicited or not, through long typewritten letters accompanied by photocopies of comic strips or articles on homeopathy or politics.

An eclectic man, he was featured on the cover of the Chicago Reader in 1979 as the “founder, proprietor and reigning wizard of this football fantasyland,” as the Reader described his miniature football league, in which the action was driven by dice throws. Psychokinesis was the only possible explanation for the consistent individual performance of each player in the Consolidated Athletic Commission, Wyszynski said.

“Sportrecord,” his hefty, meticulous volume about each season and the performance of the players, found its way to J.B. Rhine’s Foundation for the Research of the Nature of Man, a now-defunct parapsychology institute at Duke University.

For Wyszynski, play was a necessity “to isolate yourself from the make-believe world of fiscality into the real world of fantasy.”

He was born in 1933 and raised in a five-flat owned by his parents in Chicago’s Ukrainian Village neighborhood. His mother, Victoria Gerlich, was a seamstress and his father, John Wyszynski, was a World War I veteran who worked in newspaper printing plants.

Wyszynski, who lived most of his life in the building, decried the speculative market that was driving out longtime residents.

“To gentrifiers, home-owning means as much as a Monopoly game. And poor people wind up in Free Parking, jail or a cemetery, thanks to the American spirit of  ‘competition.’”

Wyszynski’s mission in his later years was championing “unsung” composers, to use former Chicago Tribune critic John von Rhein’s word from an article about a 2007 concert Wyszynski staged.

In the 1990s through the early 2000s, he resurrected his Cardinal Chamber Orchestra, staffed with union musicians from the Lyric Opera and the Chicago Symphony Orchestra. He staged Trust Fund concerts at the Harold Washington Library featuring the music of great but lesser-known American composers Alan Hovhaness and Alec Wilder, and noted DePaul composer Robert Muczynski.

He was boyhood friends with Muczynski, the noted composer who was his contemporary and fellow West Town resident. Muczynski dedicated the publication of his Fantasy Trio for cello, clarinet, and piano to Wyszynski.

But it was flute performance that was Wyszynski’s passion. He picked up the instrument after older sister Eleanor dropped it to become a singer. He became first a pupil of former Chicago Symphony Orchestra flutist Arthur Kitti, then Moyse.

He is a graduate of De La Salle High School, where he credited conductor Russell Harvey as a formative influence. As a teenager, Wyszynski won Chicago medals for his flute playing, and performed in Orchestra Hall at the age of 13.

Wyszynski was principal flute in the 1960s for the Shreveport and North Carolina Symphonies. He spent four grueling years in Brattleboro, Vermont studying under Moyse, who told him, “I will be good ‘docteur’ for you.”

Richard was on the Studs Terkel show twice, to talk about Moyse and Stassevich.

In an interview with Terkel, Wyszynski described the loneliness of playing “The Last Rose of Summer” in the seedy Snow White Motel in the midst of a nighttime snowfall. Moyse taught him that even the simplest melody must be played with great sensitivity.

Indeed, Wyszynski would often say that “all classical music, when you boil right down to it, is nothing other than love. It is either celebrating the presence of love or decrying the absence of love.”

In more recent years, he made classical music accessible through unique lectures at Oakton Community College and offbeat venues like “Singleforum.” He cued up vinyl records from his vast collection on a heavy portable record player, and played old cassette tapes, interspersed with quotations from poets and visionaries, to put people new to classical music at ease.

Wyszynski would speak of composer Ralph Vaughan Williams’ concept of  exploring the connection between art and social justice, and his idea of reaching out to the “ultimate realities” of the spiritual world. His other spiritual touchstones were Pierre Teilhard de Chardin, e.e. cummings and Buckminster Fuller.

“There will always be that longing to be ‘on the trail’ of the ultimate,” he wrote of orchestral playing. “But of course the essence of our sounds do not originate in our instruments; they are germinal in the players. And they work to come out, one way or another. Because they are love. And with or without instruments, we recognize each other. And we touch each other, and we generate the inaudible music to and with each other. We become each other’s instruments. We enhance, and perfect, each other.”

Wyszynski never married and leaves no immediate survivors. His parents and half-sister Eleanor (Chester) Balaam of Michigan preceded him in death. A public memorial is being planned.