Blue sky weather prevailed on Father’s Day for the Chicago Musician March for Equality and Change in Chicago on June 21.

While Sunday late morning temperatures were in the upper 70s, full sun was a factor for those choosing to march from Lincoln Park to Wicker Park.

The marching route was nearly three miles and organizers reminded protesters to cross their arms over the top front of their heads as a signal to others if they needed immediate medical care in the heat. 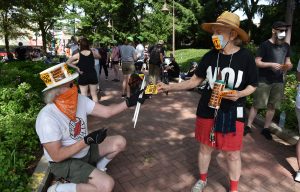 The event began closer to 11 a.m. at Julia Porter Park, 2400 Halsted St. with speeches, rap and guitar music. After the program concluded, the march destination was at the six corner intersection of Damen Avenue in Wicker Park.

Chicago musicians, industry workers and friends of the Chicago music community gathered to share messages of racial inequities they’ve experienced trying to make a living in the local entertainment scene.

Musicians were encouraged to bring acoustic and percussive instruments, “as we amplify our voices together in harmony to create and promote lasting impactful change for a better future for all,” according to the event’s social media post.

George Floyd, who died last month while a Minneapolis police officer kept his knee on Floyd’s neck, was on people’s minds.

“Unfortunately, it took George Floyd’s life to mobilize the nation and people are just fed up,” said Roman Zabicki of Chicago, a percussionist and protester who brought his drum.

One person who held a megaphone to help direct marching chants declined to be named, but did offer a comment. 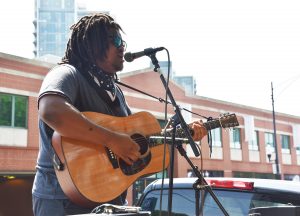 Singer performs during the Chicago Musicians March for Equality and Change in Chicago on June 21. (Photo by Karie Angell Luc/for Chronicle Media)

Are things getting better with the conversation for equality?

“I don’t necessarily think so, not yet,” she said.

“But we’re just not going to go home until it does, by voice or by fire.”

While organizers spoke about defunding police departments, the message was also about #BlackLivesMatter with the persistent demand for justice for victims of police brutality.

As people chanted, percussionists drummed to the beat. One musician carried a metal washing board, which had a cymbal. 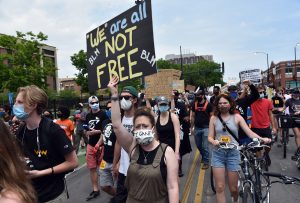 One unnamed marcher, who was among the last in the group, said she felt things were getting better for social justice, but that people need to show up.

“If every single person in this march thought that it was OK that they just stayed home today and that other people were going to be out here, we would have nobody out here,” she said.