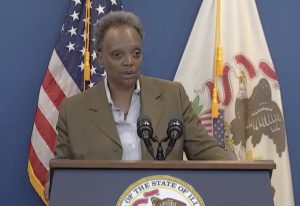 Chicago Mayor Lori Lightfoot speaks at a news conference Wednesday, Sept. 14 in Chicago in which she and Gov. J.B. Pritzker gave an update on more than 500 migrants that have been bused to the city by the state of Texas in the past two weeks. (Blueroomstream.com)

SPRINGFIELD – Gov. J.B. Pritzker said Wednesday, Sept. 14 that Illinois will continue to welcome migrants bused here from Texas as he blasted that state’s governor for relocating them to other cities without sharing information or providing resources.

Pritzker said Texas Gov. Greg Abbott and his agencies have been providing little notice for incoming migrants and has not responded to calls from Illinois’ agency heads. That’s meant Illinois has had “between three and 24 hours to find shelter for potentially 100 or more people.”

He said that has led to “a needlessly last-minute and complex process that is a heartless display of politics over people.”

Pritzker will deploy 75 National Guard members to aid with logistics and will issue a disaster proclamation aimed at expediting the flow of resources. The proclamation enables the Illinois Emergency Management Agency and other state agencies to work with local governments to help migrants access transportation, emergency shelter, food, health screenings, medical assessments, treatments and other care.

Pritzker said the migrants are residing in the U.S. legally through the asylum-seeking process. They’re often fleeing dangerous situations, mostly from Central and South America, and they receive facial and fingerprint scans at the U.S. border that are “cross-checked against terrorist watch lists and criminal databases.”

“They have traveled for months, most often without enough food or medicine or support,” he said. “Many have literally walked from Venezuela to the U.S. border, seeking safety for themselves and for their families. These are people who have not been accused of doing anything wrong.”

Illinois Department of Human Services Secretary Grace Hou said an 11th bus arrived early Wednesday. It brought the total number of migrants arriving in Illinois over the past two weeks to more than 500. Buses are arriving daily, Pritzker said.

“I have said to our team, we live in a state where our leaders are committed to providing a dignified welcome to our state,” Hou said. “That is not the question. The question is how we do it when the process is intentionally designed to cause confusion and utter chaos.”

“We’ve seen pregnant women literally ready to give birth who have been provided next to no support on the buses. Babies, elders, who continue to be treated in a callous manner until they get to the city of Chicago,” Chicago Mayor Lori Lightfoot said.

Pritzker said the state hears about arrivals only by unofficial means, such as Texas nonprofit organizations whose only information is that “they’ve just literally watched the bus drive by.” He called on Abbott to provide better notice.

Abbott launched the program in April when he issued a memo directing the state’s Department of Emergency Management “to begin coordinating the voluntary transportation” of immigrants who had been released from federal custody.

“President Biden’s inaction at our southern border continues putting the lives of Texans — and Americans – at risk and is overwhelming our communities,” Abbott said in an Aug. 31 statement. “To continue providing much-needed relief to our small, overrun border towns, Chicago will join fellow sanctuary cities Washington, D.C., and New York City as an additional drop-off location.”

Hou said the other cities have warned that “this will not relent.”

Pritzker said once migrants arrive, city and state staff work with state-funded welcoming centers and nonprofits such as Catholic Charities and Salvation Army to “triage and determine their immediate needs, prioritizing infants, children, seniors and families.”

He and local lawmakers characterized the migrant situation as a national problem. Lightfoot said the situation in Chicago is a “manufactured crisis.”

“The normal lines of communication that we have with state leaders, particularly when it comes to issues of emergency management or law enforcement, (Abbott) has shut those off from us. So it is a manufactured crisis by ambush to be very clear,” she said.

Pritzker said Illinois is seeking federal help and his staff has been working with Illinois’ members of Congress and the White House to “make sure that we get the resources that we need,” such as federal appropriations that have been available in other states that have received migrants from Texas.

Lightfoot said resources going to Texas should be cut off and sent to cities welcoming migrants.

Pritzker said he believed the state has available resources in the IDHS budget to deal with the migrants in the near term.

“But absolutely, there is a point at which that we wouldn’t have the resources to continue, and you’ve seen thousands and thousands arriving in New York and in D.C., and it’s an enormous burden on those cities,” he said.

Lightfoot, whose city received most of the migrants, said it will continue to assist them.

“The reality is we have a finite number of resources here in the city of Chicago and the county of Cook,” she said. “And so there will be a need to expand the number of communities across the state that may have to step up.”