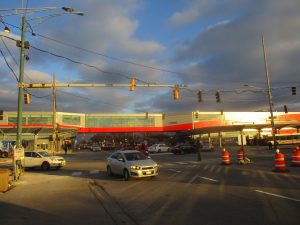 The new 95th/Dan Ryan terminal stretches across the spot where 95th Street passes over the Dan Ryan Expressway. While the south terminal (right) has been open since April 2018, the north terminal (left) opened in the beginning of January. (Photo by Igor Studenkov/for Chronicle Media)

On the Jan. 4, the first Friday of 2019, Chicago Transit Authority officially opened the northern half the new, greatly expanded 95th/Dan Ryan transit terminal.

The facility serves as major transit hub not just for Chicago’s South Side, but some of the nearby suburbs. Passengers can use it to transfer between Red Line ‘L’ trains, CTA and Pace buses and Greyhound and Indian Trails intercity buses. By the early 2000s, it became one of the busiest transit facilities in Chicago, with congestion becoming a growing concern.

With the opening of the northern terminal building, the terminal essentially doubled in size. Instead of having all of the buses pick up and drop off passengers on the north side of 95th Street, the buses are now split between two buildings — one on the north side and one on the south side. An overhead bridge links the two together, and the new real-time arrival information displays allow riders to keep track of all of the buses and trains arriving at the facility. Chicago and CTA officials touted the new facility as an important milestone for the South Side and something that could bring economic opportunities for its residents.

As the name suggests, the 95th/Dan Ryan terminal is located at the spot where the two streets intersect. It was the southern endpoint for what is now known as the Dan Ryan branch of the Red Line. Conversations about extending the line farther south started almost as soon as the branch opened, but the process still hasn’t moved past finalizing the alignment as of the start of 2019. 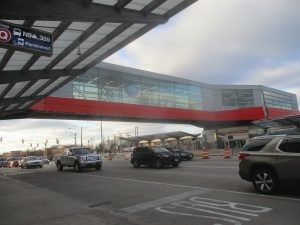 CTA officials previously told the Chronicle that, when the Red Line extension is completed, some of the bus routes that currently serve 95th Street would likely be rerouted to the stations farther down the line. But until that happens, most of the CTA and Pace routes serving the area south of 94th Street feed into the terminal. The terminal currently serves as a stop for 11 CTA routes and three Pace routes. The Red Line and Pace route 352 run 24/7, while the CTA N5 route provides service during the night, so there is usually at least one bus or train arriving or departing the terminal at any given time.

By the mid-2000s, CTA realized that there were several problems with the set-up. The facility was becoming too congested, especially during rush hours. According to the transit agency’s press release, between the ‘L’ and the buses, it handles “more than 20,000” riders a day. Furthermore, because the terminal was located on the north side, riders who didn’t transfer to the buses had to cross congested intersections to get to the other side 95th Street.

The new, expanded station was meant to tackle both problems. Two brand-new buildings were built on both sides of 95th Street, each larger than the original terminal and each with a bus turnaround. Pedestrians could access the ‘L” station no matter what side of the street they’re on, and the overhead bridge meant that they could transfer between two buildings safely.

Under the current configuration, all of the buses that run during the night stop on the north side of the south terminal. The rush hour express buses stop at the north terminal, while the inter-city buses stop at the southwest corner of the southern building. The remaining buses are spread between the two buildings. Both terminals were built with more bus-stop bays than there are bus routes, so CTA and Pace could potentially add as many as six routes without hurting capacity. 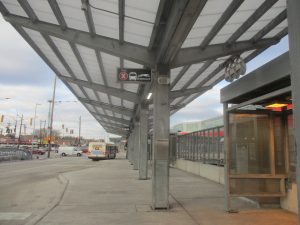 Greyhound buses and other inter-city buses now stop at the southwest corner of the south terminal building. (Photo by Igor Studenkov/for Chronicle Media)

The new terminal has real-time arrival displays and maps. Inside the buildings, the displays show information for all the bus routes at once, and each bus bay shows the information for whichever route is stopping there. The feature comes in handy in corridors served by more than one bus route. For example, riders wishing to travel to the intersection of 95th Street and Western Avenue can either take CTA route 95 or Pace route 381. The arrival displays let the riders know which of those buses would arrive first.

In addition, each of the bus stops comes with a route map and a bus shelter with heat lamps that can be activated during the colder months. The newly opened north building has three retail spaces. The station has more bike racks and more Ventra card vending machines.

The project isn’t quite finished. When the Chronicle visited the terminal on Jan. 9, the north side of the northern building was still closed for construction. And according to the CTA press release, the northern building’s art component hasn’t been installed yet. According to the project website, Chicago artist Theaster Gates is designing a unique music space called An Extended Song Of the People. It will be a space where local DJs will be able to play their music, and residents would be able to “present public projects, live music performances, interviews, conversations, and debate.”

Those performances will be broadcast over the terminal’s PA system. AESOP will also offer workshops “on music, sound, and audio production” and provide a space where nonprofit organizations can record “stories of black and brown people to ensure that historical and present voices are heard.”

CTA doesn’t have the concrete date for when AESOP would launch, stating only that it would be sometime later this year.

During the Jan. 4 grand opening, Mayor Rahm Emanuel described the opening of the north part of the terminal as a major milestone not just for passengers, but for South Side as a whole.

This a critical milestone in the largest construction project in CTA’s history, one that marks a transformative investment in Chicago’s South Side,” he said. “This 95th/Dan Ryan North Terminal and pedestrian bridge add critical components to a transit showcase that continues to create jobs and opportunities, and drives economic development in this community.”

“CTA is proud to have created another architecturally stunning and economically important investment for Chicago’s South Side, while significantly enhancing the transit experience for CTA riders,” he said. “The Red Line and the bus routes served by this transit hub will provide customers with expanded passenger facilities, new amenities, and safer passenger access to buses and trains.”