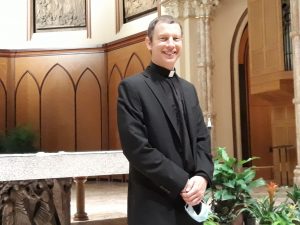 It was a long and winding road that led Patrick Gorman to the priesthood.

During a 10-year discernment, which included teaching kindergartners in Japan and developing software in Alabama, the 42-year-old Park Ridge native continued to feel a pulling to assist others.

“I felt I had to follow a call to serve,” Gorman said from a pew in Chicago’s Holy Name Cathedral.

Gorman is one of seven new Catholic priests who will begin serving parishioners of the Archdiocese of Chicago on Wednesday (July 1).

The newly ordained priests range in age from 27 to 52 and hail from the archdiocese, as well as Columbia, Ecuador, Guam, and the Philippines.

“These unprecedented times challenge us, but also are moments of grace that give us hope as these new priests remind us that good shepherds provide leadership and comfort,” said Cardinal Blase Cupich, archbishop of Chicago. “My prayer of thanksgiving and for these new priests is that through their dedicated ministry as preachers, healers and unifiers, they will generously share the joy of Christ’s gospel and the solace of God’s enduring love in the service of God’s people.” 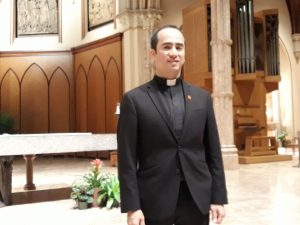 Men become priests in the Catholic faith through the sacrament of Holy Orders, a celebration rich in symbolism and tradition. By ordination, priests receive a variety of responsibilities, particularly celebrating Mass and granting forgiveness of sins through the sacrament of Reconciliation. Priests also preach the gospel, and celebrate the sacraments of Baptism, Matrimony, and Anointing of the Sick. Diocesan priests make promises of lifelong celibacy, prayers for the people of God, and obedience to their bishop at their ordination. It is also expected that priests will lead a life of simplicity consistent with the people they serve.

Each newly ordained priest has completed at least six years of human, spiritual, academic, and pastoral formation, which included study of philosophy, Catholic theology, the history of the Church, and pastoral practice. As part of their seminary education, future priests are assigned to work at parishes, schools, and hospitals as they develop their capacity to be shepherds of God’s people.

“I’ll definitely be expected to be ready from day 1,” Patrick Gorman said of becoming a priest during a time marked by COVID-19 and civil unrest. “… The church needs to serve as a pillar for concerns, standing up for beliefs, for the poor, for victims of racial prejudice.” 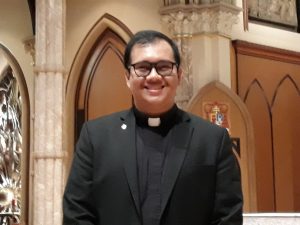 Gorman’s first assignment will be at St. Alphonsus Parish in Chicago.

Martin Marulanda, 34, originally from Columbia, gave himself a year to figure out if Chicago was for him. Seven years later, he is still here and will be having his first assignment at the combined parishes of Our Lady of Tepeyac, Assumption and St. Roman in Chicago.

“The idea was to come for one year to see if I liked the archdiocese (of Chicago) and see if I could learn English well enough to communicate properly,” said Marulanda, who had never been to Chicago before beginning his training here. “It’s been seven years now that I’ve been here in Chicago and I’m getting to know the archdiocese. Every day, I am falling more in love with God and with the archdiocese.”

“I love Chicago. It’s my number one place in the United States,” continued Marulanda, who had been to several U.S. cities previously as a music teacher.

He said in this challenging time, the Church has a chance to reach more people through virtual services than it would normally.

“We have done Masses and devotions online. We can create opportunities to pastor to people in the community who we typically couldn’t reach,” Marulanda said.

Even though 29 years, Arthur Bautista still has his mother checking in on him. On a recent Sunday, Bautista was the cameraman for the virtual Mass at St. Josephat in Chicago, where he has been a deacon for three years.

Later that day, he got a call from his mother.

“She said, ‘I watched Mass. Where were you at?’” Bautista laughed. “I’m a 29-year-old man about to be a priest and I have my mother asking, ‘Where were you?’”

Bautista, originally from the Philippines, will have his first assignment at the combined Sts. Timothy, Henry, and Margaret Mary Parish in Chicago.

He said the Church has a role to play in addressing the civil unrest in our country.

“I am a person of color. I think local parishes need to have those difficult conversations about race,” Bautista said. “There are victims of racial prejudice, whether they are Filipino or African American. The role of the Church is to spread the message that everyone is good. We shouldn’t be looking at the color of a person’s skin. We should take away from any conversation that we are all from God and we are all created in the likeness of God.”

“Although the start of their priestly ministry is not as they may have imagined, these new priests will be warmly greeted by parishioners hungering to be fed spiritually,” said the Very Rev. John Kartje, rector/president of USML/Mundelein Seminary. “I am eager to watch them accompanying their people as spiritual guides and shepherds who know their flocks well and will draw their communities close to the Lord.”

The Archdiocese of Chicago, the third largest Catholic archdiocese in the United States, serves more than 2.2 million Catholics in 316 parishes in Cook and Lake counties, a geographic area of 1,411 square miles.