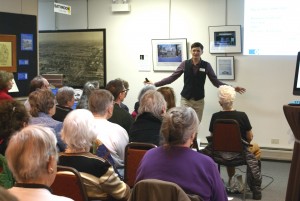 During the Coffee Talk, Philip Mohr, Des Plaines History Center curator, used computer-generated map technology to zoom in on aerial views of attendees’ houses, and then pinpointed various aspects of the architecture, linking a pointed arch in the upstairs window of one home to a Greek revival style of architecture.

In putting together the Des Plaines History Center’s latest exhibit: “Des Plaines Architecture: An Exhibit about our Homes and City,” curator Philip Mohr wanted to create more than merely a time capsule of old buildings and homes in the community.

He wanted to dig deeper, aiming to show history buffs and curious residents alike how, and why, certain structures came to be — not just when. He wanted to paint a picture of the landscape, from the first log cabin built in 1841 to a population growth, spurned by railroad access, which led to Des Plaines being incorporated as a city in 1869. He wanted to detail how early European settlers brought with them elements of architecture dating to Greek, Italian and Victorian Era styles.

Mohr wanted to provide exhibit-goers with, “a sense of place,” as he informed a packed house during a special Coffee Talk presentation, “Identifying Your House,” held Feb. 18 to kick-start the exhibit, which runs through December at the History Center, located at 781 Pearson Street near the heart of downtown Des Plaines.

“A lot of people ask about different buildings in town, so I thought, ‘Why not have an entire year about architecture?’” Mohr said. “So we decided to do this exhibit to provide a broad view of what architecture was. Things come and go, but there’s always something to why it was … always a reason behind the way something looks. We see these buildings all the time, so we wanted to point out the landscape, and take time to appreciate the historic architecture as well as the newer, and draw the connections.

“You live in something, and you’ve developed a sense of place based on that. So I think people will have a more fulfilling sense of place if they take time to learn about the environment around them. As a consideration of place, it’s important to ask, ‘Are we creating something people can appreciate in their memories?’”

One place of significant architectural distinction in Des Plaines is the Historic Methodist Camp Ground, located at 1900 E. Algonquin Road, just east of River Road. Founded in 1860, and placed on the National Register of Historic Places in 2005, the site was developed as a summer camp in order to attract large amounts of people for religious
services, often consisting of week-long meetings which previously had been held in temporary tent cities during the mid-19th Century.

Over time, the camp grew to include permanent structures, including tabernacles for services, a hotel and more than 100 cottages for residential purposes. The History Museum’s exhibit includes a series of photographs taken at the Camp Ground by Stan Kotecki, including the Waldorf Tabernacle, constructed in 1903 and known for its steel
trusses arranged in a circle.

“The Camp Ground was definitely a gathering place for devout Methodists,” Mohr said. “You would have thousands of people there at any time in the summer. And it had boardwalk streets — wooden planks — connecting the houses. The cottages are very small — miniature versions of what you’d see in the surrounding landscape.”

During the Coffee Talk, Mohr used computer-generated map technology to zoom in on aerial views of attendees’ houses, and then pinpointed various aspects of the architecture, linking a pointed arch in the upstairs window of one home to a Greek revival style of architecture. In another case, he showed how a house’s construction mimicked the Italianate Period (roughly 1850-80), which took its cue from the Italian Renaissance in the 15th Century.

Mohr’s presentation detailed the history of Des Plaines’ architecture through the 1920s, explaining how the rise of the automobile industry resulted in garages being constructed in homes, and into post-World War II designs, which reflected the growth of the middle class in the area.

Des Plaines resident Kathy Vana — a volunteer at the History Center — has lived in a ranch-style house, built in 1917, for the last 43 years. She said the historical aspect of the property was something that appealed to her from the start, and that she has enjoyed some of the surprises the house revealed over time.

“We looked at a lot of homes, but they were cookie-cutter,” Vana said. “We liked this one because it’s unique, and it has a lot of character. Then you start fooling around in the house, and you find things. The basement has a little wooden door, leading to what was a coal bin, and there were old bookcases, behind some old wallpaper, from when it was a farmhouse. There are so many interesting things. I’ve been doing some research, trying to find out who owned the land and built the building … trying to find old photos.

“It’s been a lot fun. I just love history, and it makes you wonder who lived here and what their lives were like … what the families were like. If walls could talk.”

Besides photographs, the exhibit features artistic displays of old blueprints, and copies of original land plats and old maps. Various books on the subject, available at the Des Plaines Public Library, are featured as well. As the year progresses, different themes will be represented, including the 125th anniversary of the Des Plaines Fire Department.

“I think this type of exhibit speaks to a lot of people,” said Des Plaines History Center Director Sharie Caine. “Not only those with a long history here, but new homeowners who want to know the history of their house. And we have the resources to help them out. The average resident can come in and gain that knowledge. You see patterns, over time, and all the components come together to tell a story.

“It’s important to remember, to reflect, because each community is part of the bigger picture of the history of the United States. For us, it’s a matter of finding ways to make the past relevant to the younger generation … to make it more interesting to learn more about their communities.”

To discover a sense of place.

“Des Plaines Architecture: An Exhibit about our Homes and City” is on display from 10 a.m. to 5 p.m. Tuesday through Friday, and from 1-4 p.m. on Sundays. For more information, including how to become a History Center member, call (847) 391-5399 or visit www.desplaineshistory.org.