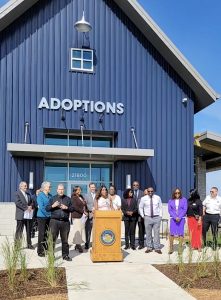 Cook County Board President Toni Preckwinkle, Matteson President Sheila Chalmers-Currin, Cook County Commissioner Donna Miller (6th District) along with representatives from South Suburban Humane Society (SSHS) and other elected officials attended a ‘dog treat breaking’ ceremony on June 9 to celebrate the opening of SSHS’s new facility. Pieces of the treat were given to pups looking for their forever homes.

The county’s Department of Animal and Rabies Control awarded SSHS $7 million as part of Housing Cook County’s Animals grant program that assists with costs associated with the planning and construction of the new facility. SSHS broke ground in October 2020. The facility will officially open to the public this weekend.

“To see this idea come to fruition is incredible,” said Preckwinkle. “The County’s contribution to help build this new facility ensures animals found in the Southland continue to have a safe and comfortable environment while waiting to find their forever family. The County is grateful for our longstanding partnership with SSHS, whose new facility will help County pets and residents for decades to come.

The new 19,000-square-foot shelter in Matteson is the largest animal shelter in the Southland and has the capacity to house 60 dogs and 75 cats. The space features an expansive outdoor area complete with a pond, a “catio” (enclosed outdoor patio for cats) and offers a veterinary clinic where low-cost services are available for County pets.

“The Humane Society continues to be our nation’s most effective animal protection organization. The Society’s role in caring for the welfare of animals is second to none and adds to the greatness of our nation,” said President Sheila Chalmers-Currin. “We are honored for the association and that Matteson is the new home for the ultimate protector of animals.”

Approximately 3,500 animals are cared for each year by SSHS. The new facility will give even more pets a chance for a new start. SSHS says several south suburban locations were explored and Matteson was chosen for the vast natural landscape and ability for volunteers and pets to walk and explore.

“The Central Avenue land is our dream come to true,” said South Suburban Humane Society CEO Emily Klehm. “It is easily accessible from I-57 and Lincoln Highway. People can relax with a dog while volunteering their time and our cats will gaze at this gorgeous scene from the planned catio windows.”

Housing Cook County’s Animals grant program was funded by residents who paid a small fee to have their dog or cat vaccinated against rabies through the County. This award funded 80% of the project and the remaining amount was funded through their capital campaign, “A New Home for SSHS.”

“I’m thrilled that South Suburban Humane Society’s state-of-the-art facility is located in the 6thDistrict,” said Commissioner Miller. “Because of Emily’s visionary leadership, this new facility has become a reality. I am proud to support this amazing effort that will help the residents and pets of the Southland through a $7 million grant from the County.”