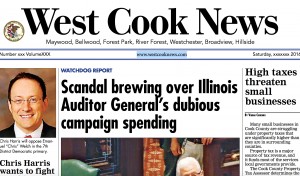 These are not just election mailers, their financier says, they are bona fide local papers that will continue after the elections.

“Our intention is to keep the papers rolling and to build more,” Proft said.

The papers are delivered through the mail to registered voters, and are “dropped off in different locations, like grocery stores and libraries,” Proft said.

Liberty Principles Super PAC declared $85,000 in donations to Newsinator, LLC, a company also owned by Timpone. According to the Illinois State Board of Elections, the donation supports six candidates in the March 15 primary, all Republicans except Harris.

Super PAC rules prohibit direct donations to candidates, but PACs can buy advertising or services that support or oppose candidates.

As for candidate Harris, he said he found the new paper “Quite well-done and very informative.”

“There’s absolutely a need for a news source here,” Harris added. “People are starved for information since the Proviso Herald went away.”

Welch said in an email he had heard about the newspapers.

“Similar attacks … have been sent by Liberty Principles PAC in other areas,” Welch said. “The support Chris Harris is receiving from right-wing supporters of Gov. Bruce Rauner concerns me. I believe that my district needs someone who is committed to standing up for them and not the dangerous agenda being pushed by Gov. Rauner and his allies.”

Proft says local stories in the new West Cook News are part of a package.

“We want to provide community information combined with state-related stories about policy matters that don’t get covered,” he said. “The politicians in Springfield won’t [talk about] it, and neither will the Chicago press corps, so were going to do it.”

An example of Local Labs’ data crunching is localized pension and debt data in the 7th District. An analysis of the “Most debt-ridden suburbs in West Cook” includes police and fire pension shortfalls. Melrose Park’s debt is tops at $203.6 million according to figures from the Illinois State Comptroller, followed by Oak Park $194.2 million and Bellwood at $129 million.

Proft says he wants to present data on a local level that demonstrates how decisions in Springfield are affecting readers.  Working with reporting teams from LocalLabs, Proft says he suggests stories and discusses what reporters should cover.

A note to readers in the first issue says: “We will present the policy arguments being made and frame the choices being offered in order to foster a dialogue that produces the most productive outcomes available.”

But front page headlines reveal the reason Liberty Principles PAC declared their $14,000 support to the Illinois State Board of Elections: “Chris Harris wants to fight ‘machine politics’” and “Our View:  7th District’s Chris Welch is indicative of what’s wrong in Illinois politics.”

“Every newspaper is an election tool,” Proft said. “We’re just transparent about it. Show me a newspaper that doesn’t report on certain candidates and make endorsements. We’re just honest about it.”

“LocalLabs delivers customized editorial and advertorial solutions online and in print,” the company website says.  “We use technology to more efficiently gather and produce commodity news, community calendars and briefs.”

In 2012, Timpone’s Journatic, LLC sent waves of panic through the journalism world when an NPR story explored the company’s then-policy of outsourcing local news reporting to remote reporters as far away as the Philippines.  An affiliated company, Blockshopper, was accused in 2012 of falsifying bylines. A reporter for an article that appeared in the Chicago Tribune’s TribLocal was accused of an instance of plagiarism. With a name-change in 2014 the company bounced back and now includes online coverage of local courts, countywide news websites and localized reporting projects around the country.

So far the six new newspapers will not feature paid advertising, Proft said.

“It’s more of a mission-focused enterprise than a profit-driven enterprise.”

The new paper asks readers to tell West Cook News what they want to read about.

“This is a community forum where we speak with you rather than talking at you,” an editorial note says. “We want to hear from you. We welcome your story ideas, your editorial submissions, and your constructive critiques. Tell us which stories you find helpful, which stories you enjoy and, conversely, which stories missed the mark.”

“Like any outlet you want a feedback loop of people who pick [the newspaper] up and read it,” he said. “We’re interested in other ideas for stories that we didn’t cover or something you always wanted to understand.”