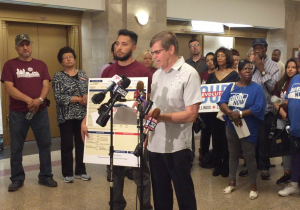 Long a legendary event of Chicago-area politics, the Cook County Democratic party slating event takes place on Thursday and Friday at the Erie Café in Chicago.

There will be no smoking, and hence, no “smoke-filled room.” These days, parts of the meeting are open to the public, although there is also a closed session.

“Thursday we’ll hear from the judge candidates and countywide offices and then Friday well finish up with the governor’s race,”  said Jacob Kaplan, executive director of the Cook County Democrats.

Traditionally the Cook Democrat’s slating event was a ritual observed by political junkies and insiders. It was said that candidates would beg, grovel and kiss the pinky rings of 80 committeemen – 50 Chicago aldermen and 30 suburban Cook politicians —  each with a weighted vote determined by Democratic voter turnout in their district.

Those who agree to abide by the party’s endorsement and pony up $40,000 for mutual advertising have the possibility to be slated.

But Cook County Democrats are feeling a culture shift that may change the flavor of local politics now and in years to come. The party of ward heelers and precinct captains is being infused with new waves of “direct-action Democrats,” fresh from six months of demonstrations and Facebook campaigns.

“It’s very clear that President Donald Trump and Republican Governor Bruce Rauner have been two of the best organizers the Democratic Party has ever had,” said State

Rep. Lou Lang (D-Skokie) who serves as Niles Township committeeman and executive vice-chairman of the party. “They have created angst and interest and activated a whole group of Democrats who used to just stand by the sidelines and now are all revved up. I have been involved with the Niles Township Democrats for 50 years and this is completely unprecedented. When you call to say ‘can you come do a phone bank?’ they show up.”

In past years, some old-school Democrats have dismissed their progressive colleagues as “Goo-Goos” and “Lakefront Liberals” without the political muscle to win elections or build powerful coalitions.

But this time the numbers are high and  people are visible. Many of the newly engaged Democrats have joined anti-Trump national groups such as Indivisible, Our Revolution (Bernie Sanders supporters) or Pantsuit Nation (Hillary Clinton supporters). They are now looking to get involved in local politics. 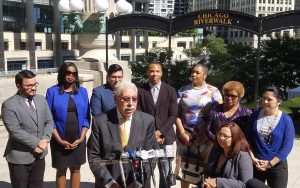 “Simply going to rallies isn’t enough,” Lang said. “Sitting around in rooms with people of like mind doesn’t win elections. You have to put some shoe leather into it.”

In May, the Cook Dems tried to sign up volunteers to canvas and register voters with a “Cook County Together” event. But that effort was abandoned. Cook County Dems chose to partner with the Democratic National Committee in a grassroots-building campaign called “Resistance Summer,” Kaplan said. Resistance Illinois is run by the Illinois Democratic County Chairman’s Association and the Democratic Party of Illinois, headed by House Speaker Michael Madigan.

But those status-quo Illinois politicians don’t generate the street heat to get people excited about the Democratic Party, said Clem Balanoff, a former State Representative who ran the Illinois Sanders campaign.

“If the [Illinois] Democrats don’t change, they’re going to be irrelevant,” Balanoff said. “There isn’t anything that’s exciting the Democrats. They have to look at a visionary agenda: free college tuition, a $15/hour minimum wage, universal healthcare, economic development.

“Bernie (Sanders) got 49.5 percent of the Illinois vote because he offered a message of hope that clearly spoke to working men and women, seniors and young people – a broad section of the electorate. It wasn’t that Donald Trump got more votes in Wisconsin, he actually got fewer than Mitt Romney [in 2012], but the Democrats didn’t come out to vote.”

The culture clash was evident Aug. 1 in the County Building when Balanoff and members of Our Revolution and several other groups protested outside the offices of Cook County Assessor Joseph Berrios. Berrios chairs the Cook Democrats.

“When you look at the Cook County Democrats, [some] have ethical challenges and problems,” Balanoff said. “Those aren’t the candidates that are going to capture the voters’ imaginations.”

Hyde Park Financial Manager Fritz Kaegi announced that he would challenge Berrios for the Assessor’s race in the 2018 Democratic primary. Kaegi will likely ask for the slating committee’s approval, this week, but will be unlikely to receive it.

But some Democrats believe that there’s room for everyone in the party.

“The Democrats have always been a Big Tent coalition,” said State Sen. Don Harmon (D-Oak Park) who serves as Oak Park Township committeeman and is suburban vice chair of the Cook County Dems. “We take all comers, white, black, Latino; gay or straight, conservative or liberal.

“Right now, we have a clear common cause. It is to defeat Donald Trump’s agenda nationally, and Bruce Rauner’s here in Illinois. We need to focus on those priorities for the sake of our country and our state. We shouldn’t be distracted by infighting over any sort of party purity,” Harmon said.

Can newly energized progressives get along with the old-school Democratic Party in Cook County?

The “direct action” approach is a way for outsiders and marginalized groups to get issues on the agendas of those in power, said Anna Marin de Gutierrez, Jane Addams Seniors in Action manager of civic engagement and movement politics. But it takes much more work to get a seat at the table.

“You went on a march, or you signed an online petition or you made your five calls for a month and you’re done. But it takes more than that. It takes a sustained effort to create long-term change.”

The right candidates need to be chosen, supported and then held accountable by supporters, she said.

“The Bernie effect may take several election cycles to acutely be felt,” said

Kilroy is helping with the campaign for state representative by Evanston-based attorney Mary Rita Luecke, a Sanders-inspired former school board member.

“There will be open seats over time and opportunities for Bernie supporters to change the face of Illinois politics, but it’s an uphill battle,” Kilroy said.  “The party doesn’t care. If [the candidates] turn out to be good vote getters, they will find a way to work with them.”

Meanwhile, Lang, speaking from his decades of experience, warned against “making perfect the enemy of the good.”

“In Illinois, the only way to change public policy to advance your ideology is to win elections,” Lang said. “Before we deal with Donald Trump, we’ve got a disaster right here in Illinois to deal with. Democrats should not be attacking each other. We should all have our oars pulling the canoe in the same direction. I try to motivate people who want to help.”