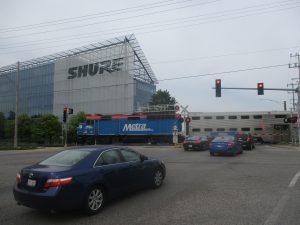 Northbound Milwaukee District North Metra Line train rides past Shure Inc. headquarters. The company supports the possibility of adding Metra station nearby because it would benefit their employees and Niles as a whole. (Photo by Igor Studenkov/for Chronicle Media)

Niles, a suburban village near Chicago’s northwestern border, is looking into building something it never had — a commuter train station.

As previously reported by the Chronicle, over the last decade, there have been a number of attempts to build new Metra stations in Chicago and its suburbs. What makes Niles stand out is that it’s one of a handful of municipalities in Cook County that never had any kind of commuter train service. While what is now known as Milwaukee District North Metra Line runs along Lehigh Avenue, commuters wishing to reach Niles had to get off at either the Morton Grove station to the north or the Edgebrook station to the south, and take a bus the rest of the rest of the way.

The Village of Niles is looking to build a station somewhere between Touhy Avenue and Howard Street, at roughly a midway point between the two existing stations. The feasibility study officially began on April 2, 2018, and it is expected to be completed by November.

This is part of Niles Andrew Przybylo’s vision for redeveloping the historically industrial area within a triangle formed by Touhy Avenue in the south, Lehigh Avenue in the northeast and Gross Point Road in the northwest. The mayor envisions the area as a hub of art and culture, something that would attract new residents, as well as visitors from the surrounding suburbs and beyond. Having a Metra station to link the “Touhy Triangle” to downtown Chicago is a major part of it.

Milwaukee District North Line runs from Chicago Union Station to the village of Fox Lake near Illinois/Wisconsin border, stopping in several Chicago neighborhoods south of Niles and a number of cities and villages to Niles’ north. At the Glenview Metra station, riders can transfer to Amtrak trains, with Hiawatha route continuing north to Milwaukee and the Empire Builder route traveling as far northwest as Seattle and Portland. 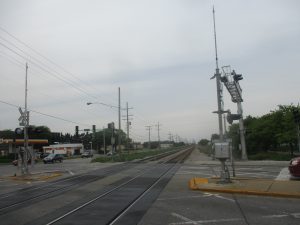 Niles is served by Pace routes along all of its major streets, but only Route 270 and Route 290, which travel along Milwaukee Avenue and Touhy Avenue, respectfully, stop in Chicago — and even then, they don’t go as far as downtown. CTA Route 85A stops near Edgebrook Metra station, traveling in a loop along Caldwell, Touhy and Lehigh Avenues to provide service along southern side of the Touhy Triangle. Pace routes 210 and 250 stop within walking distance of Morton Grove station, connecting riders to central and northern portions of Niles.

The Touhy Triangle area has historically been dominated by factories, warehouses and wholesellers, though that has been gradually changing in the last three decades. It is home to the Leaning Tower YMCA, which takes its name from the Leaning Tower of Niles — a half-size replica of the Leaning Tower of Pisa. The structure was built in 1934 by industrialist Robert Ilg as part of a recreation park for employees of his company, the Ilg Hot Air Electric Ventilating Company. In 1960, his heirs donated the land to the YMCA — with the stipulation that the YMCA maintain the Leaning Tower until 2059. The YMCA struggled to live up to its end of the deal, so, in 1995, it leased out the tower to the Village of Niles, which took over the responsibility for upkeep and repairs.

Since Przybylo was elected mayor in April 2012, he floated the idea of turning the Touhy Triangle into an art and entertainment destination, with the Leaning Tower of Niles as a centerpiece. But it wasn’t until the Aug. 21, 2014 Niles Chamber of Commerce and Industry breakfast that the village revealed a more concrete “vision” for the corridor — which called for a new business class hotel, a new convention center, a park around the tower, a new facility for the Leaning Tower YMCA further northeast and a Niles Metra station. As Niles Economic Development and Marketing Coordinator Ross Klicker explained at the time, the village had nothing against the existing industrial businesses within the triangle. But the village believed that many industrial buildings in the corridor were decades old and “functionally obsolescent,” so if a businesses wanted to upgrade or expand, they would have to either “downsize, right-size or move.” 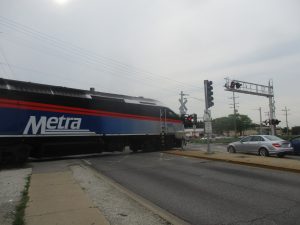 Over the next four years, the village made several changes to encourage that kind of development, creating a Tax Increment Financing district to help cover the development costs and changing the zoning from mostly manufacturing with a few lots zoned for retail into the newly created “entertainment mixed-use” zoning, which allowed for art studios, entertainment facilities, bars, restaurants and offices.

In Sept. 11, 2016, the village unveiled a Touhy Triangle Master Plan, which was developed by Chicago-based Lakota Group and Vernon Hills-based Gewalt Hamilton Associates. It built upon the original vision and added a residential component with more retail around the park that would be built around the Leaning Tower. While the project team emphasized that a Metra station wasn’t part of the plan, it recommended that Niles look into it “in the relative future”

In August 2017, the village bought the Leaning Tower from the YMCA outright, setting the stage for extensive repairs and refurbishment. And, on Jan. 10, 2018, it sent out a Request for Proposal for a Niles Metra station feasibility study — the first of the several steps necessary to build a new Metra station.

On March 27, Village of Niles Board of Trustees voted unanimously to give the contract to Chicago-based AECOM Technical Services. Lakota Group is also involved in the process, helping with the public outreach component of the study.

While the study website lists the Touhy Triangle revitalization as the major reason behind the station, it also argues that it would provide more parking options for commuters from the surrounding communities and improve transit connections. As part of the study, the two firms will identify three potential sites. 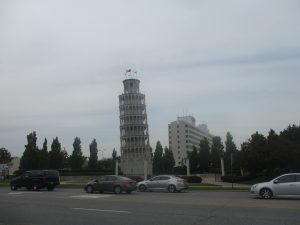 Niles mayor Andrew Przybylo is looking to transform the Touhy Triangle, an area between Touhy Avenue, Lehigh Avenue and Gross Point Road, into an arts and culture hub, with the Leaning Tower of Niles (pictured) as its centerpiece. (Photo by Igor Studenkov/for Chronicle Media)

According to the documents provided by the Village of Niles, the study will include extensive public outreach, with the companies getting input from village staff, as well as local businesses and other stakeholders. The study will also include a “community speak-out” meeting, where Niles residents and businesses will have a change to ask questions and raise objection. One the first draft of the feasibility study is developed, the village and other stakeholders will have a chance to weigh in, and the public will have a chance to weigh in during an open house.

Mitch Johnson, the Niles communications and multimedia coordinator, said that the new station would be a great asset to the village as a whole.

“A Metra Station in the Touhy Triangle would provide additional transit options to residents and businesses alike.” he said. “Residents would enjoy the another tremendous transit option for their work and recreational commute, and our businesses will benefit by having another easy option for [Chicago] residents to come out to Niles for employment opportunities.”

Alicia Bermes, the NCCI’s current executive director, said that “The Chamber is very excited for this project to move forward,” she said. “This will add to the already strong business base in Niles.”

The one business that would be directly affected is Shure Incorporated, an audio equipment manufacturer whose corporate headquarters are located at 5800 W. Touhy Avenue, across the railroad tracks from the Touhy/Lehigh intersection. The Touhy Triangle Master Plan suggested the vacant lot directly south of its campus as a possible station site. Even if some other site is chosen, Shure is one of the area’s most prominent employees.

Mark Brunner, Shure’s vice president of corporate public relations, told the Chronicle that a Niles Metra station would benefit his employer in many ways.

“Frankly, we’re enthusiastic about the project, because we believe it will increase access to convenient transportation for our associates,” he said. “One interesting fact is we have recently opened a 100-person office in downtown Chicago, so obviously for people commuting between those two properties, that would make a very convenient option.”

Brunner also said that, in his experience, when a commuter train station opens, restaurants and service businesses tend to open nearby. That would benefit Shure’s employees and Niles in general, he said.

“In addition [it would make] it easier for any of our business partners who may be staying downtown, making them a convenient path to our office,” he said. “We’re enthusiastic about the project and we look forward to the results of the Metra study.”