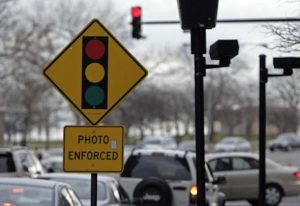 A far-reaching federal probe into public corruption has shown a connection between red-light cameras and some Illinois politicians. Three state lawmakers and one mayor with ties to SafeSpeed LLC, a red-light camera company, have either stepped down from their posts or face unrelated federal charges.

Where the federal red-light camera probe and the broader public corruption investigation end is anybody’s guess at this point.

Already three state lawmakers and one mayor have come under suspicion as part of a far-reaching federal investigation, although none have been charged with any wrongdoing in connection with the red-light cameras.

Former state Sen. Martin Sandoval, D-Chicago, and Oakbrook Terrace Mayor Tony Ragucci had connection with SafeSpeed LLC, a red-light camera company, and have come under a cloud of suspicion because of it.

Sandoval allegedly lobbied the Illinois Department of Transportation, which he oversaw as chairman of the state Senate’s Transportation Committee, to get cameras in Oakbrook Terrace although IDOT had rejected previous requests to install them in the community.

Campaign finance records show that Sandoval received $11,000 from SafeSpeed, including a $10,000 donation in 2016, the company’s largest donation to any politician or political organization in Illinois.

Ragucci resigned after campaign records revealed that he paid $30,000 to attorney Thomas Crooks from his campaign fund for legal work done because of the federal probe and his connection to the company.

The third state lawmaker with SafeSpeed and Oakbrook Terrace ties, state. Sen. Tom Cullerton, D-Villa Park, remains in his position but has been charged with embezzlement for allegedly taking nearly $275,000 in salary and benefits from the Teamsters union for doing little or no work.

Cullerton also allegedly wrote a letter on Oakbrook Terrace’s behalf to IDOT to try to secure the red-light cameras for the community.

Ragucci got a $500 donation from SafeSpeed in 2011, records reveal.

Also caught in the public corruption probe is state Rep. Luis Arroyo, D-Chicago. Arroyo received money from SafeSpeed but is not facing charges or suspicion because of it. He does, however, face federal bribery charges for allegedly offering a state senator $2,500 per month to back an electronic sweepstakes gaming bill and making the first monthly payment.

Already with more connections than a “Criminal Minds” victim-unsub board, even more lines are expected to be drawn as the federal probe continues.

“It’s anybody’s guess where this thing goes,” said Christopher Mooney, a professor of state politics at the University of Illinois at Chicago. “It has already been extraordinarily far-reaching, with connections to Cullerton and Sandoval. You just don’t know where this is going. You have Sandoval, who was the man in transportation. You have Arroyo. These are not fly-by-night guys.

“Who knows what’s next? These things normally move up the food chain, but it’s high already.”

Mooney said the federal probe is another black eye for the state and its elected leaders.

“In Illinois politics, there have always been people who are going to enrich themselves one way or another,” the UIC professor said. “When skirting the edges, people do trip up.”

Mooney said as the saga plays out, it is another example of the huge factor money plays in Illinois politics.

“I think the red-light camera situation is probably the result of too much money and too much influence from companies making the money,” he said. “They had an incentive to make it happen. If they were less than scrupulous in getting there, the thought was ‘so be it.’”

Mooney said he is not surprised that the probe has focused on smaller communities, including federal searches being done in Lyons and McCook, and the aftermath in Oakbrook Terrace. However, despite the searches being conducted, no charges have been filed against any Lyons or McCook officials.

“If it is going to happen, you are less likely to be caught in small towns. Tiny towns may have a big tax base because of industry,” Mooney said. “The few hundred people who live there may have less importance than the tax-base people. There is not as much oversight in a smaller town. There is not the oversight through auditing. That is what happened in Dixon. In Chicago, every two months there is an audit. In Dixon, there were no double checks. That’s how she was able to steal the money.”

Rita Crundwell, the former comptroller and treasurer of Dixon, embezzled $53 million from the city.

Mooney said the federal probe seems to be nowhere near its conclusion, noting that trials start happening when a probe nears the end of its course.

“It is not looking like the beginning of the end right now,” Mooney said. “Local officials need to hold onto their hats.”