At a time when people are reminded to look for the helpers, North Shore Helpers, a 501(c)(3) charity, is looking to offer a helping hand during COVID-19.

Since 2016, North Shore Helpers, with donor support, has hand-delivered gifts and new merchandise to individuals in underserved communities in Chicago. 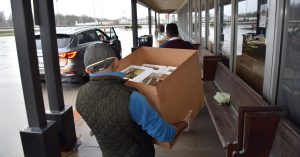 “Because of this COVID-19, we decided to raise money to help support local restaurants,” said Dan Gelfond of Riverwoods, co-founding member of North Shore Helpers.

“We buy meals at local restaurants and then deliver those meals to the frontline workers at different hospitals in the area.”

On April 29, Gelfond and his wife Marla Gelfond, also a co-founder, picked up several dozen individual meals from Max and Benny’s Restaurant in Northbrook.

“It feels so rewarding and so great to be able to give back to everybody,” Marla Gelfond said. “We could not be happier and pleased with the results. We really thank all our donors so much for all of their generosity.”

North Shore Helpers began meal deliveries to health care facilities on Easter and will continue this level of community service through COVID-19.

“We’re so excited to be able to help the front line,” Marla Gelfond said.

The mission of Give InKind is, “to ensure that everyone feels supported by their communities, whenever and wherever they need it.” 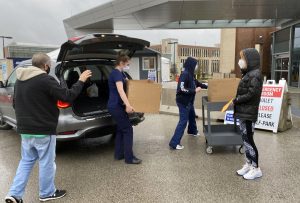 Food must adhere to strict requirements for safety and must be packaged for consumption under guidelines outlined on requestor pages on the website.

Laura Malcolm of Tacoma, Washington founded Give InKind with her husband James after the couple experienced the stillbirth of their first child Layla.

Loved ones offered emotional support such as flowers and meals.

The couple then identified a niche to help others and acted in honor of Layla’s memory.

“Give InKind was created to make it easy to give support during times of need, but we had no idea the depth and breadth of support that would be called for during a global pandemic,” Laura Malcolm said to Chronicle Media.

Malcolm added, “Seeing the way communities across the United States have taken care of our frontline workers, by feeding and nourishing them, has been nothing short of incredible.

“These heroes are working tirelessly to keep our communities healthy, and the volunteer organizers, restaurants and donors coming together to feed those healthcare providers is incredibly inspiring,” Malcolm said.

“I’m grateful to be one small piece of that puzzle, and endlessly grateful for everyone working together during this time,” Malcolm added. 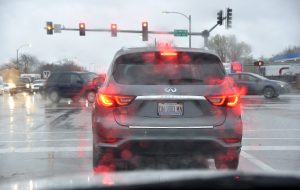 Ahead, in their van, Dan and Marla Gelfond of Riverwoods are on Waukegan Road in Morton Grove, during a dinner delivery to Advocate Lutheran General Hospital in Park Ridge. (Photo by Karie Angell Luc/for Chronicle Media)

“They so appreciate the fact that they weren’t forgotten about.

“They are as much on the frontline as our doctors and nurses,” Regnier said.

“They always say there are two ways to comfort people, hugs and food, but one of them (hugs) is out of the question,” Regnier said.

“We’re very, very happy to participate, not only to keep the business afloat, but anything that we can do to possibly help others is a nice thing to do,” said David Gomez of Highland Park, manager of Max and Benny’s.

About health care workers, “Those guys are the ones on the front of the line,” Gomez said.

“They’re taking a lot of risk.”

“When we first started this, I honestly didn’t think we were going to be able to raise money from people because I thought it was just a bad time to ask for money,” Dan Gelfond said.

“People came out of the woodwork to help these frontline workers,” Gelfond added.

“And when we went to the restaurants, some of them were almost in tears, that we were coming and helping keep them in business, literally, because they’re hurting big time right now,” he said.

Larry Rosenthal of Northbrook, also a founding member of North Shore Helpers, had an immediate family member in his household test positive for COVID-19 who has since recovered.

About essential workers, “They put their life on the line, knowing they could get sick,” Rosenthal said.

“We are always looking for something new and exciting to help raise funds to assist various charities while being totally involved.

“We saw the need for the frontline workers and thought this would help them greatly,” Rosenthal said.

“Hopefully, we are an inspiration for others to give.”