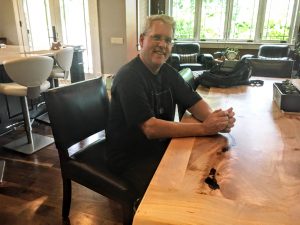 Northbrook’s Dan Miller, at a table like the ones his new construction school will build on Chicago’s West Side. (Irv Leavitt photo)

Ever wonder about what you’d do if you somehow wound up without enough pockets for all your money?

Dan Miller made a pile in the payroll management business, then bought a dream house in Northbrook, with over 6,000 square feet for him and his family to knock around in.

As the house was going up, he got to know the builder, Scott Simpson, another Northbrook guy, who had an idea to help him spend his money.

A year in the planning, their new operation, Revolution Workshop, is intended to chip away at two of the bigger problems in Chicago: the staffing shortage in the construction business, and poverty.

Revolution’s roots trace back a few years, when Simpson and his partner, Tom Kenny, hired an ex-convict, still wearing an ankle monitor. It was a hard way to go, training a guy who didn’t even have experience showing up on time, Simpson said. 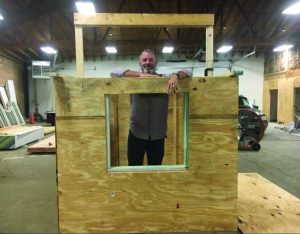 Scott Simpson stands in a miniature house like the ones that students will practice building, at Revolution Workshop, on Chicagos West Side. (Irv Leavitt photo)

One of his jobs had been to help turn a big plank, cut from a tree removed from Miller’s property, into a table.

It was a good-looking table. The new employee was particularly proud of it when he delivered it to Northbrook, and he wound up sticking in the construction business.

Simpson and Kenny had the thought of formally training more down-on-their-luck employees in construction, while employing them to build furniture to sell to other rich guys. Most of the workers would graduate to other companies, because Scott Simpson Builders isn’t that big.

They asked Miller to help.

“OK, just one thing,” Simpson remembers Miller telling him. “It’s got to be a nonprofit.”

Miller wasn’t overly fascinated by the furniture business, or contracting, for that matter. But like Simpson and Kenny, he wants to effect social change.

“My interest is to make some impact, however small, on both poverty and violence,” Miller said.

“Without an answer to employment, it’s a very, very tough road to reduce the violence.”

Connecting unemployment to Chicago’s violence, drug abuse, and other social ills isn’t a novel concept. It was back in the local headlines after the Rev. Michael Pfleger made it a key issue for the anti-violence protest that closed down the Dan Ryan Expressway July 7.

The issue is stocked with seeming contradictions. Though unemployment is at a nearly 50-year low, about 43 percent of black males 20 to 24 remain unemployed. And yet construction is slowed here due to a lack of what amounts to entry-level help.

Entry-level does not mean the same thing for everybody, and certainly not for young people who have already found themselves on the wrong side of the law.  The same people on Chicago’s West Side — where Revolution is starting its first construction training course late this month — who are likely to wind up in prison may also have not had much of an opportunity to acquire the simple math and measurement skills that will get them through the first day on the job.

“Many have had a bad education,” Simpson said. “We have to help them just get to a point where we can help them.”

Beyond the math and ruler work, that means learning how to get along on the job site, too. One day a week, social skills will be part of the curriculum.

“The culture of construction is different from what they’re used to,” said Manny Rodriguez, the workforce-training veteran hired to direct Revolution.

“When these guys grow up on the street, they’re told that certain people can’t be disrespecting them. But a foreman is not going to pat you on the back when you’ve messed up a cut.

“The foreman is going to say, wtf, how many times am I going to have to show you how to do this?”

They need to take the criticism and move on. If they’re really harassed, they can fight back legally, he said.

Once in the program, the students will have to learn to follow rules they may not have had much truck with previously, Simpson said.

“We’re going to hold them accountable,” he said. “But with passion and compassion. Not zero tolerance, but very little tolerance.”

Several factors have led to the labor shortage. No longer do teens gain interest in trades through public school shop classes, which have been axed to make way for a strange, overwhelming prioritization of college prep.

And about a quarter of the workers who left during the downturn 10 years ago never came back.

Rodriguez said an accredited 10-week pilot course of 10 students — about half the planned future classes — will start Sept. 24 in a 7,500-

square-foot building at 3410 W. Lake St. Instructors have been hired, to be paid out of about $1 million in donations made over the last year.

Miller has been the biggest donor, but there has been a considerable outpouring from the North Shore. A January open house at Miller’s house brought in about $100,000, Rodriguez said.

“They see the violence,” he said. “Somebody sitting on their couch in their living room, they say to themselves, ‘There’s got to be something I can do.’

“We’re talking about North Shore folks, they’re going to be our clientele for customized natural wood furniture,” he said. “People in the hood don’t buy this.”

As for the students, Miller said, they’ll be ready for jobs when they graduate. And one big local construction firm has bought into the program, and promised to sponsor graduates for union carpentry apprentice training. In those programs, they can earn as they learn and wind up making $27 an hour as journeymen.

“Ultimately for us to be successful, I really want to get more black and brown and women into the unions,” Rodriguez said. “It’s been a challenge in the past.”

Like many other legacy systems, unions give advantages to workers whose parents are members. So the same sorts of people continue to dominate the ranks.

One of the lessons the students will hear, Rodriguez said, is that a union member has to give more than dues to succeed. When jobs are parceled out, those who have been on picket lines and call banks and gone to meetings have a better chance at getting them.

Ex-cons are nothing new in the construction business. Revolution will filter them, Rodriquez said, similarly to the way the firms do. No students with sex crime histories will be taken, and random drug testing will be required.

“At the end of the day, it’s about workman’s comp,” Rodriguez said, referring to the wariness of drug use. “They don’t want their rates going through the roof.”

Local agencies, including some that Rodriguez has worked at in the past, have similar workforce training programs, but mostly for manufacturing. They’re sending student candidates to Revolution, and helping with some money and organization.

The firm has not yet turned to city government. “I’ve seen organizations that started with the political, and it’s very hard to get the political out,” Rodriguez said.

But some community groups and other agencies have already met with Revolution, and that will continue, Miller said.

“Revolution Workshop is not just going to be in the community, but be a part of the community,” he said. “We don’t have all the answers. We want their input.”

The space will be available to some groups, and the school’s presence will be signaled on the facade, he said.

“We’re going to put a mural up on the outside of the building,” Miller said. The principal artist will “work with at-risk youth, and those kids are going to do that mural.”

The partners don’t plan to stop at one location, but expand to the South Side and elsewhere on the West Side. Even after that, Rodriguez said, they won’t have put much of a dent in the need for labor, or the need for work, in Chicago, let alone outside the city.

“If six years from now, we’re not in another state, I’ll consider that I’ll have failed,” Rodriguez said.

— North Shore Men Plan a Revolution on Chicago’s West Side —-