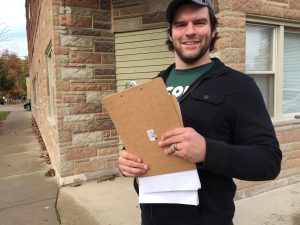 The Nov. 8 elections weren’t even over when some Forest Park residents realized the April ballot was already in play.

While members of citizen group “Say Yes to a Vote” collected petition signatures on Election Day to put video gambling on the April ballot for a binding referendum, they encountered clipboard-carrying strangers at the polling places.

Later that day, Mark Hosty, a former village commissioner and one of two local bar-owning siblings in town, filed petitions with these “nuisance referenda” – nonsense questions aimed at elbowing other referenda off the ballot, which only has space for three questions.

Hosty’s task was much easier than the Say Yes crew’s. The spoiler questions only required registered voter signatures from 8 percent of the total votes cast in the last gubernatorial election, fewer than 400 signatures total.

Say Yes members were attempting, over several months, to collect more than 2,700 signatures, equaling 25 percent of the number of registered voters — about 8,000 — in the town. 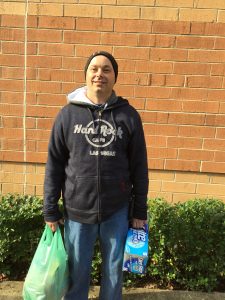 Wisconsin bar owner James Collis said he believes Forest Park bar owners should have a chance to get the revenue brought in by video gambling. . (Chronicle Media)

Other nonbinding referenda require signatures from 8 percent of registered voters who voted in the last gubernatorial election.

This is not the first time video gambling has been on the ballot. In 2013, voters cast “no” ballots 2-to-1 in favor of banning video gambling in a nonbinding referendum.

The Illinois Gaming Board made the threshold steep, making the signature count exceptionally high for citizens to vote video gambling out of their town.

About 2,700 local signatures which were collected this summer were thrown out after a petition challenge from John Hosty, Mark’s brother. Then the village council quickly voted to lift the ban on video gambling, with four votes in favor and the mayor, who is also liquor commissioner, abstaining.

“I was pretty neutral about video gambling,” said Say Yes volunteer Anna Friedman, “But now I’m motivated more than ever to get signatures because we deserve a vote.”

Village bar owners are complaining that because of the ban, they have missed out on three years of video gambling profits. Customers who want to play the games go to neighboring towns, they say.

Forest Park native Jim Collis, who now owns a Necedah, Wis. convenience store with a small bar and pizza restaurant said he couldn’t have survived without video gambling machines, which bring in $25,000-$40,000 per year, he said.

“I benefit. The state benefits. The township benefits,” Collis said. “”I feel sorry for the business owners [in Forest Park] who work 16-hour days,” he said. “[Video Gambling] is something that is a way to legally make money.  It’s not fair they are being denied that.”

In 2012, several Forest Park establishments jumped the gun and applied for licenses when the state declared video gambling legal. The online application for the Forest Park bar affiliated with Hosty failed to accurately answer the question whether or not any person at the bar had a family or business relationship with any local elected official. The application was answered “n/a” (not applicable) in spite of the fact that Hosty was a commissioner at the time. 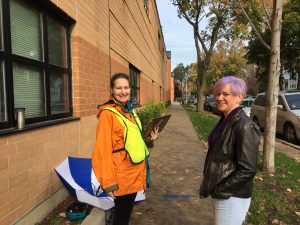 Anna Friedman chats with a voter wearing a bright green vest to show she belongs to Say Yes to a Vote. (Chronicle Media)

To make things more intense, sitting Village Commissioner Tom Mannix, a professional GOP political operative, was identified by one of the signature collectors as the architect of the petition drive, or at least an adviser.  As the signature gatherer, Ryan Donahue, of Oak Lawn, was paid $8,000 as a staffer when Mannix managed the unsuccessful 2014 U.S. Senate campaign of Jim Oberweis.

Another former village commissioner, Rory Hoskins, said he threw his endorsement to the mayor on the promise that the mayor would honor the 2013 nonbinding referendum that upheld the video gambling ban.

Emotions were raw as local petitioners chatted with out-of-towners and discovered possible payments of up to $200 had been handed out to harvest signatures for the dummy referenda.

Mannix denied he was coordinating the nuisance petitions.

If the space-taker referenda questions are accepted, it is unlikely the video gambling referendum will appear on April’s ballot. Say Yes members are determining how to proceed. Challenging signatures on local petitions involves legal fees and can run up the expenses.

“It’s sad that the forces of video gaming are so afraid of a vote,” he added.