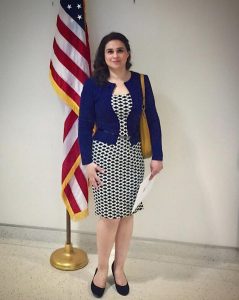 Dima Ali, an Oak Park resident, became a U.S. citizen in April and plans to be part of the Chicago Women’s March on Saturday. Ali, who immigrated from Iraqi 15 years ago, said she became more active in social issues after speaking to a group at her synagogue and bringing the room to tears. “After that, I started to think, ‘I have a voice and if I have a voice, I have to use it,’” she said.

Dima Ali is fearful that history is repeating itself.

“I lived under Saddam Hussein’s dictatorship and tyranny,” said the Oak Park activist who immigrated to the United States from Iraq 15 years ago. “It started like this. Things are so familiar. You would wake up and one of your rights would be gone, the borders were closed, little things.”

Ali said that prior to the travel ban going into effect last year, she wasn’t very active in social issues.

“I was kind of naive. I was in my own bubble,” Ali admitted, “but I started to recognize gestures like people saying, ‘Sweetie, you have an accent.’”

The Oak Park mom of two said she will not sit quietly by as this country is torn apart by hateful and disrespectful talk.

“It is not OK. This is my home,” Ali said. “I saw what happened to my first home. I am not going to allow that to happen here in my second home. Those things will happen over my dead body. I am going to use my voice and talents to do something.” 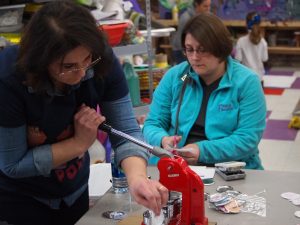 Ali, an artist, expects to be one of thousands on hand for the Chicago Women’s March on Saturday. Her husband and two daughters will join in, making the march a family event.

The Oak Park resident helped coordinate button- and sign-making efforts Sunday at an Oak Park art studio. She brought a button-making machine and her teenage daughter brought her own button-making device to help the Oak Park Progressive Women and others get ready for Saturday’s march.

“I believe my girls and other girls are the future,” Ali said. “We have to work on their behalf.”

She said it was President Donald Trump instituting the travel ban last year that got her off of the sidelines and into activist mode. 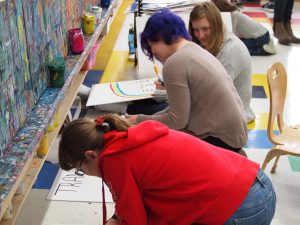 Still having a green card and her husband being a doctor who often attends medical conferences outside the United States, she realized if she accompanied him to a conference she might not be allowed back in the country.

She was asked to speak at her synagogue about her experiences as an Iraqi immigrant and her talk brought the room to tears.

After becoming a U.S. citizen in April, she held a fundraiser for the Iraqi Mutual Aid Society to celebrate. She said the $1,500 raised can pay for another person to go through the testing to be a U.S. citizen.

Ali said she also started getting more active in her community.

“I want to be a good example to my two girls,” she said.

She was unable to attend the first march last year because she was recovering from surgery. This year, however, will be a different story, Ali said. 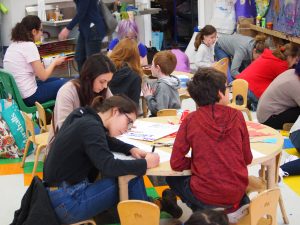 “Democracy is not assumed. You have to fight for it. Even if it is raining cats and dogs, unless I am sick or with stitches, I will be there,” Ali said.

The Oak Park resident said everyone who is looking to make a difference should be part of the marches taking place this weekend.

“I urge everyone who is able to attend,” Ali said. “Take hand warmers. It’s going to be crowded? So what? You don’t have to be in the middle of it, you can be on the side. Don’t just be a social media warrior in your house ranting. You have to do things in action, not words.

“You will think afterward, ‘I did something.’ I would urge anyone who’s able to, to march. This country depends on your voice. You may think what can one can one small voice do, but small by small by small makes one big voice.”

Ali said it is important to keep the momentum going, noting that people getting tired and failing to protest, lets wrong things become normal. 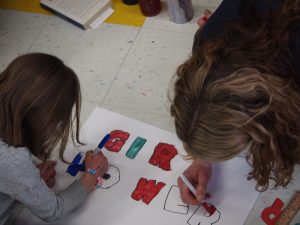 “This is not the America I know,” Ali said. “We need to keep up the protests, but it has to be done in a peaceful way. You don’t destroy property, that sends the wrong message. Twenty or 30 years down the road I want my grandkids to say, ‘My grandmother did something.’ I am doing things for my girls and other girls. It is important to keep this going.”