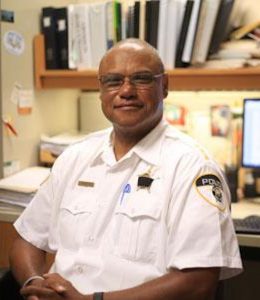 After more than a third of a century on the west suburban Oak Park police force, Police Chief Rick C. Tanksley has announced his retirement, effective Sept. 1.

Village Manager Cara Pavlicek thanked Tanksley for his service in a press release.

“Chief Tanksley has given the community many, many years of loyal service and for that we are grateful,” she said.

Tanksley, she said, “has continued to advocate for Oak Park’s community-oriented policing strategies and that impact has been profound here.”

Pavlicek said a decision on how to proceed in selecting Tanksley’s successor “could come as early as next week.”

Tanksley, who moved to Oak Park as a teenager, called his decision to retire “one of the toughest decisions of my career.”

“Oak Park is my hometown and the character of the community is part of who I am. But there comes a time in everyone’s life when change is necessary not only for my own personal and professional growth, but for the organization as well. That time for me is now.”

Tanksley came onto the Oak Park force in 1984 amidst bourgeoning racial tensions stemming from the belief of many black officers that they were systematically marginalized and had few if any career prospects on the force.

But he rose very quickly through the ranks, making sergeant in five years and commander two years later.

In 1988, in an attempt to address serious concerns about systemic racism in the department, the village hired former 34-year Chicago Police veteran Edward Buckney as deputy chief. The former commander of the Chicago Police Academy became the first African American to hold command rank on the Oak Park police force.

Tanksley recalled Buckney’s impact within the department in a 2005 interview.

“There was a lot of bitterness,” Tanksley said of the lack of black supervisors in 1988. With Buckney’s arrival, he and others felt hope.

“It immediately raised our morale. We knew at that point that doors were going to open.”

They did. The following year Tanksley was promoted to sergeant, a civil service rank, then promoted to the appointed rank of commander two years later, then deputy chief in 1994.

Tanksley has also expressed pride in managing what amounted to a hiring freeze on the department in response to collapsing village tax revenues due to the “great recession” that began in 2008.

However, Tanksley’s success story nearly unravelled when, in early January 2003, he was accused of sexual impropriety with a police department subordinate.

Following a four-week investigation, Tanksley admitted to having had a sexual relationship with a female dispatcher while deputy chief. In a prepared statement he acknowledged that his “past personal behavior has resulted in misconduct which violated the standards, rules, regulations and policies of the Oak Park Police Department and the Village of Oak Park.”

“I apologize for the difficulties and disruption caused by my behavior,” he concluded.

Tanksley was suspended for 45 days, served 18 months probation while undergoing required counseling. He returned to his job with no further issues.

“I will miss the job,” Tanksley said in a press release. “I will miss my colleagues, both in the Police Department and the Village. But most of all, I will miss the people of Oak Park with whom I have had so many rewarding interactions — often under some pretty trying circumstances. I know I will never be able to recreate such a unique experience, but I am content to leave that opportunity to those who follow me in pursuing a career with the Oak Park Police Department.”