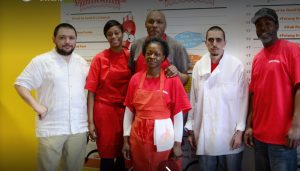 Deno Andrews (left) stands beside some of the employees of Felony Franks in Oak Park. (Photo courtesy of Deno Andrews)

Andrews envisions a franchise of different types of restaurants — from hot dog emporiums to pizza parlors — hiring only people who have criminal records, with support and training for employees from his not-for-profit Rescue Foundation.

When employees are ready, with the right training and experience, Andrews said, “I want to be able to crowdsource money to put graduates into business for themselves.” He envisions all of this after being elected Village of Oak Park Trustee in the April 2017 elections.

Andrews, 45, grew up in Oak Park. He formerly worked as a management consultant and spent several years in a biotech startup after graduating with a business degree from DePaul. He said the realization the ex-offenders made hard-working loyal employees was brought home 20 years ago.

“My father, sister and I ran a wholesale restaurant supply business, started in 1995, on the near West Side,” Andrews said. “We were near St. Leonard’s House, a sort of transition house for people who were leaving prison. At the time I subscribed to the same stigma that ex-offenders are bad people who would not be good employees.” Employees worked hard, lifting heavy items, often under a time crunch, Andrews said. “We had a very hard time finding good employees, except the ex-offenders who came from St. Leonard’s House. They were loyal, hardworking and honest.”

Calling Felony Franks the “Home of the Misdemeanor Wiener,” Andrews and his father Jim Andrews originally opened the restaurant in 2012 in Chicago’s near West Side at Jackson Boulevard and Western Avenue. But Ald. Robert Fioretti picked a fight with the family owned hot dog stand, saying he didn’t like the sign with a cartoon hot dog dressed in prison stripes. Fioretti also blocked a curb-cut for a drive-through. The Andrews family responded with a lawsuit, but after the senior Andrews was caught near gunfire outside the shop, the family packed up and reopened in Oak Park on North Avenue.

Andrews has employed eight former offenders, working with each person individually to help them establish a bank account and navigate some of the pitfalls that send people back to prison. 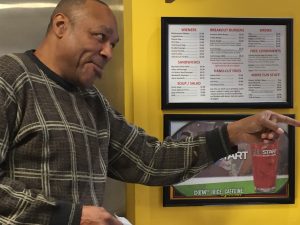 “They have challenges, like the thinking that got them there in the first place, or unreliable transportation,” he said.

Andrews hopes to share some of the leadership training he experienced in the white-collar world where he formerly worked.

“What is leadership in a restaurant? It’s being an example. Looking around and seeing what needs to be done, and being the first to want to do it,” he said.

For example, what to do with extra Italian sausages lingering on the grill after the lunch rush.

“We pride ourselves that our food is very fresh, so we would be throwing those sausages away,” Andrews said. “A leader will cut up the sausages, get some mustard and walk around the restaurant giving them out as samples,” he said. “I’m mad if we’re throwing food away. It costs the same to cut up and serve the sausages.

“Maybe someone will decide to order sausage next time. McDonald’s doesn’t rain leaders, they train robots.  I would never want a restaurant like that.”

Employee Andrew McKinney, 62, said a mistake in his life led him to lose a 23-year career with the AFSCME Council, where he was vice president. “He used to smoke cigarettes down in Springfield with Barack Obama,” Andrews chided.

“I had some dark times. I had a conviction at 58,” McKinney said. “I made a mistake; I made a wrong judgment call and ended up pleading guilty. I lost my wife, my home, my job, my pension — I was a state employee.”

McKinney had always enjoyed cooking, he said. “A higher power told me to attend culinary school at the Chicago Community kitchen at the Food Depository. I would highly recommend it to any young individual who wants to make a change in their life.

“I’m an early riser, so I open the restaurant,” McKinney said. “I’m reliable, dependable, responsible, trustworthy and sometimes hard-headed, and I love my job. “

“Deno holds me hostage to play chess with him sometimes after my shift and he won’t let me leave,” McKinney joked.

“I noticed Felony Franks near my cleaner,” said a Chicago customer, who ordered a Polish sausage and identified himself as “James.”

“I knew about their other location in Chicago, but I never went there,” he said.  “The staff is friendly, and it’s nice and clean.”

“French fries on the house!” McKinney shouted, loading a Polish into a bun.

“For every individual who made a mistake in their life,” McKinney said, “give yourself a second chance. You’re worthy of it, if you do the right thing. And the right thing is not following what’s going on in the streets,” he said.

As for politics, Andrews has worked with local politicians on campaigns, including 1st District County Commissioner Richard Boykin’s senate exploratory committee. Andrews served on the Health Department Board for two terms. Now that he’s not traveling, he’s finally ready to run for trustee, he said. High taxes and the dwindling amount of affordable housing in Oak Park are two of his biggest campaign issues, he said. All in all, he said he’s skeptical that government is capable of finding a solution for the 50,000 prison inmates who will eventually serve their time and return to the workforce, only to have the doors slammed in their faces, he said.

“The likelihood of former felons returning to a life of crime is incredibly high in the absence of legitimate work. Good people are forced to do bad things all the time,” Andrews wrote in a business essay online. “I am usually faced with the question of whether or not ex-offenders are worthy employees. To that I respond with the fact that solid training, open communication, and a clear understanding of duties and responsibilities makes a good employee … not what they’ve done in the past. Remember, there are many people out there with clean records who should be in jail for something … .”