A fan of the “Peanuts” comic strip, former President Barack Obama said one Peanuts gag is hitting too close to home.

He said the scenario where Lucy promises Charlie Brown that she won’t pull the football away when he goes to kick it is playing out politically nationally and in his home state of Illinois. Obama said the Republicans are Lucy and voters are Charlie Brown. 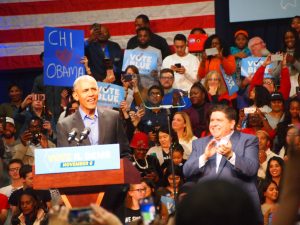 Former President Barack Obama addresses 5,000 people Sunday inside the UIC Pavilion at a Get Out the Vote rally as Democratic gubernatorial hopeful JB Pritzker looks on. Obama said Republicans are wrongly quick to take credit for the economy’s success. (Kevin Beese/Chronicle Media photo)

“Don’t be Charlie Brown with the football, Illinois,” Obama said at a Get Out the Vote rally Sunday in Chicago. “Don’t be hoodwinked. Don’t be bamboozled. Don’t fall for the okey doke. What they want to do is try to scare and distract you while robbing you blind.”

The keynote speaker at an event touting the Democratic ticket for state offices, led by gubernatorial candidate JB Pritzker, as well as congressional candidates Sean Casten and Lauren Underwood, said that Republicans have been shamefully saying one thing and doing another.

He said for the first time, at least in his lifetime, politicians have been blatantly lying.

What has been going on with Republicans saying one thing and doing another, Obama said, scratching his head, would be like him running ads while running, or re-running for president, saying that he was opposed to Obamacare “because I’ve run on it; I’ve worked on it. That’s my thing. I’ve owned it, but that’s not what these guys are doing. They’re doing the exact opposite: what’s up is down, what’s black is white. They’re just making stuff up.”

He said Republicans have spent millions of dollars on commercials saying they are doing one thing when, in actuality, they are doing the exact opposite.

Taking off his suit coat and rolling up his shirt sleeves, the former president said that Republicans want to take credit for the economy’s success now, but are not talking about where the economic recovery started. He said the economy created more jobs in his final 21 months in office than it has created in the 20 months since he left office.

“So, when you hear Republicans bragging about how good the economy is right now, where do you think that started? Who you think it was that did that?” Obama asked to roars from the 5,000 people present at the University of Illinois at Chicago auditorium.

He said he walked into a financial crisis when he took office, but was able to turn the economy around while providing 20 million people, 850,000 in Illinois alone, with heath care coverage. 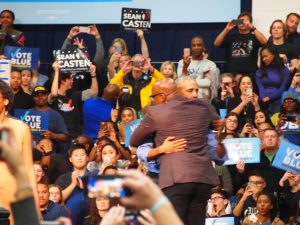 Obama said the economic recovery was slow due to the magnitude of the problem, but was thorough and got American corporations back on track.

“By the time I left office, wages were rising, unemployment had fallen, the uninsured rate was falling,” he said.

Obama called on those present at the rally to be agents of change. He noted that women’s rights and workers’ rights didn’t come out of thin air.

Obama said in his travels across the country people have wondered to him if the unconquerable spirit of America still exists, if we still rise and fall as one nation, as one people.

Obama said whenever he pushed for programs like health care or early childhood education, he always heard from Republicans about the impact on the federal deficit. For the tax-cut plan, which gives $1.5 million to companies already making record profits, Obama said, Republicans had no problem with increasing the deficit.

Connect with us in LinkedIn