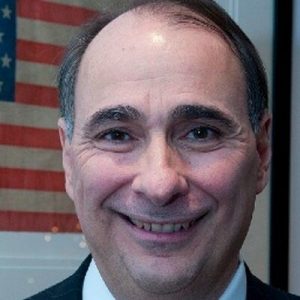 Lost in the political super nova of Barack Obama’s ascension to the presidency in 2008 is the fact that just six years earlier, Obama was dangling on the cusp of political irrelevancy as an Illinois State Senate back bencher who had just lost a congressional primary race.

Then Obama met David Axelrod, who soon was organizing the political operation and crafting the message that would see Obama rise from relative obscurity in Illinois to the U.S. Senate and then the White House in just four electrifying years.

But long before Axelrod came to America’s awareness as Obama’s most trusted confidant and adviser, he was a respected Chicago political journalist and Oak Park resident. Now, at age 62, Axelrod is a sort of elder statesman for progressive politics in the country. Besides offering his views as a Senior Political commenter on CNN, he heads the non-partisan Institute of Politics he helped found at his alma mater, the University of Chicago.

On Sept. 6, Axelrod sat down with fellow veteran journalist and former Oak Park neighbor Charlie Meyerson before a packed house at Dominican University in River Forest. The event was the inaugural of what the Wednesday Journal weekly newspaper intends to be an ongoing series of events entitled “Wednesday Journal Conversations.”

Axelrod shared personal anecdotes along with his take on the national political process and the state of American society. While he has enjoyed major success on the business side of politics, it is the impact his work has had on ordinary people that is most meaningful for him.

He is both the son of an immigrant who came to American as a 12-year-old, and the father of a daughter who endured grand mal epileptic seizures. Those experiences profoundly affected Axelrod and informed his views on immigration and healthcare reform, among other issues.

Axelrod’s anecdotes were entertaining. After he and his wife moved from Oak Park to Burr Ridge in pursuit of appropriate educational services for their epileptic daughter, he found they had moved next to “one of the few African-American families in town.”

When he walked next door to introduce himself, Axelrod saw a man and a boy chipping golf balls around the back yard. He held his hand out and announced himself as the man’s new neighbor.

“No, I’m just visiting,” the man corrected Axelrod. “I’m Earl Woods, and this is my son, Tiger.”

“I just brought that up because it’s a good story,” Axelrod said with a satisfied grin.

While Axelrod has a deep faith in American politics, he is concerned with the turn our politics has taken in recent years. He warns that the ever-increasing polarization of our political culture must stop.

“When Donald Trump was elected I was surprised, and then I was angry, because I shouldn’t have been surprised,” Axelrod said. He said most of his neighbors around his second home in Michigan, “had Trump signs in their yards.” 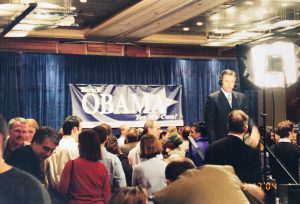 The crowd waits for Barack Obama to step onto the quite small stage at his US Senate primary victory celebration on March 17, 2004. His and David Axelrod’s lives would never be the same after that night. (Photo by Bill Dwyer/for Chronicle Media)

Axelrod said they “had been buffeted by all these forces,” dynamics they didn’t understand but feared. The Democratic Party, he said, made a major mistake in not focusing more on such blue collar, disaffected white voters, who he said are fundamentally good people who feel ignored by the Democratic Party.

“They did feel abandoned and disrespected,” Axelrod said. “Generalized as toothless, ignorant racists.”

Axelrod bemoaned such “siloing,” saying it damages the democratic process and our national fabric. He intends to do his part to bridge that divide this fall when he’ll take a group of University of Chicago students to central Illinois to visit Eureka College, Ronald Reagan’s alma mater.

“The community around (the college) was very supportive of Donald Trump,” Axelrod noted. His goal is to foster discussion between conservative central Illinois residents and more liberal urban university students. The visit will be followed by Eureka College students visiting the University of Chicago campus in the near future.

It is not merely an academic exercise for Axelrod, who says, “We have to break down these silos. This siloing of our country is really, really dangerous.”

Axelrod also offered some advice to the current president.

“I think Trump is learning this,” Axelrod said, adding with a smile, “I hope.”

Axelrod offered an anecdote about the daunting days after the election but before Obama was inaugurated, as he and the president-elect huddled with numerous economic experts. Both men realized they were discussing a national economy “cascading over a cliff.”

After listening to the experts paint their dark picture, Obama sat back and said wryly, “Well, it’s too late to ask for a recount, I guess.”

Axelrod said his favorite moment during his White House service was the night the Affordable Care Act passed. He said he had had his doubts about the wisdom of expending political capital on a legislative effort that had defeated seven previous presidents.

Luckily, Obama disregarded his advice. When the president asked his legislative liaison if there was any hope of passing the ACA, the aide replied, “That depends on how lucky you feel.”

Axelrod said Obama smiled and said, “I’m a black guy whose name is Barack Hussein Obama and I’m President of the United States.”

Passing the ACA is also a poignant memory for Axelrod, who recalled receiving an urgent message from his wife after she found their little daughter “blue and limp in her crib, frothing at the mouth.” The diagnosis was epilepsy. Besides the pain of seeing his baby suffer, Axelrod found himself paying out of pocket medical expenses of a thousand dollars a month on a $40,000 annual salary.

The night the ACA passed, Axelrod left the celebration in the Oval Office. “I went across the hall, closed the door and I sobbed,” he said, overwhelmed by the realization that “there were families that weren’t going to have to go through what we went through.”

Axelrod said the relentless efforts by Republican lawmakers to “repeal and replace” the ACA have been his most “exasperating” experience. He accused Trump of being “devoid of any understanding or feeling about that.”

Asked about the effect of the current president’s agenda on Barack Obama’s legacy, Axelrod was blunt.

“I don’t give a rat’s ass about that,” he said. “The issue isn’t about his legacy, the issue is about the lives of all the people (the ACA) has helped.”

It is the long-term consequences of Trump’s approach to governance that most worries Axelrod.

“What really worries me is, I think there is tremendous torque on our institutions,” Axelrod said. He criticized Trump’s “fundamental disregard for and lack of understanding of democratic institutions.”

While he doesn’t see any indication that Trump will depart the presidency anytime soon, Axelrod said the president “doesn’t look to me as a guy who loves his job. I could easily see him look for a way out.”

Axelrod said national Democrats have opportunities in 2018 and 2020, but that people shouldn’t expect immediate success due to “structural blocks” to Democrats winning enough races to take over the House and Senate in the mid-term elections.

Saying he was proud of how Obama conducted himself as president, Axelrod said, “I’ve seen honor in the White House, and I believe we’ll see honor there again.”

Axelrod said Democrats need to work harder to offer policies that benefit the American people and craft a message that resonates with voters where they live.

“We need to fight hard to come up with constructive ideas,” he said. Locally and nationally, Democrats must be about “more than meeting the low bar of being better than Donald Trump.”