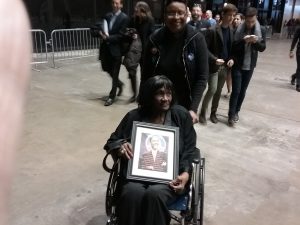 Clutching a photo of President Barack Obama with an overlay of words she had written about his historic presidency, Shahidah Qaiyim beamed when leaving Chicago’s McCormick Place.

Being pushed in a wheelchair by her daughter, Tynnetta, the 81-year-old Chicago playwright smiled,  recounting her opportunity to go backstage before the president’s Farewell Address last week and present him with a copy of the picture and prose.

“I got a kiss from the president. I sure did,” Qaiyim said with pride, “a big old one. Actually, he gave me two or three kisses.”

Using Obama campaign theme of “Yes, We Can” as inspiration, Qaiyim created “Yes, We Did”: 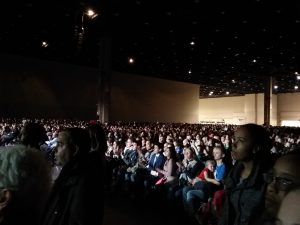 You have truly earned the right

to stand and lead the people

and with you we all will fight.

with a voice loud and clear.

with a voice we all did hear.

to cultivate the earth

and soften up the hearts of man

bringing forth a brand new birth

Though most of the 20,000 people present at the president’s Jan. 10 Farewell Address didn’t get Qaiyim’s chance to thank the president personally for the job he has done, they collectively sent that message loud and clear.

A thunderous ovation of more than two minutes greeted Obama after his introduction and before he was able to get his speech started. Chants of “Yes, we can” and “Four more years” interrupted the president early in his speech.

When the “four more years” chant broke out to drone out a protestor in the crowd, Obama simply smiled, waved his left hand and said, “I can’t do that!”

It was a speech that called for Americans to unite and be engaged in the democratic process.

The president said despite all of our outward differences, the one title we all proudly share is “citizen.”

“Ultimately, that’s what our democracy demands. It needs you,” Obama said. “Not just when there’s an election, not just when your own narrow interest is at stake, but over the full span of a lifetime. 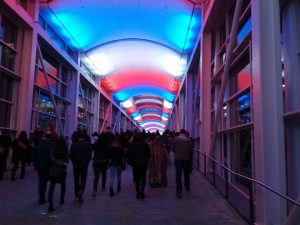 “If you’re tired of arguing with strangers on the Internet, try to talk with one in real life. If something needs fixing, lace up your shoes and do some organizing. If you’re disappointed by your elected officials, grab a clipboard, get some signatures and run for office yourself. Show up. Dive in. Persevere. Sometimes you’ll win. Sometimes you’ll lose. Presuming a reservoir of goodness in others can be a risk and there will be times when the process disappoints you, but for those of us fortunate enough to have been a part of this work, to see it up close, let me tell you, it can energize and inspire; and more often than not, your faith in America — and in Americans — will be confirmed.”

Sanaa Khan drove 2½ hours from Peoria to get to McCormick Place for the historic evening. She and her friend, Aminah Bilal of Glen Ellyn, both the daughters of Pakistani immigrants, wanted to be on hand to share in the moment thanking Obama for his eight years in office. Both said Obama was the first president their parents voted for in a General Election.

“We always felt like we had someone watching out for the Muslim community,” Khan said of Obama.

“It felt like he was always there for us,” Bilal said. “We have fear of what is coming in the future, but President Obama’s legacy will be strong.”