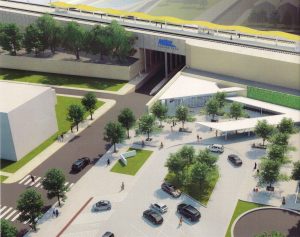 A rendering of the new Auburn Park Metra Station. Metra is currently working on finishing up the station design. (courtesy of Metra)

Metra isn’t expected to start building the new Auburn Park station in the Auburn Gresham neighborhood’s 79th Street corridor until next spring, but area elected officials and transit officials are already celebrating the start of the project with an official groundbreaking.

As previously reported by the Chronicle, this was one of the two Metra stations that were supposed to be built in Chicago a few years ago. But the 2014-17 budget impasse left the project in limbo, and it remained in limbo until April 17 of this year, when the state officially released $2 million in previously allocated funds. The state capital bill, which was passed a month later, kicked in additional $500,000 in state funding.

During the groundbreaking, officials described Auburn Park station as not only a transportation asset, but as a catalyst for economic development. Metra is currently working on finishing up the station design. Construction is expected to start in the spring of 2020, and Metra estimates that it would take approximately 18 months to complete.

Metra’s Rock Island District line runs through Chicago’s South Side, making one stop in Auburn Gresham. The Gresham station is located in the south end of the neighborhood, at 820 W. 87th Street. But the line also had a station further north, near the intersection of 78th Street and Fielding Avenue. According to a Jan. 31, 1971 train schedule, fewer trains stopped there then at Gresham. Charles Saunders, who lived in the neighborhood around that time, remembered it as a “regular train station,” not much different from the Gresham station.

Carlos Nelson, Saunders’ nephew and the executive director of Greater Auburn-Gresham Development Corporation, grew up near the former station. For almost 20 years, he worked to restore it as part of GAGADC’s ongoing efforts to revitalize the surrounding stretch of 79th Street.

Thanks in large part to lobbying by State Sen. Jacquiline Collins (D-Chicago), the state allocated funding to cover much of the planning and construction costs. In August 2012, Metra contracted San Francisco-based T.Y. Lyn International to design the new Auburn Park station. In 2013, Metra approved the station’s construction as part of 2013-17 Capital Projects Program. But when Bruce Rauner became governor and conflicts over budget effectively froze all state funding for new transit projects, work was suspended. By that point, the final station design was 60 percent complete. 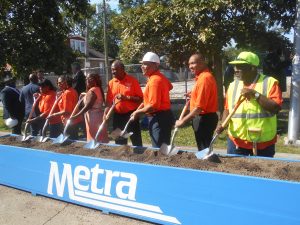 In April, Gov. J.B. Pritzker approved the release of bond funds for the station’s construction. During its April 17 meeting, the Metra Board of Directors officially resumed the project and contracted T.Y. Lyn to not just pick up where it left off, but to add a few features. Whereas before, the plan was to build the stairs and use a ramp to provide accessibility, the new plan calls for an elevator.

The new Auburn Park station will be built slightly south of the original station. According to the rendering provided to the Chronicle, the platform will be located on the portion of the embankment that goes over 79th Street. The currently abandoned industrial building at the nearby southeast corner of 79th Street and Lowe Avenue, which according to Saunders, used to be an appliance parts supplier, will be demolished to make way for a ground entrance, a parking lot and a park-n-ride turnaround where drivers will be able to pick up and drop off passengers. According to Metra documents, the station will include a bike shelter, the embankment bridge will be waterproofed and the entrance will include vendor space.

Collins told the Chronicle that she wanted to ensure that residents and businesses from the area had an opportunity to get involved in the actual construction, saying that there will be “some kind of a hiring agreement,” and that the project would involve a partnership with a certified minority-owned firm.

Under the current schedule, only about half of rush-hour trains and weekend trains stop at the Gresham station. Metra spokesperson Michael Gills said that the transit agency hasn’t settled on what the schedule would be like for Auburn Park station.

The speakers at the groundbreaking thanked Collins for doing her part in making sure the project didn’t completely fall by the wayside, and thanked everybody involved for their patience.

“Let me remind you that 79th Street is the busiest arterial street [in Chicago] outside Madison,” he said. “[The station] is more than just a convenience — it’s a lifeline, and absolutely necessary to many people who live in [my] district, especially for those who reside in low-income communities. [They use public transit] to get to work, to go see a doctor and go to church. This is why the Auburn Park station is so vital and so important.”

Rush noted that he already witnessed an opening of another new Rock Island District Line station within his congressional district — the 35th Street/“Lou” Jones/Bronzeville station near Guaranteed Rate Field — and he was eager to cut a ribbon on another one. 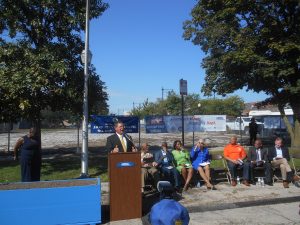 “Our city greatly benefitted from the 35th Street station,” she said. “The station will become a gateway and renew economic possibilities along the 79th Street commercial corridor.”

Ald. David Moore (17th Ward) touted the transit-oriented development the station would bring. While he praised the elected officials and GAGDC, he also credited local residents.

“Because of that, we’re going to have a Metra station on the busiest bus line,” he said.

Metra Executive Director Jim Derwinski said that, while driving to the groundbreaking, he had already seen some signs of revitalization – and he was pleased that the Auburn Park station would help it along.

“I saw this area growing and I knew that this area was going to explode, economically,” he said. “Everywhere we go, we see [Metra] stations as parts of the community. It’s impressive, it’s just impressive.”

Omer Osmand, the acting Illinois Transportation Secretary, praised Pritzker for signing the capital bill, saying that “because of the governor’s leadership, IDOT is back in the business of building transportation” — and that includes the Auburn Park station.

“This Metra station will not only strengthen the already vibrant area, but it will unleash the potential by giving residents another option to get where they want to go,” he said. “I look forward to coming back soon to cut the ribbon on the new Auburn Park station.”

Nelson said that, after 20 years of lobbying for the new station, he was proud to be there — and proud of the fact that his family members were there to witness this milestone.

“This is a really exciting and really personal for me,” he said. “There’s still so much work to be done. And you can see that 79th street is still [lacking] in businesses. Let’s put our hardhats on, let’s get shovels and let’s get to work.”

While the mood was largely celebratory, Saunders said he had reservations.

“The truth of the matter is [that] I have mixed feelings about it,” he said. “The plans for the community have nothing to do with people that live here now. The folks who are living her are probably going to get pushed out.”

Saunders said that, while he supported GAGDC’s community-centric approach, he was worried that it might not be enough to overcome greater market forces.

Collins said she didn’t believe that Auburn Gresham was in any danger of gentrification, because the legacy of segregation and disinvestment was too strong.

“The people in the community, they are hungry for some kind of development,” she said. “Community development isn’t synonymous with gentrification.”

In fact, Collins said, given how hard-hit Auburn-Gresham was by foreclosure crisis, she wanted more people to move in and rehab the currently abandoned homes.

“We hope that people who left [the neighborhood] come back to the community and purchase some of those properties.”