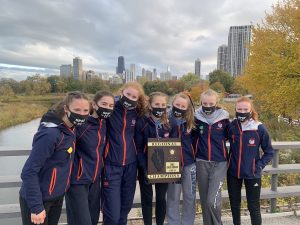 All season long, Oak Park and River Forest High School junior Josephine Welin has grown increasingly accustomed to running by herself. When you are one of the top cross-country runners in Illinois, it comes with the territory.

And now, after her performance Saturday, Oct. 24, at the Lincoln Park Class 3A Regional cross-country race, she is all alone, again — this time in the Huskies’ record book. On a cool afternoon that provided favorable conditions, Welin blazed to a 16-minute, 55-second finish, a dozen seconds faster than the school mark established by Mary Blankemeier in 2013.

Welin’s historic achievement spearheaded a dominant Huskie day, with all six OPRF runners placing in the top 11 in the field of 65 runners. As a result, Oak Park and River Forest captured its third consecutive regional title, out of nine schools in the competition, and advanced to the sectional round Oct. 31.

Adding a special dimension to the day was that it represented the first opportunity for family members to cheer on the Huskies in person. Because it was not a West Suburban Conference meet, COVID-19 restrictions that the conference had imposed throughout the season were not in effect. 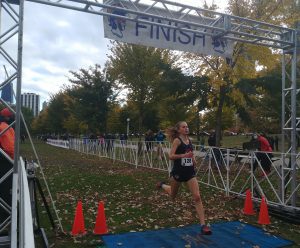 OPRF junior Josephine Welin crosses the finish line all alone in first at the Lincoln Park Class 3A Regional meet Saturday, Oct. 24. Welin’s time of 16:55 was the fastest across all 12 regional races throughout Illinois, and is the third-fastest in the state for 2020. (Inside Edge PR photo)

After the race, in a video interview with MileSplit Illinois, Welin said the course layout, just south of the Lincoln Park Zoo, was “easier and fun to run,” compared to last year’s design at the same Chicago park.

“It’s one of the only 3-mile courses I’ve been able to run on this year, so I wanted to run as fast as I could,” Welin told MileSplit Illinois. “… it feels good to run that fast. I guess it just proves to me that I can keep up with the top girls (in the state).”

Indeed, her time was the fastest of all runners throughout the 12 Regionals on Saturday — and the third-fastest all season among Illinois high school competitors. As OPRF coach Ashley Raymond put it, “Josephine was ready to seize the opportunity.”

“Under normal times we would run more conservative at regionals, but this year is different,” Raymond said. “With less opportunities to run 3-mile courses and COVID-19 cases on the rise, we can’t run like we have another day.”

In addition to shattering Blankemeier’s record, Welin set the Lincoln Park course record and defended her 2019 regional victory, which came during a subdued, somber event: Chicago Public School athletes could not participate due to the CPS teachers’ strike at the time.

The field was split into two heats as an accommodation to COVID-19 social-distancing concerns. In preparing for the race, the Huskies trained with a mindset to have “new ways they could determine how they were doing in the race besides overall place and position on the team,” Raymond noted.

“I think this preparation really helped Avery run for fourth place in the second wave of runners,” Raymond added. “Maggie Rose and Maja showed a lot of heart. They ran stride for stride until the final 100 meters, and I am really proud of their effort all the way to the finish line.”

OPRF’s 22 points — tallied by adding which position its top five runners finished — easily placed it ahead of the rest of the pack. Lane Tech, with 64 points, finished second, followed by Jones College Prep, with 70 points. Those two schools, along with Lincoln Park (130) and Niles West (135), joined OPRF in qualifying for the sectional race.

The sectional will be held in the same spot, a familiarity that should give the Huskies an edge, said Raymond.

“The team will be able to reflect on how to improve for next week,” she added. “They can think about tangents they missed, identify the places where they ‘checked out’ of the race, and have a better sense of when to start their kick.”

The Huskies should be bolstered by the expected return from injury of seniors Nora Wollen, who has not been able to compete all season, and Parker Hulen, who was a last-minute scratch on Saturday as a precautionary measure.

At the state finals last year, in earning All-State laurels along with Welin, Wollen came within a second of breaking Blankemeier’s school record. Since her sophomore year, Hulen has consistently been a top-five runner for the Huskies.

In the sectional, the goal is to finish in the top three and qualify as a club for an independent state cross-country series the first weekend of November.

The Huskies are ranked seventh in the state. Its previous top finish at the state finals is 10th, in 1984 and two years ago. Last year’s squad placed 13th at state.

Matt Baron is the father of an OPRF girls cross-country runner.