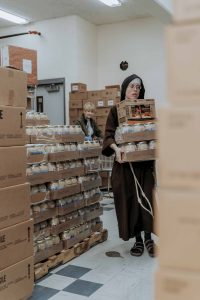 Sister Stephanie Baliga carries food in the Mission of Our Lady of the Angels food pantry. Sister Stephanie, a former cross-country and track runner in college, also leads a fundraising team for the mission of runners in the Chicago Marathon. (Fleet Feet photo)

These days, she is pretty much wearing just one — pantry worker.

She and the 10 other individuals who comprise the Mission of Our Lady of the Angels spend most of their time sorting food, stocking shelves and putting together food bags for struggling residents in Chicago’s West Humboldt Park and Austin neighborhoods.

“We don’t have volunteers right now so it’s a lot of stacking,” Sister Stephanie said. “The food pantry is not my full-time job, but it is now. God provides. If he wants me to be a full-time pantry worker, then that’s what I’ll do.”

Due to business shutdowns during the coronavirus pandemic, the West Humble Park and Austin areas have been hard hit. Sister Stephanie said many people in the area have lost their jobs.

“They are disproportionately hourly workers,” she said of workers in the two communities. “A lot of them are in food service or work cleaning hotels and those things aren’t happening right now.”

On a typical Tuesday, the food pantry at Mission of Our Lady of the Angels serves about 225 area families. On April 7, the pantry served 555 families. That included 180 families who had food delivered to their door, thanks to the mission’s partnership with the Chicago Police Department.

“We had a lot of people and a lot of food,” Sister Stephanie said of the April 7 food distribution. “We are grateful to be able to help.”

She said donations are continuing to pour in, especially from restaurants.

“They still have supplies coming and they are not doing anything with all that food,” Sister Stephanie said. “Stores also have a lot of extra stuff.” 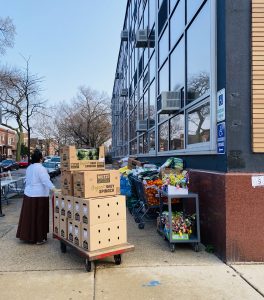 Food is brought out for distribution at the food pantry at the Mission of Our Lady of the Angels in Chicago. (Provided photo)

Individuals coming to the pantry are given about two weeks of food. Normally, they can go into the pantry and pick what they want, but with concerns about spreading the coronavirus all the food is pre-bagged and set on tables outside the pantry.

“People are more limited. They normally have more options,” Sister Stephanie said, “but (the pre-bagging of food) is a way to still distribute it.”

She said that the Mission of Our Lady of the Angels’ pantry continues to provide weekly service while some area pantries have shut down because they are staffed by older residents who have been staying on lockdown during the pandemic.
Normally, a part-time teacher at St. Sylvester Elementary School in Chicago’s Logan Square neighborhood, Sister Stephanie is also the business administrator and development director of the mission, including overseeing the pantry’s expansion effort.

Sister Stephanie said she is at peace with the more low-key role she has right now as the mission’s focus is solely on serving those in the surrounding community.

“Life is less stressful than it normally is,” the Franciscan sister of 10 years said. “Everyone is concerned about the virus so the mission just producing food is low stress for me. I normally have more going on than this. I’m like ‘I get to chill, pack food in the back? I can do that.’ There is a different kind of stress though, finding tangible ways to help. I feel blessed to be able to help.” 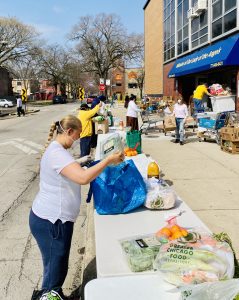 Food is sorted at the Mission of Our Lady of the Angels, which serves struggling residents in Chicago’s West Humboldt Park and Austin neighborhoods. (Provided photo)

The graduate of Auburn High School in Rockford said it was when she was at the University of Illinois that she had a powerful conversion that led to her being a Franciscan sister at the mission.

Suffering a serious foot injury during track season her sophomore year, she struggled to find her place.

The Mission at Our Lady of the Angels provides food from 8:30-10:30 a.m. every Tuesday. Everyone in Cook County who is struggling and needs helps is invited to show up, Sister Stephanie said.

“We will cap out somewhere, but as long as you get in line before 10:30 a.m., you will get some type of food from our facility,” Sister Stephanie said.

She said the expanded pantry can better handle the larger supplies of food needed to feed families during this pandemic.

“We did not have this expanded facility a year ago. It’s how life works,” Sister Stephanie said. “If you need help, keep coming. People are not going to be turned away.”