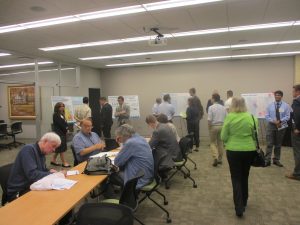 Riders and residents get a look at the proposed North Shore Coordination Plan during the Sept. 18 public meeting. (Photo by Igor Studenkov/for Chronicle Media)

Pace and CTA unveiled a proposal that would fundamentally change the bus services throughout Northern Cook County.

Known as the North Shore Coordination Plan, the proposal set out to change the service so that the two systems serve the area as efficiently as possible, coordinating with each other and trying to avoid service overlap.

CTA routes 54A and 205, as well as  Pace Routes 210 and 423, would be eliminated. Three new routes — temporarily labeled Route A, B and C — which would at least partially make up for some of the resulting lost service. Many other routes would be changed to some extent or another. In some cases, new routes would at least partially replace some of what was eliminated. And while some route segments would get more service, other segments would see their service reduced.

Throughout the Sept. 18 meeting, which was held at Skokie Public Library, officials emphasized that the proposal wasn’t final, and that they were open to making some changes based on what they heard.

CTA’s Route 54A currently travels between Montrose Blue Line ‘L’ station and Old Orchard Mall during rush hour, primarily traveling along a road that’s known as Cicero Avenue in Chicago and Skokie Boulevard in the northern suburbs. While the plan calls for the route to be eliminated, it isn’t doing away with service in that corridor altogether. Most of it would be replaced with Route C.

The new route would start at Jefferson Park Transit Center, follow the same path along Foster Avenue as CTA Route 92 until it reaches Edens Expressway, travel as an express along the highway until it reaches Touhy Avenue, than continue north along Skokie Boulevard along the same path as Route 54A. It would still be a rush-hour service, and the level of service would remain the same.

Ryan Ruehte, the project manager for the proposal, said that the change was designed to reflect ridership patterns.

“54A is one of CTA’s lowest-ridership routes in the study area,” he said. “It’s not an efficient use of their resource the way it’s currently designed. The parts of 54A that do well can be better served with Route 215 and Route C.”

CTA Route 205 would be eliminated, but the service would also be replaced with portions of reconfigured Pace Routes 208 and 213. While Route 205 is weekday-only, Route 213 currently runs Monday-Saturday, and Route 208 runs all week.

Route 208 currently links together a number of northern and northwestern suburbs, primarily traveling along Golf Road between Evanston’s Davis Street ‘L’/Metra station and Schaumburg’s Northwest Transportation Center. It currently gets off Golf Road in Skokie, turning south on Skokie Boulevard and then heading east along Church Street the rest of the way. Under the proposal, it would instead follow the same path as Route 205, continuing north on Golf Road and Emerson Street until Dodge Avenue, where it would turn south on Dodge Avenue until it reaches Church Street, where it would continue the same way as before.

Pace Route 210 would be the only route that would be eliminated completely, with almost no replacement. It is one of the least grid-like route in the study area, linking together Lincolnwood Town Hall shopping center and Northshore Glenbrook Hospital. It heads south on McCormick Boulevard before turning northwest on Lincoln Avenue until it turns north Skokie Boulevard, then west on Oakton Street, then north along Lincoln Avenue, traveling through Skokie and downtown Morton Grove before turning west on Dempster Street. It then turns north on Waukegan Road, traveling through the village of Golf until it turns west on Glenview Road in downtown Glenview. It turns north on Greenwood Road, then west on Lake Avenue before arriving at the hospital.

Ruehte said that, as with Route 54A, it was a simple matter of ridership numbers.

“220 is one of the lowest ridership routes in our study area,” he said. “its ridership has been declining for decades, and it’s one of the least productive [routes]. We’re putting a lot of money to serve a small number of people, and that’s not an efficient use of our resources.”

The Pace ridership statistics compiled by Regional Transportation Authority indicate that is ridership dropped consistently between 2000-08. Since then, it has shifted back and forth within the 300-400 rider range, never rising above that average.

Route 213 stats at downtown Evanston’s Davis Street ‘L’/Metra station and continues north along Green Bay Road until it reaches Lake Cook Road. At that point, the route splits up, with half of the buses going to the Northbrook Court mall and the other half going toward Highland Park Union Pacific North Metra Line station. Under the proposal, the Highland Park portion would be removed, and it would be extended south to Howard Street to make up for the removal of the Chicago Avenue portion of Route 205.

Route 215 would see more significant change. It currently travels between Howard Street ‘L’ station and Old Orchard Mall, moving along Howard Street before turning north on Crawford Avenue, the turning west on Golf Road until it reaches Old Orchard. The proposal would move the starting point to Jefferson Park Transit Center. From there, it would follow the same path as Route C until it reaches Cicero Avenue, continue north along the segment currently served by CTA route 54A, then turn east on Peterson Avenue, then turn north along Pulaski Road until it becomes Crawford Avenue, where the route continues the same as before.

Routes 225 and 226 have historically been linked together. They follow the same path between Jefferson Park Transit Terminal and Fargo, traveling primarily along the street known as Central Avenue, Carpenter Road and Niles Center Road until it reaches Fargo Avenue. Route 225 is a rush-hour service geared toward Howard Street industrial districts in Skokie and Niles, while Route 226 is more of a regular route that continue north to Oakton Street, turns west on Oakton, turns northwest on Busse Highway and makes a loop at Union Pacific Northwest Metra Line’s Des Plaines station before returning to Oakton Street, continuing west until it reaches Hamilton Road.

The proposal would change that arrangement in several fundamental ways. Route 226 would continue east along Oakton Street until it reaches Crawford Avenue, where it turns south toward Howard Street and continues east until it reaches Howard Red/Purple/Yellow line ‘L’ station, filling in for Route 215. Meanwhile, Route 225 would now turn west on Touhy Avenue, then north along Central Avenue until it reaches Howard Street and keep going the same way as before. To make up for the loss of Pace service south of Touhy Avenue, Pace would turn it from rush hour to all-day service.

Some of Route 226 trips would still not go west of Harlem avenue, but the transition between the two routes would be eliminated.

Route 422 would follow the same path as before until it reaches the intersection of Harlem Avenue and Glenview Road. At that point, it would follow the same path as Route 423 until it reaches North Glenview Metra station, where it would now stop. Unlike Route 423, it would stop directly at the station rather than within walking distance. The Waukegan Road portion of the route would not be replaced, but the section between Willow Road/Waukegan Road intersection and Northbrook Court would be replaced by a portion of the new route temporarily designated Route A, which would also stop directly at North Glenview station, allowing transfers.

Route 423 would be eliminated, but the Chicago-to-Glenview portion, which mostly travels along Harlem Avenue, would be replaced by what is temporarily labeled as Route B. The one difference is that, between traveling along Harlem Avenue all the way to Glenview, it would turn toward Waukgean Road on Dempster, following the same path as Morton Grove-Glenview portion of Route 210. The portion of the route between Patriot Boulevard and Linden Purlple Line ‘L’ station would be replaced by Route A.

Ruehte said that the key issue with Route 423 is that, while most people use Chicago to Glenview and Glenview-Wilmette portions, few people travel beyond those segments.

Several of the Pace routes currently make special trips designed to drop off and pick off students at area high schools. There are also special trips — such as Route 422’s special night shift service to USP’s Northbrook facility — which don’t necessarily match the regular routes. Ruehte said that those services would be maintained, one way or another— even if they don’t necessarily have the same route numbers. For example, school service currently provided by Route 423 would most likely be taken over by Route 422.

According to the timeline on Pace’s website, the final version of the plan is expected to be prepared by 2018, with the service changes taking effect later that year.

The residents that attended the Sept. 18 meeting and spoke to the Chronicle said that they were pleased with the plan. Din Dreffein, of Park Ridge, said that, as he saw it, the problem with the current Pace system is that it still had some segments that trace their origins to municipal bus systems that were more destination-based. But times have changed.

“You have transfer points where there’s nobody transferring,” he said. “Downtown Glenview is a great example of a hub where nobody is really transferring.”

Dreffein felt that the proposed change would do a better job of reflecting current rider needs.

“I think it’s a great proposal,” he said. “There may be gaps, and it’s why they’re having this meeting, but overall, they addressed the big picture — and that’s a positive thing.”

Daniel Joseph, of Evanston, is a retired CTA bus driver who has experience driving the bus in Evanston. He said that, for the most part, he was pleased with the proposal.

“Overall, it’s very good,” Joseph said. “I look at thing they overlooked, such as whether they’re going to have Sunday service [on Route 213].  It’s very good. They streamlined things, a little.”