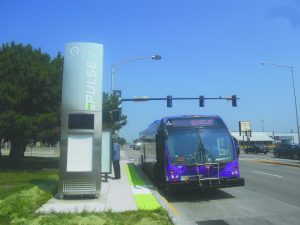 The line is meant to provide faster, more train-line service. It has only 10 stops, and each stop is more station-like in design, with raised platform, real-time bus arrival displays and large obelisk-like station markers. The buses have the distinct purple wrapping to make them stand out from the regular buses. And while the buses don’t have their own lanes, they will benefit from transit signal priority technology, which can adjust traffic signal intervals to speed up service under certain circumstances.

Route 270, which currently serves the corridor, will still run, albeit less frequently. This will be especially noticeable for the trips that continue past Golf MIll Shopping Center, toward Glenbrook Hospital. Without Pulse Milwaukee to fill in the gaps, the number of rush hour and evening trips will be reduced.

Route 270 is currently the sixth busiest Pace route in the system, clocking at 67,713 riders a month in March 2019, the most recent month for which the information is available. The route traces its roots to a streetcar route that helped encourage development in the Jefferson Park, Gladstone Park and Norwood Park neighborhoods, as well as Niles further northwest.

Today, most buses travel between Jefferson Park Transit Center and Golf Mill Shopping Center every 10-15 minutes during rush hour, every 20 minutes during off-peak hours and every 30-45 minutes during events. Roughly a third of those buses continue north on Milwaukee Avenue, making a detour to serve Crestwood Apartments and other residential areas in unincorporated Maine and Northfield townships before returning to Milwaukee Avenue, then turning east on Lake Avenue to serve Glenbrook Hospital and surrounding portions of Glenview. Those trips run once every 30-40 minutes during rush hour and once every hour the rest of the time. 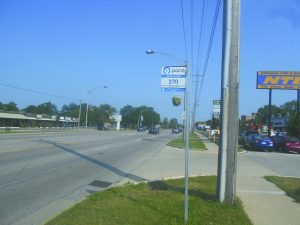 The Route 270 bus will continue to stop at regular bus stops like this once Pulse Milwaukee line launches. (Photo by Igor Studenkov/for Chronicle Media)

Pace Route 272 travels along Milwaukee Avenue north of Golf Mill as well and continues north past Lake Avenue, providing additional service along the avenue itself and adding more options for those wishing to get to and from Lake Avenue.

With ART corridors, the idea was to limit the stops to major intersections and bus stops that get the most ridership. Milwaukee Pulse line will stop at Central, Austin and Devon avenues. In Niles, it will stop at Touhy Avenue, the three-way intersection of Howard Street and Milwaukee and Harlem avenues, Oakton Street, Main Street and Dempster Street. Each of the new stations will have a passenger shelter with heat lamps, the real-time bus arrival information display, bike racks, map of area’s train lines and bus routes, and raised platform with tactile edges to ease boarding. As Pace Executive Director Rocky Donahue explained to reporters, while the buses may need to lower the ramps to help people with wheelchairs and mobility devices get on, the buses would no longer have to “kneel” to bring the door closer to the ground — which, he said, actually slowed the bus down more than lowering and retracting the ramp.

Pace spokesperson Maggie Daly Skogsbakken explained that the municipalities and local organizations can customize the station shelters, railings, bike racks, trash cans and landscaping elements. The Golf Mill station shelters, for example, sport the shopping center’s logo. She added that, because the advertising panels inside the shelters are controlled directly Pace, the transit agency is open to using them to advertise local events. And the stations’ pavement can heat up to melt snow.

From the get-go, the plan was for regular routes to use the stations as well. Daly Skogsbakken clarified that regular stops near the stations at Oakton, Touhy and Main would be removed.

The one stop that won’t see any changes is Jefferson Park Transit Center, which recently went through a separate renovation project. Daly Skogsbakken said that Chicago Transit Authority “wanted to have their own design,” so the boarding platform for Route 270 and Pulse Milwaukee isn’t different from other buses. But she said that CTA will include “Pulse branding” on the signage, and she noted that the terminal already has some Pulse-like features — two passengers shelters with heat lamps and real-time arrival displays.

Another major component of Pulse Milwaukee will be the buses. As previously reported by the Chronicle, the vehicles arrived around two years ago. They have been regularly used on several routes, including Route 270, so  riders are already familiar with them. But once the Pulse service starts, they will get district purple wrap to help set them apart. In addition to on-board Wi-Fi, which, as previously reported by the Chronicle, has become a standard feature on most Pace routes, the buses come with UBS-based chargers located under the seats and  interior TV displays that will be used to show information and, eventually, advertising. 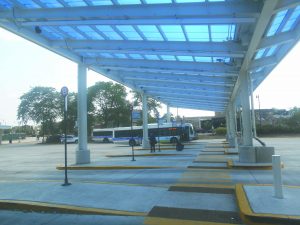 The Route 270 platform at the recently renovated Jefferson Park Transit Center doesn’t look any different from any other platforms, but Pace officials say that Pulse branding will eventually be added. (Photo by Igor Studenkov/for Chronicle Media)

The buses will benefit from Transit Signal Priority. As Donahue explained, it will work with traffic lights’ computers, signaling it to either delay or speed up the traffic light change. He noted that it wouldn’t necessarily kick in all the time, since the programs that run the traffic lights would consider other factors, such as traffic jams

Daly Skogsbakken noted that, while all Niles Pulse Milwaukee stations will be ready to go, the Chicago stations won’t be ready until November, which, she said, will affect travel times.

Pace always intended to keep Route 270, albeit on a reduced schedule, with most buses running to and from Glenbrook Hospital. The route will now run once an hour, which does mean that rush hour service north of Golf Mill will be reduced.

Under the current schedule, the last Jefferson Park-Glenbrook trips end at 7:30-8 p.m., while the new schedule will end by 10 p.m. But the trade-off is that several early morning trips in either direction will be cut. Meanwhile, on Saturdays, the morning schedule will stay similar, but buses won’t go past Golf Mill after 6 p.m., ending Jefferson Park-Glenbrook trips one hour earlier.

“For Pulse, when we can’t compete with Ubers, Lyfts, people won’t ride [our buses],”

he said. “We believe that ridership is going to grow about 25 percent.”

Daly Skogsbakken said that Pace is doing an extensive outreach. The transit agency’s employees will be on hand to direct riders and hand out new schedules and brochures.

Pace currently expects to launch the next Pulse line — the Pulse Dempster line — in early 2022.