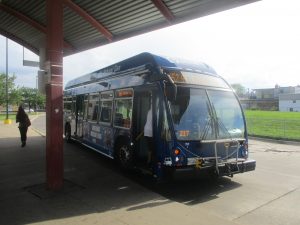 Pace Route 352, which serves Halsted Street corridor in Chicago’s Far South Side and south suburbs, stands out for several reasons.

It is the only Pace route that currently operates 24/7. It is the busiest route in the system — as per the most recently available statistics, as of November 2017, it gets 144,651 boardings — almost 50,000 more boardings than the second-busiest route, Route 290. And, in a few years, it may become the first Arterial Rapid Transit bus corridor in southern suburbs.

The concept is similar to Bus Rapid Transit in that it features more station-style stops with raised platforms that are spaced further apart than regular bus stops. But unlike BRT, ART doesn’t feature bus-only lanes — instead, they simply get traffic signal priority under certain conditions. Pace is currently building its first corridor along the portion of Milwaukee Avenue in northwest Chicago and the suburban village of Niles and finalizing the details of the Dempster Street corridor farther north.

In the summer of 2017, Pace and Chicago Transit Authority launched the South Halsted Corridor Enhanced Bus Feasibility and Planning Study — which, among other things, is looking into the feasibility of adding an ART corridor along the busiest portion of Route 352. But Pace spokesperson Maggie Daly Skogsbakken emphasized that it may not actually be the third corridor. There are other corridors that get short-term priority, and the exact order of in which they are put in place will depend on study results and funding.

An average of half to a third of Route 352 buses keep going south, serving South Holland, East Hazel Crest, Homewood and Chicago Heights. Unlike the Harvey-95th/Dan Ryan portion of the route, these buses don’t run during the night, but they still start early in the morning and end in 1 a.m.

According to the Pace website, the ART service concept goes back to the 2001 “Vision 2000” study, which, among other things, identified 24 major transit corridors that could benefit from faster service. The 2009 Arterial Rapid Transit study sorted those corridors based on priority. Later, Pace would officially brand ART corridors as Pulse corridors. 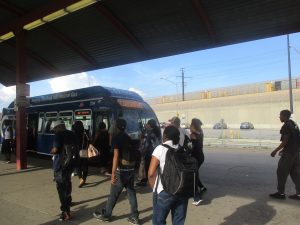 Passengers prepare to board southbound Route 352 bus to Chicago Heights at Harvey Transportation Center. While the Pulse Halsted wouldn’t include that part of Route 352, it is part of the next phase. (Photo by Igor Studenkov/for Chronicle Media)

While some specific elements differed, there are certain fundamentals. The bus stops are spaced further apart, usually at major intersections, transit hubs and other destinations. Each stop is more elaborate than an average bus stop — it has a raised, wheelchair-accessible platform, a live bus arrival information display and a bike rack.

The Pulse corridors will also use special buses. While they are similar to regular buses in many respects, they come with USB chargers, interior informational displays and larger destination signs. Because the vehicles were delivered earlier than Pace expected, riders can already see them in action — usually, but not always, on the future Pulse corridors. They are currently painted in Pace’s regular blue-with-white-lettering color scheme, but once Pulse service launches, they will be painted the service’s distinct purple, green and white color scheme.

The Pulse lines won’t replace the regular Pace routes completely — they will still keep running, but their schedules will be reduced.

The Pulse Milwaukee corridor, which would follow the portion of Route 270 between Chicago’s Jefferson Park Transit Center and the Village of Niles’ Golf Mill Shopping Center, got the first priority. The Pulse Dempster corridor, which would follow Route 250, got the second priority. Pace’s Pulse service website currently lists Pulse Halsted as the third “active project,” but doesn’t give any information beyond that.

In 2017, Pace officials indicated to the Chronicle that they wanted to have parity in terms of which projects get priority. Having already started the process on two corridors and north and northwest suburbs, they wanted to turn their attention to other parts of Chicago area.

Pace and CTA launched the South Halsted Corridor Enhanced Bus Feasibility and Planning Study July 12, 2017, to look at ways to improve bus service along Halsted Street between 79th Street and Harvey Transportation Center. According to a CTA press release issued at the time, that included “possible modifications such as improved service coordination, bus stop spacing optimization, enhanced boarding areas, and elements of Bus Rapid Transit such as dedicated bus lanes and the installation of traffic signals and queue jumps that prioritize buses at busy intersections,” Daly Skogsbakken told the Chronicle that the study will “lay the foundation” for Pulse Halsted line.

She explained that current plans call for the Pulse Halsted line to run on the 24-hour portion of Route 352, but extending the ART service for the entire route is one of the mid-term projects that would kick off once all the short-term corridors are up and running.

Because the process is still in the early stages, Pace doesn’t have any information on how many stations it would have, where the stations would be located and when it would run.

Daly Skogsbakken said South Halsted planning study is scheduled to conclude in the first quarter of 2019, though she added that it would probably take longer. 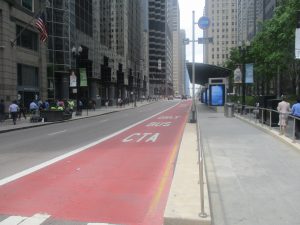 “[The study] may last longer depending on the public outreach process and other work to address issues that are uncovered by the study process,” she said. “Similar studies have taken anywhere from a year to two years to complete, so we expect this study to conclude sometime in early to mid-2019.”

Daly Skogsbakken emphasized, whenever the study may conclude, Pulse Halsted may not necessarily be the third line to actually get built.

“Halsted is one of the seven near-term priority Pulse corridors, but the exact implementation order may be impacted by study results and funding availability,” she said. “I can’t give an implementation date for the Halsted Line, but it is not set to launch anytime soon. I may have a better idea of a timeline when the study is complete.”

Other routes identified as short-term priorities in ART study include the section of Route 381 that follows 95th Street between 95th/Dan Ryan station and Harlem Avenue, the corridor currently served by Route 322, which primarily travels along Cermak Road between 54th/Cermak Pink Line “L” station and Yorktown Center shopping, and the portion of Route 301 between Forest Park Blue Line “L” station and Oakbrook Terrace shopping mall. The plan also calls for a route along the section of Harlem Avenue between North Avenue and 95th Street — which, unlike the other short-term priority corridors, isn’t currently served by a single route along its entire length.

The Chronicle reached out to the cities and villages currently served by Route 352, but none of them responded by deadline. This newspaper also reached out to Chicago Southland Convention & Visitors Bureau, a marketing organization that promotes tourism, events and activities throughout southern suburbs. Loren Petrakis-Mueller, the organization’s Communications Manager, responded that having ART service along the entire route would definitely benefit the region.

“Rapid Transit bus service could enhance ease of access to the municipalities and places like Prairie State College, downtown Homewood, Glenwood, Thornton and Chicago Heights area for local commuters as well as day-trippers,” she said.

For now, Pace is working on the first two Pulse lines. For the Pulse Dempster line, the transit agency is finalizing station locations and environmental impact study. Pace currently expects to start construction in 2019 and finish it in 2020. 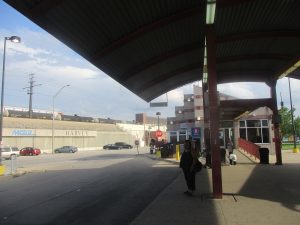 For the Pulse Milwaukee, construction started on Nov. 3, 2017, with the goal of launching the service sometime in the second half of 2018. The construction along the Niles portion is proceeding, but Pace ran into unexpected delays on the Chicago portion. Getting the necessary permits, Daly Skogsbakken explained, has taken longer than expected. As the result, the launch is expected to be delayed.

“The launch date [for Pulse Milwaukee] is permit-dependent at this point,” she explained. “Construction is underway in Niles, but the timeline for construction in Chicago is still unknown due to delays associated with permitting. We will provide an update as soon as we have permits in hand.”

“This is the first Pulse implementation, so we’re disappointed by the delays, but not necessarily surprised,” she said. “It’s difficult to predict process times as they vary by municipality, roadway authority, and project and often take longer on new projects. We expect a quicker process with future lines.”