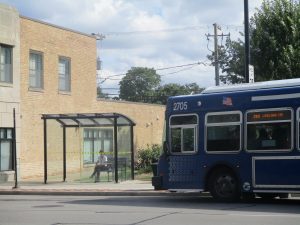 Route 210 bus, which follows a flag stop system, pulls up to a stop at the southeast corner of the intersection of Oakton Street and Civic Center Drive in Skokie

Since the mid-2000s, Pace suburban bus transit agency has been quietly and gradually changing the way its buses pick up and drop off passengers.

Even before Pace was created in 1983, most bus routes in Chicago suburbs used what Pace spokesperson Maggie Daly Skogsbakken described as the flag-stop system. Riders could flag down a bus at any intersection, and they could ask the drivers to drop them off at the nearest intersection by pulling a cord.

Since the mid-2000s, Pace has been switching more and more routes to a posted stop system, where the buses only pick up and drop off passengers at bus stops.

While most of the routes still follow the old system, Pace plans to gradually make all routes posted-stop only. As Daly Skogsbakken explained, this is done to speed up service and improve amenities. And while it isn’t clear how long the process will take, she said that Pace expects the majority of the routes to be posted-stop by 2020.

In Chicagoland suburbs, most buses were originally operated by private companies. From 1950s-1970s, many of those companies went bankrupt, and municipalities formed transit districts to keep service going. When Northeast Illinois Regional Transportation Authority was formed in 1974, one of the things it was charged with was supporting.

In 1983, Pace was created as RTA’s suburban bus transit division. Over the next two decades, it gradually absorbed most suburban bus systems in the Chicagoland six-county area and created a number of new routes, some of which endure to this day.

Daly Skogsbakken told the Chronicle that Pace inherited the flag-stop system from the systems it took over. While she noted that, even in the private ownership days, there were some express routes that followed the posted-stop system, the majority of the routes were flag stop.

That started to change in June 2009, when Pace made two of its south suburban routes — Route 350 and Route 352. Route 350 primarily runs along Sibley Boulevard, serving Calumet City, South Holland and Harvey, and it is one of only two Pace routes to serve Hammond, Ind.

Route 352 runs between Red Line’s 95th/Dan Ryan L station and downtown Chicago Heights, primarily traveling along Halsted Street, and it is currently the only Pace route to operate 24 hours a day. According to statistics compiled by RTA, at the time, Route 352 was the busiest route in the system — something that remains true as of May 2017.

Daly Skogsbakken said there were a number of reasons for putting the new systems in place. It would make the service faster, more efficient and more reliable, improve traffic flow, ensure that riders get on where it’s safe to board. The rider feedback also played a role, she said.

“Additionally, the [posted-stop only] project addresses feedback we’ve received from our customers expressing dissatisfaction as it relates to amenities,” Daly Skogsbakken said. “PSO allows us to provide a safe, well-marked boarding areas and, hopefully, more shelters in the future.”

There is also the matter of text message based bus arrival information service. Launched in Spring 2015, it allows riders to look up how long it is until the bus is coming by texting “Pace” followed by a stop number. Since then, Pace has been working to add the bus stop number to every sign. Converting a route to posted-stop only, Daly Skogsbakken said, lets the agency kill two birds with one stone.

“We’ve seen a huge increase in the usage of that text messaging service in the past year,” she said. 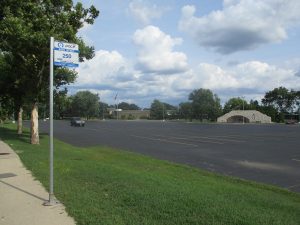 After the conversion to posted stop, Pace made sure Route 250 had a clearly bus stop once every 2-3 blocks.

Since June 2009, Pace has been making more and more routes posted-stop only. The system’s busier routes got priority, though the recent months also saw some of the less busy routes — such as Route 209, which was converted on June 12, 2017.

“[The conversion] is the goal for our regular and premium fixed-route services,” Daly Skogsbakken said. “The service benefits and cost savings realized through posted-stops operations, along with the reasons noted [earlier in the interview], are driving this project. “

It should be noted that the posted-stop only system doesn’t automatically get applied to new routes. As previously reported by the Chronicle, on Dec. 19, 2016, Pace launched a major service expansion in the northwest suburbs near Jane Addams Memorial Expressway portion of I-90, creating several local and express routes. While all express routes were posted-stop only, newly created local routes 604, 608 and 611 were not.

Daly Skogsbakken did note that the conversion wasn’t a formal policy per se.

“While our board of directors never voted on this as a “policy,” the project was presented to them. the board has voted on two contracts related to the PSO project — one to hire engineering help, and another to hire sign installation help,” she said.

The conversion tends to be accompanied by Pace, adding more bus stop signs. Daly Skogsbakken said that the agency doesn’t see it as adding more stops.

“In most cases, what we’re doing is more like formalizing, or designating, existing stops that may or may not have a bus stop sign installed,” she said. “In the past, we had some bus stop signs but ‘bus stops’ — if defined as the place where you have to wait for the bus — didn’t really exist. We had signs, but riders didn’t have to wait there.”

Daly Skogsbakken said that the locations of the stop signs are considered carefully.

“Pace has developed a process for converting routes from flag stop to posted-stop-only operation which we use for making the changes,” she said. “This includes robust stakeholder outreach to elected officials and riders and conducting extensive fieldwork [and] site visits of each bus stop location to determine if it should be retained, removed, or relocated.”

Daly Skogsbakken also noted that there are cases where bus stops are marked on schedules or are labeled on Google Maps, but they don’t have signs.

“Going forward, any stop shown in Google Maps or the Pace published stops list brochure for a route will have an actual sign installed for it,” she said.

And even when signs are added, buses tend to make fewer stops than they do under a flag-stop policy, so they tend to travel faster, Daly Skogsbakken said.

According to Pace’s Fiscal Year 2017 budget, Pace currently has a total 212 fixed routes, 42 of which are feeder routes and 15 of which are shuttles. Daly Skogsbakken said she wasn’t sure how long it would take to convert all of them.

“I don’t want to predict when the project will be completed because there are some irregular routes, like shuttles, that may need extra time and planning to convert,” she said. “That said, to date, there are 65 routes converted and we expect to have another 100 converted within the next two years.”

If the plan is successful, 165 out of 212 Pace routes would be posted-stop only, which would account for the majority of the system.