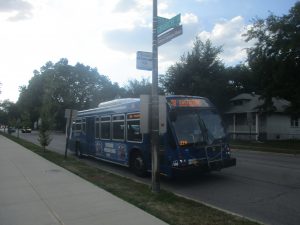 On Aug. 13, Chicago Transit Authority and Pace bus routes serving much of North Shore saw the most significant service overhaul in a decade. But the changes won’t be quite the same as what the two transit agencies originally proposed.

The changes represent the first phase of North Shore Coordination Plan, which seeks to improve bus service throughout the northern suburbs by rearranging routes to better meet ridership demand and reducing service overlaps between the two agencies. Under Phase 1, CTA’s Route 205 will be discontinued, but Pace Routes 208 and 213 were changed to fill in most of the resulting gaps. The Route 213 will also see service frequency changes, and the Lake County portion of the route will be changed as well.

After two area high schools — Evanston Township High School and New Trier High School — expressed concerns about how the changes would affect their students, CTA and Pace amended the plan to scale back some of the service reductions. New Trier officials told the Chronicle that they’ve been happy with Pace’s responsiveness, and City of Evanston officials said that, overall, the changes benefitted the riders.

Both ETHS and New Trier are among the many high schools throughout Chicago suburbs that don’t operate school buses, so the students who don’t drive have to rely on local bus service. To accommodate those students, the routes that serve the schools have special school trips, where the buses deviate from their regular routes to provide more convenient service.

Both CTA and Pace buses offer student discounts. On weekdays, between 5:30 a.m. and 8:30 pm., CTA lets students pay 75 cents per trip for both buses and ‘L’ trains and make transfers for 15 cents, while Pace lets students pay $1 per trip and 20 cents for transfers. Pace also offers 30-day, $30 reduced fair pass that, unlike the student discounts, works during late evenings and weekends. 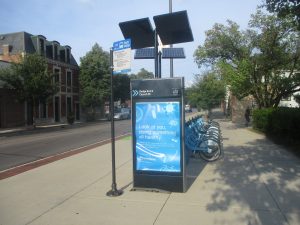 This stop, which is located across the street from Evanston Township High School, currently serves CTA Route 205 and Pace Route 208. (Photo by Igor Studenkov/for Chronicle Media)

Route 205 is a weekday-only bus that runs parallel to the Purple ‘L’ line tracks along Chicago Avenue in Evanston between Howard and Davis ‘L’ stations, then along Church Street until it reaches ETHS, then west on Dodge Avenue, then north on Emerson Street/Golf Road until it reaches Westfield Old Orchard Mall, then continues north along Grant Street until it reaches Skokie’s Cook County courthouse. Before and after school, it veers off the usual routing west of ETHS to pick up some students along Evanston portion of Grant Street.

Route 208 primarily runs along Golf Road between Davis ‘L’ station and Schaumburg’s Northwest Transportation Center. After it stops at Old Orchard Mall, it turns south on Skokie Boulevard and continues along Church Street, serving ETHS along the way. Unlike the other two routes, it operates seven days a week.

As previously reported by the Chronicle, the original Phase 1 changes called for Route 205 to be eliminated. To make up for it, the two agencies proposed extending Route 213 north to cover the Chicago Avenue portion of the route and changing Route 208 to follow the Route 205’s Davis-to-Old Orchard portion. The original plans also called for Route 213 to provide two trips — one before school and one after — that would follow Chicago Avenue to ETHS portion of Route 205.

The plans also called for combining Route 213’s two branches into one — the Northbrook Court branch would be kept and extended to Highland Park Metra station, while the Green Bay Road routing would be eliminated. The plan also called for change to rush hour service frequencies. Instead of running roughly once every 15-20 minutes between the Davis ‘L’ station and Lake-Cook Road and once every 30 minutes on the branches, the buses would run once every 20 minutes between Davis Street and downtown Winnetka and every 40 minutes on the portion to the north.

complained that the two school trips weren’t nearly enough to meet the students’ needs. While Pace emphasized that there were several less direct, but convenient transfer options, the speakers argued that it was inadequate. 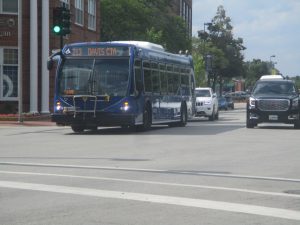 During the same hearing, Frank Lamberti, the Transportation Manager at New Trier High School argued that reducing Route 213’s frequency north of downtown Winnetka would hurt his school’s students — the buses will be more crowded and students would be more likely to arrive late.

Route 213 stops within walking distance of New Trier’s Winnetka campus. For students traveling to Northfield campus, the route makes one school trip in each direction to the campus directly. The rest of the time, students can transfer to Route 423 in downtown Winnetka.

In response to these concerns, Pace agreed to increase the number of school trips to ETHS to five in each direction, while CTA agreed to create two school trips for Route 206 that followed the same routing — one to ETHS in the morning and one from ETHS in the afternoon. The Route 213 school trips will run once every half-hour.

Between the school trips and the regular trips, the rush-hour frequency for Chicago Avenue portion of Route 213 would be at 15 minutes — which will actually be an improvement over Route 205’s 20-30minute rush hour frequency. And Pace agreed to not to decrease the rush hour service frequency north of downtown Winnetka quite as drastically as it originally planned — the buses will run once every 30 minutes.

According to Pace spokesperson Maggie Daly Skoggsbakken, the school trips to New Trier’s Northfield campus will remain the same as before.

CTA and Pace’s Boards of Directors approved the modified version of Phase 1 changes during their respective regular June 2018 meetings. While the Pace service changes kicked in on Aug. 13, Route 205 isn’t expected to be discontinued until Sept. 4.

Daly Skoggsbakken told the Chronicle that Pace is planning extensive outreach to students and general riders to let them know about the service changes.

“We’ve developed custom school guides for ETHS that will be given to the high school in both print and digital formats,” she said. 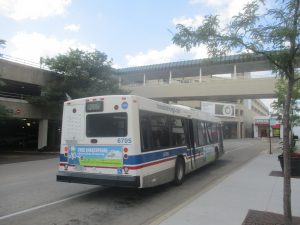 Westbound CTA Route 205 bus leaves Old Orchard Mall. The route is scheduled to be discontinued at the beginning of September. (Photo by Igor Studenkov/for Chronicle Media

Daly Skoggsbakken also said that Pace is planning to do transit ambassador outreach for this week and next week at Davis ‘L’ station, Old Orchard Shopping Center and possibly on the buses themselves. They were also planning to have staff out on Aug. 27 — the first day of school at ETH — and on Sept. 4.

The Chronicle reached out to the affected high schools. Nicole Dizon, New Trier’s Director of Communications, said that, in addition to having Lamberti raise concerns at the April hearing, the school sent a letter to Pace’s Board of Directors – and New Trier officials have been pleased by the transit agency’s willingness to work with them.

“In our conversation, they’ve been very cooperative, they have been responsive to our concerns,” she said.

ETHS did not respond to request for comment by deadline. But Jessica Hyink, the City of Evanston’s Transportation and Mobility Coordinator, told the Chronicle that she was pleased that the two transit agencies took community feedback into account.

“The response from Pace and CTA shows a clear understanding of the needs of our community, particularly Evanston Township High School,’ she said. “The new proposal provides service at the right frequency to ETHS, and the addition of Saturday service on the proposed Pace 213 route addresses equity issues for our transit riders.”