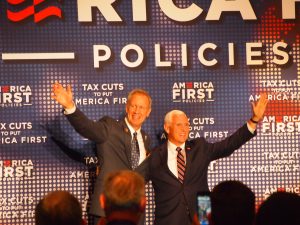 Vice President Mike Pence says there is only one way to view the 18 months since President Donald Trump’s administration took office.

Speaking before a gathering of supporters at the Westin O’Hare on his “Tax Cuts to Put America First” tour, Pence said jobs and opportunities are flourishing in America as a result of the tax cuts that were passed.

“From Day 1 of this administration, President Trump has taken action to get this economy moving again and the results speak for themselves,” Pence said. “In every decision we’ve made, we’ve focused on strengthening what makes America great: our families, our factories and our farmers.

“This president promised to roll back the heavy hand of government and in the last year and a half, President Trump has signed more laws rolling back federal red tape than any president in American history.”

Pence said the administration has completely obliterated its campaign promise of removing two federal regulations for every new rule that was put on the books. He said with the support of a Republican-led Congress there have been 22 regulations rescinded for every new law enacted.

He also praised the president, saying that Trump put America first when he withdrew the country from “the disastrous Paris Climate Agreement.” 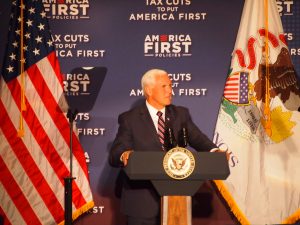 Pence said the administration continues to stand up for American jobs and American workers because countries have been taking advantage of the United States for too long on trade.

“The president has taken decisive action to defend America’s steel and aluminum industries that are truly the backbone of our economy and our security; and he promised to deliver for America’s farmers and producers, just like they deliver for us each and every day all across the state of Illinois,” Pence said.

He said being from neighboring Indiana he well knows that Illinois is home to more than 70,000 farmers and is one of the nation’s top producers of corn.

“To all our friends across the heartland of America, all that work on the farm and around the farm, we’re forging new and better trade deals for the American farm,” Pence said.

Pence was interrupted six times during his speech by protesters. Each time the crowd drowned out the protester with shouts of “USA! USA!”

As one protester was being escorted from the event, one supporter yelled out,” Go home, Commie scum!”

Near the end of his presentation, the 17th he has given around the country so far, Pence praised U.S. Rep. Peter Roskam, a Wheaton Republican expected to be in a tough reelection bid in the 6th Congressional District. 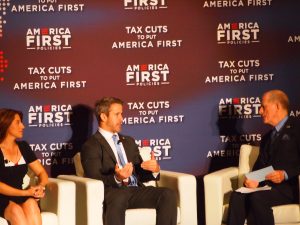 As Pence was singing Roskam’s praises, a protester stood and called out “Peter Roskam? Peter Roskam? Anybody seen Peter Roskam? I can’t see him” — a shot at Roskam who has been criticized for his limited public appearances over recent months.

Toward the end of his speech, Pence acknowledged the interruptions as he quipped, “I’m glad for almost everybody that came out.”

Before Pence’s appearance, a discussion was held about the benefits of the tax cuts.

U.S. Rep. Adam Kinzinger of Illinois’ 16th District said that the cuts have benefited businesses as well as workers.

“You can’t argue that the tax cuts haven’t helped the economy,” the Channahon Republican said.

He also said people will vote their pocketbooks and support Illinois’ Republican congressional delegation that voted for the tax cuts.

“There is not going to be the blue wave that some predicted,” Kinzinger said.

Nicole Wolter, president and CEO of HM Manufacturing, a custom gear creator in Wauconda, said that as a result of the tax cuts she has given employees raises and bonuses, continued picking up 100 percent of employees’ health coverage and will purchase $500,000 in new equipment this fall.

“We want to give back to the community,” she said of the business’s philosophy.

He added the tariffs being imposed will make America a more self-sufficient country.