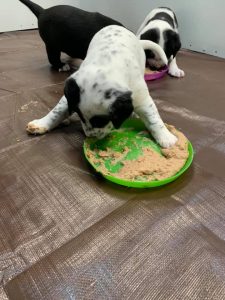 Even as Illinois is trying to slow the spread of COVID-19 by trying to get everyone to stay indoors as much as possible, there are still people who are interested in adopting pets. They just need to find a shelter that still does them.

As the pandemic spread, every single animal shelter and animal control facility in the region pared down its operations. Many suspended pet adoptions altogether and the few that still have them developed ways to minimize interpersonal interactions as much as possible. While this made the process longer, there are still plenty of people who are willing to go through it.

For those shelters, it isn’t simply out getting the pets out of the shelter. As the pandemic continues, there is a growing concern that more and more pet owners get laid off and/or face health issues of their own, they would struggle to take care of their pets and surrender the pets at the shelters, overwhelming the facilities.

Under Gov. J.B. Pritzker’s stay-at-home order, animal shelters are considered essential businesses, so they are still allowed to operate. However, in order to slow the spread of COVID-19, all of them have either closed to the public altogether or switched to an appointment-only model. All reduced their services and staffing. To further reduce the risk of infections, they are either not accepting or restricting food, toy and supply donations, urging residents to donate money instead.

Like many other pet care organizations throughout, West Suburban Humane Society has been trying to get as many animals out of its shelter as possible. According to its website, most of the animals have either been adopted or taken into shorter-term foster care, thanks to willing volunteers. The remaining pets are being cared for. And, like many other shelters, it put up a wait list for anyone interested in adopting pets.

According to its Facebook page, Kendall County Animal Control and Adoption Center currently suspended adoptions — though they are trying to put pets in the hands of their local animal rescue organizations. And, according to its website, it isn’t accepting pet surrenders, either.

DuPage County Animal Services is among several shelters that changed the adoption process to reduce the person-to-person interactions as much as possible. Interested residents can look up the pet online, contact a staff person to let the shelter know that they’re interested and fill out an application online. If the application is approved, the staff schedules an appointment where the applicant can meet a pet and, if the applicant is still interested, take the pet home right away.

At the same time, the animal services are conscious about the limits on the space they have to work with. While they are still accepting strays, they want to try to avoid taking pets unless there are no other options.

“In times of emergency, we are concerned of the potential for a space crisis that could affect our ability to find live outcomes for animals.” their statement said. “Our staff is available to discuss possible resources to help you keep your pet or safely rehome your pet on your own.”

In DeKalb County, the shelters are taking a similar approach when it comes to adoption. The Barn on Baseline Animal Shelter & Adoption Center, of Genoa, set up online profiles of available pets. If residents see any pet that interests them, they can schedule an appointment. Residents can also tell the staff what kind of pets they would be interested in — if the shelter gets any pets that matches the descriptions, it will contact the residents and set up an appointment.

Tails Humane Society, of the City of DeKalb, began to set up an online adoption process on March 22, which remains a work in progress. It is currently accepting short-term fostering applications. According to the March 22 Facebook status update, there has been no shortage of applicants.

“We have received an amazing response to our request and there have been almost 100 new applications submitted,” it stated. “Our team is working through them as quickly and efficiently as we can and we will be contacting fosters in the order of which their application was received.”

Like other shelters, they accept owners surrendering pets, though it urged the owners not to do that unless they have an emergency situation. 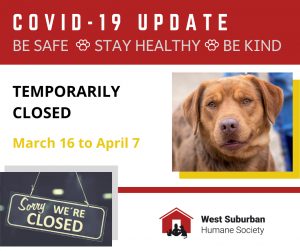 The Humane Society of Aurora was able to address the space issue quickly, at least for now. When the stay-at-home order was announced, it suspended adoptions. But before the shelter closed to the public, it worked with the City of Aurora to temporarily place all 24 pets that were awaiting adoption with their volunteers. The organization has been using its Facebook page to update residents on the status of those pets, as well as to spotlight pets that would be available for adoption once the health situation improves.

Hinsdale Humane Society is among a few that’s taking the approach similar to the DuPage County Animal Services. Robin Carroll, the organization’s marketing and public relations director, told the Chronicle that interested residents can look up available pets online and fill out an application. They then do an interview with an adoption councilor, and, if they decide to adopt the pet, they set up an appointment to see the pet. While normally, they like to have the entire household meet the prospective adoptee, due to concerns about infections, they only allow up to two family members to attend.

The process means that adaptations take longer, Carroll said — which is why they have been pleased to discover that they are still getting the same rate of adaptions as before.

“Over the last two weeks, most people are taking the pets home, so it’s been a wonderful,” Carroll said. “It’s pretty miraculous, when you think about it. It probably helps that we have puppies this week.”

She said they are optimistic that the rate will continue — which is important, since they are already starting to see cases of pet owners giving up their pets. Carroll cited a recent incident when a woman who couldn’t afford to take care of a sick pet.

“Those situations are going to start escalating, I’m sure, where people are going to be in dire need,” she said. “So we’re doing everything we can to get our animals out [of the shelter].”

Every single shelter is currently appealing to their communities for more funds as business drops. Carroll said that Hinsdale Humane Society is no exception.

“We are doing everything we can to keep our facility open,” she said. “We’re a non-for-profit, so we rely on support from the community and our friends.”

In fact, Carroll is encouraging everyone to donate to their local animal shelters.

“If we’re not your shelter, find a shelter near you to donate to, because they need your support,” she said.