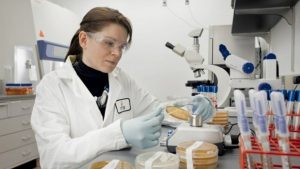 A German pharmaceutical company is expanding in Illinois, bringing hundreds of jobs.

Vetter Pharmaceuticals plans to build a million-square-foot facility in suburban Des Plaines. The company expects to hire up to 500 people once construction is finished.

The new jobs are a welcome sight in an industry worried about a number of mergers from 2015 resulting in job losses.

The northern Chicago suburbs are home to pharmaceutical companies Abbott, AbbVie and Baxter. Vetter makes sterile containers and pre-fillable syringes that possibly could benefit from being near other businesses in the region.

“We are excited about the positive outcomes this project can bring to the city of Des Plaines, and becoming a good and trustworthy neighbor to its residents,” Vetter Managing Director Peter Soelkner said in a release. “Several of our customers have requested commercial manufacturing resources both in the U.S. and Europe for their multi-faceted market production needs. Being in a continuous dialogue with them, such a facility would enlarge Vetter’s geographical manufacturing opportunities and thus increase our customer’s flexibility.”

Des Plaines City Manager Michael Bartholomew said Vetter likely will apply for a tax break from Cook County, but will still generate millions of dollars for the city.

“Even though they will be receiving a property-tax reduction, it will still generate between $1 million and $2 million in property taxes for the city,” he said.

Bartholomew said the property would normally be assessed at 25 percent of its value. If the company is granted a tax break, the assessment would be reduced to 10 percent of the value for 12 years.

“Vetter will create hundreds of quality, high-skill jobs for Illinois residents, growing their presence in Illinois with lots of opportunity for future growth,” Gov. Bruce Rauner said in a statement.

A spokeswoman for the Illinois Department of Commerce & Economic Opportunity said any tax incentives Vetter could receive from the state have not been finalized.

Andrea Friedman, the director of the Des Plaines Chamber of Commerce, said the area is conducive to corporate expansions.

“This location is appealing to a lot of larger companies because of the proximity to Chicago and (O’ Hare) airport,” she said.

Bartholomew said the city will hold a public hearing July 26 on Vetter’s planned development. He said a first step will be demolishing the existing structure, which previously held the Salvation Army.