Up to 20,000 people, a large percentage of them wearing blue Pokémon GO Fest entry wristbands, filled a secured north portion of Grant Park on July 22 in Chicago for Pokémon GO Fest.

But shortly after 3 p.m., organizers conceded that network servers couldn’t keep up with the demand for tickets holders to log in or to stay logged in to their phones to play the game. 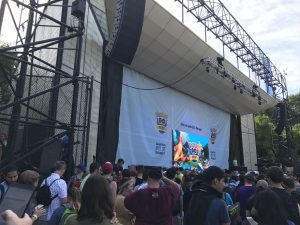 A global interactive event drew up to 20,000 people to Grant Park on Saturday, July 22. (Photo by Karie Angell Luc / for Chronicle Media)

Tickets were being refunded with attendees receiving poke coins ($100 value) on their Pokémon Go account.

“We know that this is not the day we had all envisioned but we appreciate your patience,” said Mike Quigley, chief marketing officer for Niantic, to the crowd.

“We hope you had fun today,” he said. 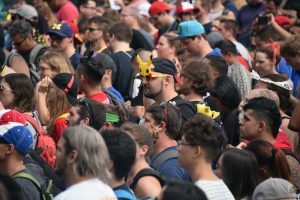 Players came from all over the world for the Pokémon GO Festt in Grant Park in Chicago on July 22, 2017. (Photo by Karie Angell Luc / for Chronicle Media)

Early in the morning before the event opened, backstage banter was upbeat as rain cleared to sunny skies at 74 degrees.

“The set up is sick,” said MYSTIC 7, a Youtuber who goes by that name and is renowned worldwide for garnering more than 1 million views on his videos. 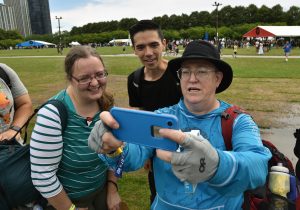 Right, Alice Rohrssen of Omaha, Nebraska poses for a selfie with YouTube celebrity who goes by the name of Trainer Tips. Images from Pokemon GO Fest in Grant Park in Chicago on July 22, 2017. (Photo by Karie Angell Luc / for Chronicle Media)

MYSTIC 7 was talking about how much he liked the way the event was set up to accommodate Pokémon Go fans belonging to the blue, yellow or red teams. Each team had its colored tent and lounge area.

“Globally, this is humongous because Pokémon GO Fest obviously is the first big event for Pokémon GO and it’s amazing because of that,” he said.

“But also because the entire world is involved in Pokémon GO Fest,” MYSTIC 7 also said. 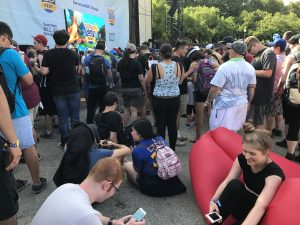 Organizers of Pokémon Go Fest in Grant Park conceded that network servers couldn’t keep up with the demand for tickets holders to log in or to stay logged in to their phones to play the game on Saturday, July 22. (Photo by Karie Angell Luc / for Chronicle Media)

“For the world of Pokémon GO, this is the biggest event of the year, by far.”

Downloaded more than 750 million times in its first year, Pokémon GO was played with special amenities for fans and ticket holders during the first live Pokémon GO event organized by Niantic.
“It’s great to see all of the happy, smiling people here,” said John Hanke, CEO of Niantic, Inc., shortly before the event opened.

“We made the game to give people something to do together with their friends and their family and this is like the ultimate version of that. “It’s fantastic to see it have a positive impact,” Hanke said. 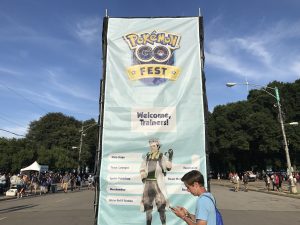 “It makes us just want to go and work on it and make it better,” he said.

There were boos by mid-morning directed to event organizers because many fans, some who paid second market prices into the thousands, with some traveling from locations such as Brazil, found they could not log into the game with networks overloaded.

“Fix the game!” was chanted by the crowd in front of the stage.

“It’s not loading,” complained one user who wished not to be named. 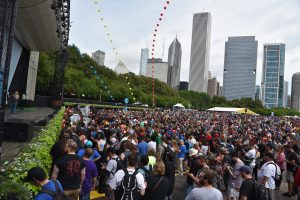 “I mean, we’re paying to be here and it’s not loading!”

Organizers promised the crowd they were working out internet access issues.

Later, when a live network in-park feed was shown on the stage screen, that connection fizzled with the video and audio breaking up. 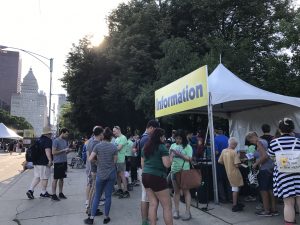 Early in the morning those gathered were upbeat for the Pokemon Go Fest at Grant Park in Chicago on Saturday, July 22. The event hit a major bump when servers could not keep up with demand and thousands of players could not load the game. (Photo by Karie Angell Luc / for Chronicle Media)

“They can’t get anything to work right,” grumbled a male Pokémon GO fan in the crowd.

By 5 p.m., attendees were told they’d receive a never-before released legendary Pokémon Lugia to their registered account for their trouble.

Despite the issues and paying $275 on eBay for a $20 face value wristband, Tim Paul, 21, of Muncie, Indiana, said it was worth coming.

“At least I am here because it’s a once in a lifetime event because it’s the first,” Paul said, who has a Pokémon trainer name as MortalSky.
“I am having a good time, I just think they could improve on some things. 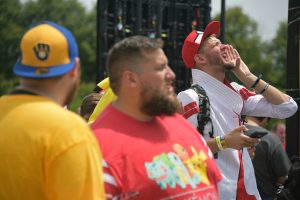 A man who asked to not be name identified leads the crowd in a chant protesting why the game isn’t fixed with people not be able to log into the game. Images from Pokemon GO Fest in Grant Park in Chicago on July 22, 2017. (Photo by Karie Angell Luc / for Chronicle Media)

“I really like the game but the event could be a lot better,” added Paul, who suggested that next time, Pokémon GO event ticket purchasers should pay by secure app to avoid what he said was a scalper, second market situation.

Tickets for Pokémon GO Fest went on sale last June 19 at 10 a.m. PDT on PokemonGoLive.com/Fest and sold out quickly that morning. 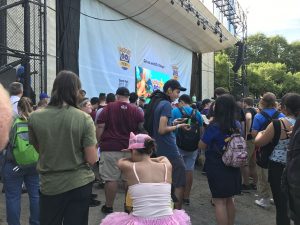 People traveled from all over the globe to attend the Pokémon GO Fest in Grant Park in Chicago on Saturday, July 22. (Photo by Karie Angell Luc / for Chronicle Media)

“Anybody can get involved with it,” Rohrssen said, who is in her 60s.

“For the older generation, to some extent, it’s about getting out walking, possibly playing with their kids or their grandchildren.

The Pokémon Company in Japan, manages the property outside of Asia and is responsible for brand management, licensing and marketing, the Pokémon Trading Card Game, the animated TV series, home entertainment  and the official Pokémon website.

Pokémon was launched in Japan in 1996.