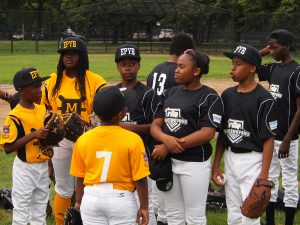 For Derrick Edmondson, playing in the Englewood Police Youth Baseball League is more than just heading to Hamilton Park twice a week for games and practices.

This is the fourth season for the league that aims to build relationships between police and the Englewood community on the city’s South Side. Coaches are current and retired police officers and members of the Omega Psi Phi Fraternity.

Practices and games take place Tuesday and Thursday evenings during the summer.

There are 100 boys and girls 9-13 registered for the program that has six teams named after old Negro League clubs and recent African-American leaders. The teams are the Barons, DuSables, Tigers, Monarchs, Washingtons and Sawyers.

“We have established three police youth baseball leagues across the city, and these leagues have been instrumental in building trust with our law enforcement officers as well as helping our youth build character and life skills,” Chicago police Supt. Eddie Johnson said. 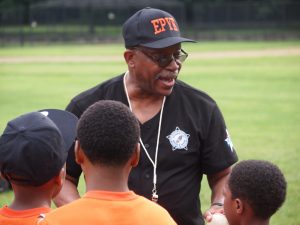 Coach Michael Meeks talks to his Tiger player prior to the start of their game. (Kevin Beese/Chronicle Media photo)

Besides teaching the youth baseball skills, the leagues also provide mentoring and life skills workshops covering topics such as conflict resolution, nutrition and violence prevention. Field trips are also part of the program, providing ways to expose the youth to different cultural experiences.

“I look forward to the season every summer,” said retired police Officer Marco Johnson, commissioner of the EPYBL. “We work hard to improve our players’ attitudes and conflict resolution knowledge so that we can stop the violence. If we work in collaboration, we can get it done.”

Marco Johnson noted that most of the coaches have been with him all four years of the program.

“It’s about the kids,” he said of the league he continues to run.

He said he wants the program to provide youth with skills to help them move forward in life.

“Our goal is to save as many kids as we can from violence and gangs,” Marco Johnson said. 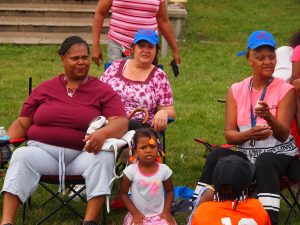 Fans check out the baseball action on the grass at Hamilton Park. (Kevin Beese/Chronicle Media photo)

Teamwork Englewood manages the league and financial support is provided by Get In Chicago. Other partners include the Chicago Police Department, Chicago Park District, Chicago Cubs Diamond Project and Stomping Out Drugs and Gangs.

Park District personnel see the program as a boost to the area.

“Hamilton Park is filled with parents and families on game day,” said Michael Lindsey, park director of Hamilton Park, located on the 500 block of West 72nd Street. “It’s great to see all the energy and excitement that the league brings to the community.”

Ricky Shannon was born in Englewood and is honored to be back on his home turf helping young people.

“When I got a chance, when they asked me to come back, I said, “Wow! I’ve never been involved in something like this,’” Shannon said. “We’ve got some pretty good kids. It’s great to work with them. They’re a headache sometimes, but I love the kids.” 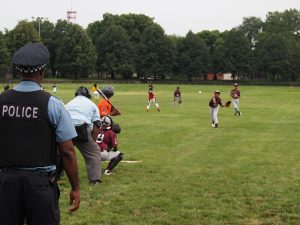 : Chicago police Officer Cortez Cox watches the Opening Day action at Hamilton Park as the Englewood Police Youth Baseball League gets underway. The baseball program is seen as a way to save kids from gangs and violence. (Kevin Beese/Chronicle Media photo)

Shannon told his Barons team prior to their first game — moved out onto the grass at Hamilton Park due to wet infields — not to get caught up in individual struggles.

“Don’t sweat it. If you strike out or get tagged out or you miss a ball, that’s OK,” Shannon told the youngsters. “That’s all part of baseball. You’re here to have fun.”

Cmdr. Kenneth Johnson of the Englewood District said that getting youth of the community involved in positive activities is a huge step in the right direction.

“It’s very special for me to be here with one of my most prized resources, our true agents of change for our community, our youth,” Kenneth Johnson said during Opening Day festivities inside the Hamilton Park field house. 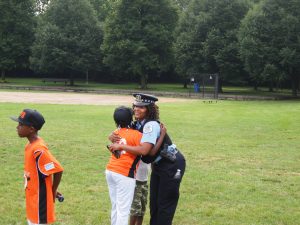 He said baseball is a sport that requires teamwork, dedication, discipline and organization, skills that the youth will need as they mature.