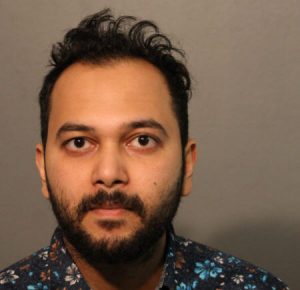 A food-delivery driver faces charges that he used his car to strike a woman and then fled the scene.

Aamir Mohammed, 30, a resident of Chicago’s 2300 block of West Rosemont Avenue, faces five charges in connection with the incident. He faces three felony counts — aggravated battery with a deadly weapon, aggravated battery causing great bodily harm and failure to report an injury-causing accident — and two misdemeanors — leaving the scene of an accident and driving when never issued a license.

Mohammed, a driver for Grubhub, was arrested at 10:51 p.m. Saturday, May 16, at the 19th District (Town Hall) police station. Police said Mohammed turned himself in after being identified as the wanted offender, who at 6:18 p.m. May 15 struck a 24-year-old woman with a Toyota Prius in the 3300 block of North Broadway and then fled the area.

Police said the victim sustained injuries to her shoulders, arms, pelvis, and head, and was transported to Illinois Masonic Hospital, where she was listed in stable condition.

Mohammed was placed into custody and charged after turning himself in, police said.

Police said Mohammed was parked near a crosswalk and had a verbal altercation with the woman. He struck her with his car and fled northbound Broadway, police said.

Mohammed’s next court appearance is scheduled for May 27 in