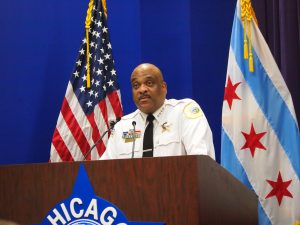 Sanchez said the raids kicked off the department’s summer initiative on narcotics sale.

Along with the raids, the department’s vice unit targeted 30 problem businesses on the South and West sides and issued more than 50 citations, Sanchez said.

In the raids, police seized eight vehicles, five handguns and a semi-automatic weapon.

Police Supt. Eddie Johnson added that 51 illegal guns were confiscated in the city on July 4, the highest number of illegal guns seized in one day so far this year. He noted that adding more than 1,500 officers to regular patrols for the July 4 holiday, saturating neighborhood parks and Downtown lakefront areas paid dividends.

Along with police nabbing 51 illegal guns, officers also made 26 arrests on gun-related charges on July 4.

“This tells me that officers were engaged and, as they do every night, they went out and risked their own lives to make neighborhoods safer,” Johnson said. “This is something that we just can’t lose sight of. It also shows me that we had officers in the right areas, but still what is troubling is that this is a very high number of individuals carrying guns on our streets.” 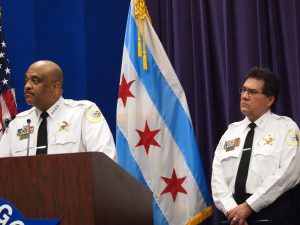 Johnson takes a question from the media while Noel Sanchez, chief of the Chicago Police Department’s Organized Crime Bureau, looks on. Sanchez said of the 104 felony arrests made by police July 5 and July 6, 76 of the individuals had prior felony convictions. (Kevin Beese/Chronicle Media photo)

Johnson said making this year’s July 4 holiday in the city safer than last year, when more than 100 people were shot, was due to targeted enforcement and high visibility from the police force. He said tactical and saturation teams supported district patrols by zeroing in on areas experiencing conflict, especially on the city’s West Side.

“The mission for these teams is simple: Go where the data tells you and be in the right places at the right time,” the city’s top cop said.

He said by studying what transpired last year, the department was able to make adjustments in policing strategies and see a reduction in violence.

“We did a deep dive into what went wrong last year, what didn’t work, and what did work,” Johnson said. “A data-driven strategy told us where to go in historical conflict areas and we went there.”

While pleased with the reduction in violence over the July 4 holiday, Johnson said it is not time to rest of the accomplishment.

“We still have a lot more work to do and all that says to me is ‘Continue doing what we’re doing and target the right people for the right reason,’” Johnson said. “There are still too many lives that have been affected by gun violence. We at CPD will continue to do our part to hold those who pull the trigger accountable for their actions, but that’s only one step. We need judges to help punish gun-crime offenders and create repercussions for repeatedly carrying guns.”

The police superintendent said it will take more than arresting individuals to reduce crime in the city.

“CPD also will do everything we can to foster positive community-building, and everyone has a hand in that,” he said. “It will take reinvestment in our poorest communities and job opportunities.”

Johnson said while police strategies helped lower crime during the July 4 holiday stretch, residents deserve credit too for the drop in crime.

“Don’t ever underestimate the power that these community organizations have in crime-fighting, as well as our faith-based community,” Johnson said. “Reducing crime in this city is not just a police issue; it’s all of our issue.”